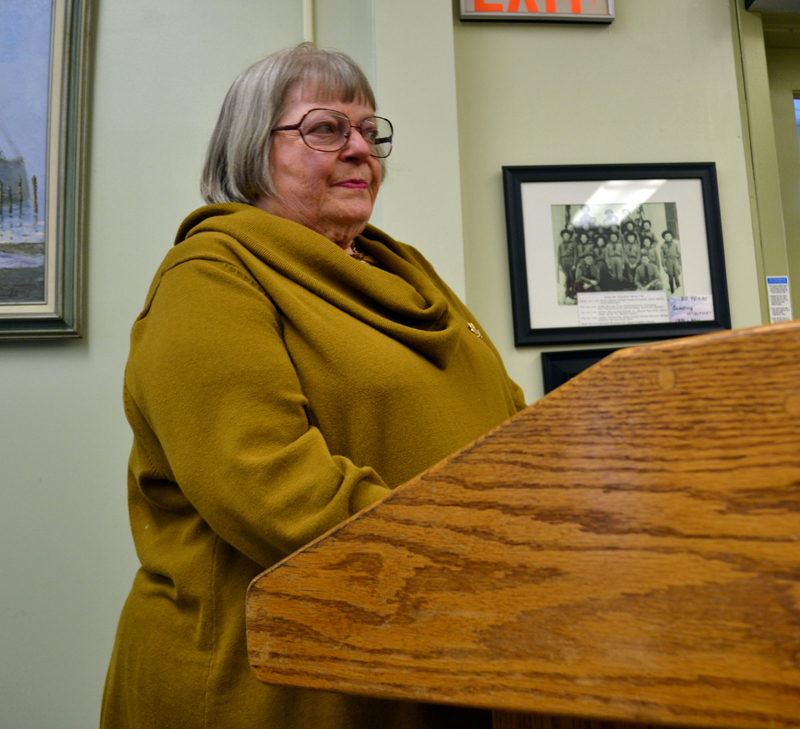 Wiscasset Historic Preservation Commissioner Susan Blagden asks for clarification about a Wiscasset Board of Selectmen motion to start the process necessary to repeal the historic preservation ordinance Tuesday, May 2. (Abigail Adams photo)

The Wiscasset Board of Selectmen has canceled a public hearing scheduled to discuss the removal of members of the Wiscasset Historic Preservation Commission, but has instead begun the process to repeal the historic preservation ordinance that established the commission.

After an executive session with town attorney Shana Mueller on Tuesday, May 2, the board of selectmen voted unanimously to cancel the hearing to discuss the removal of individual commissioners. They then voted unanimously to request a report from the ordinance review committee and the historic preservation commission on repealing the historic preservation ordinance.

The vote was taken in a matter of minutes and with no discussion. The subject did not appear on the agenda for the meeting.

The request for a report is the first step in the process to repeal the historic preservation ordinance, Mueller said. Several public hearings are required before bringing the repeal of the ordinance to a townwide vote, she said.

Blagden asked if the vote would have to wait until the annual town meeting in June 2018. Selectmen could hold a special town meeting to consider the ordinance’s repeal, Mueller said.

At their previous meeting, selectmen scheduled a public hearing for May 9 to discuss the removal of the current commissioners on the historic preservation commission. There have been several complaints from residents about mistreatment and inappropriate actions by the commission, selectmen said at the time.

The historic preservation ordinance requires a certificate of appropriateness as a pre-requisite for code enforcement officer approval of renovation and construction projects in Wiscasset’s historic district.

The commission recently voted to notify selectmen that it expects the Maine Department of Transportation to obtain a certificate of appropriateness for the downtown traffic project. The vote came after attorney Robert S. Hark, who is representing the Doering family in a lawsuit against the DOT, met with the commission.

“We request the commission formally advise the Maine DOT that its ordinance applies to its project … and that Maine DOT must apply for and obtain a certificate of appropriateness before it can lawfully start construction,” Hark said in his presentation to the commission.

Wiscasset is named as a party of interest in the lawsuit.

The Wiscasset Historic Preservation Ordinance was enacted at the 2015 annual town meeting.