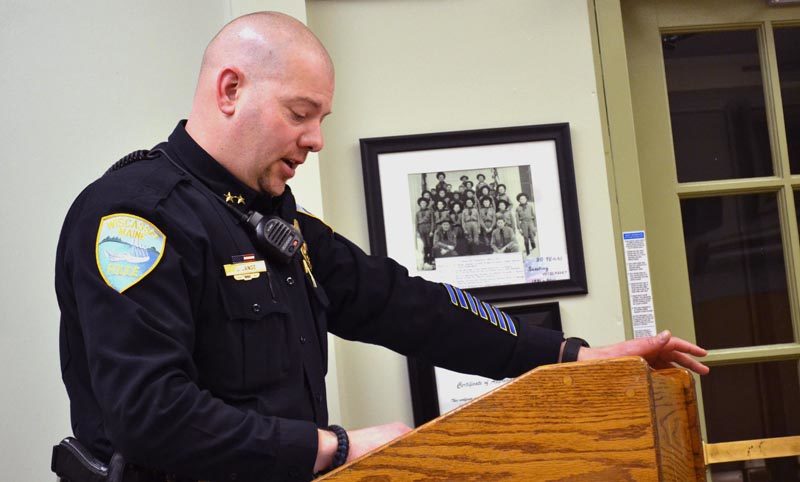 Wiscasset Police Chief Jeffrey Lange speaks to selectmen about granting the department’s full-time officers the authority to make arrests outside of Wiscasset at the Tuesday, Feb. 14 board of selectmen meeting. (Abigail Adams photo)

Full-time Wiscasset police officers will have the authority to arrest individuals outside town lines after the Wiscasset Board of Selectmen’s 4-1 vote on Tuesday, Feb. 14.

In response to an officer-involved shooting in Waldoboro in late January, Wiscasset Police Chief Jeffrey Lange asked the selectmen to take advantage of a Maine law that gives municipalities the option to allow their police officers to make arrests outside of their jurisdiction.

Newly elected Selectman Lawrence Gordon cast the only opposing vote to granting additional arrest authority, citing unfamiliarity with the law and concern about liability for the town if a police officer “does something they should not have done,” he said.

“We live in a sue-happy world,” Gordon said.

The request was an effort to get ahead of liability issues and limitations in the Wiscasset Police Department’s mutual aid agreements with neighboring law enforcement agencies, Lange said.

The issues were brought to the fore in the early morning hours of Jan. 22, Lange said, when several law enforcement agencies responded to an exchange of gunfire that left a Waldoboro resident dead and a Waldoboro police officer struck, but not seriously injured.

The Wiscasset Police Department was asked to provide coverage for calls throughout the southern part of the county while the Lincoln County Sheriff’s Office assisted at the scene, Lange said. However, Wiscasset police officers only had the ability to make an arrest outside of Wiscasset if a warrant was first obtained, or if they were in “fresh pursuit” of an individual for a crime the officer witnessed in Wiscasset.

“There will be an occasion when an officer will witness or is called to a serious crime outside their jurisdiction and will need to make an immediate arrest without having to obtain a warrant,” Lange said in a memo to selectmen outlining the request.

“By granting this authorization, the Wiscasset Police Department’s full-time officers will have the powers necessary when called upon for this type of coverage,” he said.

The statewide arrest authority will only apply to the department’s full-time officers who have completed academy training, Lange said.

The additional arrest authority also comes with immunity from lawsuits, and workers’ compensation, insurance, and other protections for officers operating outside of their jurisdiction, according to the state statute.

In the proposed policy to guide the Wiscasset Police Department’s implementation of the additional arrest authority, a warrant for arrest is the preferred course of action, especially when there is no danger involved, or risk that the individual will flee.

In the event officers do need to make an arrest outside of Wiscasset, there are strict notification requirements to follow to inform the Wiscasset police chief and the law enforcement agency of the jurisdiction where the arrest is to be made, according to the policy.

The arrest authority encompasses felony and misdemeanor crimes, according to state statute. Wiscasset police officers are prohibited from using their personal vehicles to stop an individual or transport an arrested individual, according to the policy.

The law enforcement agencies in Lincoln County rely on each other, Lange said. “They come and help us as much as we go and help them,” Lange said. The additional arrest authority is to “protect officers,” he said.