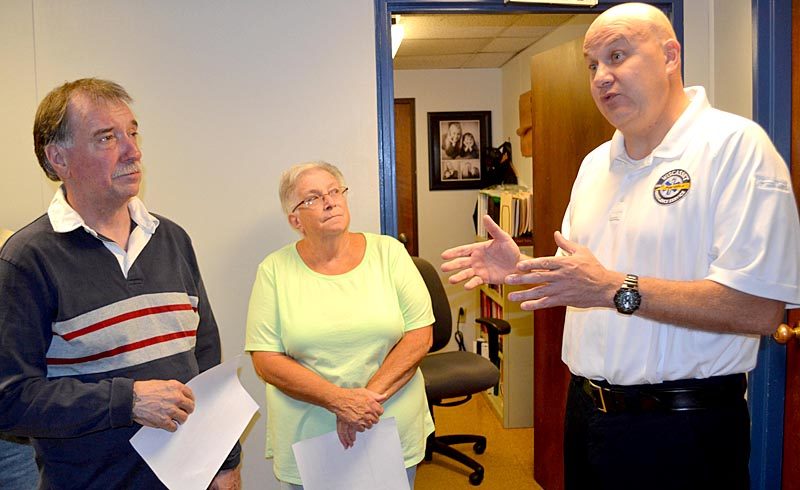 In an effort to get ahead of the budget-setting process for 2017-2018, the Wiscasset Board of Selectmen is touring town departments for a hands-on understanding of department needs. The tours kicked off Monday, Sept. 12 with Wiscasset’s public safety departments, and selectmen heard a laundry list of capital improvement requests – some of which needed to be filled yesterday, department heads said.

A grant is in the works to purchase the gear for staff, Martin said, but there is no guarantee it will be successful.

The ambulance service and the fire department are still in need of additional funds to install vents in both departments.

The ambulance service’s capital improvement plan lists additional staff as an immediate need. The additional staff is needed seven days a week, 12 hours a day and would come with an additional cost of $80,808, according to the plan.

Ambulance 87, one of the department’s two ambulances, is on its last legs and should have been replaced last year, Martin said. The 2003 ambulance has about 120,000 miles on it, and the typical lifespan of an ambulance is seven to eight years, Martin said.

A request to replace Ambulance 87 was previously submitted by former Director Roland Abbott for 2015-2016. However, the request was withdrawn due to pressure to reduce the ambulance service budget.

Voters authorized a capital improvement expenditure to refurbish Ambulance 87 in lieu of replacing it, and the refurbishment was completed about a year ago. Ideally, ambulances should be replaced every five years, Martin said.

The ambulance service is expanding quickly and is generating more revenue than anticipated, Martin said. The current budget covers staffing for a single truck, but with transfers on the rise, Martin would like to be able to staff two trucks, he said.

With mobile integrative care, or treatment of individuals in their homes, being the future of emergency medical services, the Wiscasset Ambulance Service is well-poised to take advantage of this future source of revenue, Martin said.

In Martin’s long-range plan for the ambulance service, the service’s growth would require staffing for three ambulances.

In touring the police department, Wiscasset selectmen were presented with the previous capital improvement plan, which the town did not follow, Wiscasset Police Chief Jeffrey Lange said.

The capital improvement expenditures are needed “to provide a professional public safety service for the citizens (the department) serves,” Lange wrote.

According to Lange, the expenditures could be offset by about 20 percent through grant applications, but only if he has the time to pursue those applications.

Currently, Lange is a “working chief,” or a chief responsible for patrol in addition to administration. Researching and applying for grants to reduce the burden on taxpayers would require the police chief to become a full-time administrator.

The fire department is in need of new turnout gear, Wiscasset Fire Chief T.J. Merry said. The request will appear before selectmen in the next budget season. The town also needs to prepare for the replacement of some of the department’s trucks, Merry said.

When Ladder 1 goes, it will not come back, and there will be no request to replace it with another ladder truck, Merry said. Repairs and maintenance to Ladder 1 put the department in the red two years in a row. The Bath Fire Department, Wiscasset’s mutual aid partner, has a ladder truck, Merry said, in explanation of why he could not justify requesting its replacement.

A heavy reserve truck, which has the capacity to transport equipment, carry a six-man crew, and pump water, could perform the duties of two of the department’s current trucks, Merry said.