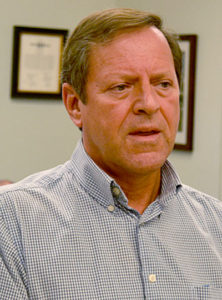 Maine Department of Transportation Project Manager Gerry Audibert speaks about the process that will follow the Wiscasset Board of Selectmen’s decision on a traffic proposal at the board’s meeting Monday, June 20. (Abigail Adams photo)

Despite a last-minute plea from downtown business owners, the Wiscasset Board of Selectmen voted unanimously to move forward with the Maine Department of Transportation’s option 2 to alleviate traffic congestion in Wiscasset at its Monday, June 20 meeting.

“This is going to kill the town,” a resident shouted during the vote. Option 2 will eliminate on-street parking between the intersections of Middle and Water streets with Route 1.

While several members of the board did not support option 2, which was one of three options presented, each said they felt a responsibility to vote in accordance with the results of a non-binding referendum question at Wiscasset’s June 14 town meeting.

Wiscasset voters chose option 2 by a 2-to-1 margin. The option garnered 426 votes. Option 1, which would have allowed for on-street parking on Route 1 between Middle and Water streets, had 90 votes.

Option 3, to do nothing, was the preferred choice of many downtown business owners – it received 206 votes at the polls.

According to several business owners, the election was flawed due to DOT posters placed near the polling location, which, they said, advocated for DOT’s preferred plan for downtown Wiscasset – option 2.

While DOT posters were displayed inside the Wiscasset Community Center, where the polls were located, flyers advocating for option 3 were not allowed to be distributed, even 250 feet outside of the polling location, said Tim Buckowski, proprietor of Showcase Antiques.

Once concerns were raised, DOT posters were taken down, selectmen said. According to the advice of town counsel, the posters did not constitute an election violation because they were informational, all three options were represented, and it was a non-binding referendum question.

Due to the wide margin by which option 2 passed, none of the selectmen felt the posters swayed the vote for one option or another, even though there were several aspects of the election that selectmen said they were unhappy with.

Downtown business owners and members of the Wiscasset Historic Preservation Commission again expressed their concerns about option 2, which many said would harm Wiscasset’s unique characteristics, force many downtown merchants out of business, and raise taxes as a result of maintenance.

Current trash cans on Main Street are not emptied and sidewalks are not plowed, business owners said, which made them question if the town would be able to maintain the expanded sidewalks and amenities included in option 2.

Erika Soule, owner of Rock, Paper, Scissors, pointed to Wiscasset’s current downtown municipal parking lot as an example of what will happen to the planned parking lot included in option 2.

The downtown parking lot has an enormous pothole, no lines, and is in disarray, Soule said. “We’re not taking care of what we currently have,” she said.

There is currently full occupancy in Wiscasset’s downtown, which is already a vibrant business community, Ralph H. Doering III, who owns several buildings on Main Street, said. With option 2, several of the business owners felt they would not be able to maintain their businesses year-round and would be forced to close.

The project in Wiscasset village still has a long road to go before it is “shovel-ready,” DOT Project Manager Gerry Audibert said. Construction probably won’t start until well after the 2017 date the DOT previously anticipated.

Board Chair Judy Colby questioned Audibert about the DOT’s process once selectmen make their decision. According to Audibert, the DOT project will now move from its conceptual phase into its design phase, which will involve a transition within the DOT and the assignment of a new project manager.

While not solidified, there is the possibility for a committee to form or for the DOT to work with special groups on the details of option 2, and to address the concerns of downtown business owners about access for delivery vehicles, customers’ ability to transport bulky items, and handicapped-accessibility, Audibert said.

“Are there issues? Yes. Some that probably haven’t even been identified yet,” Audibert said. “I can’t say we’ll make everyone happy, but we will do the best we can.”

Wiscasset will become responsible for maintenance and for covering the power costs of the traffic lights once work is complete, Audibert said. A contract clearly outlining the responsibilities of the town and the DOT will be developed when the project moves forward.

The DOT plans to access federal highway funds to complete the project in downtown Wiscasset, Audibert said. Once federal funds are committed to the project, there are stringent guidelines that must be followed. If committee work becomes contentious, federal law may prohibit the DOT from working in conjunction with a committee, because it may seem that the committee is trying to sway a federal process, he said.

There is currently no commitment from Wiscasset to complete the project, even with the board’s vote; once federal funds are involved, that will change, Audibert said. If the project is not carried out after federal dollars have been committed, those funds may have to be repaid, unless the project’s failure is due to an unforeseen circumstance, he said.

The DOT was not obligated to repay the federal funds that had been expended in the exploration of a bypass in Wiscasset, due to the discovery of an eagle’s nest, Audibert said.

According to Selectman Judy Flanagan, the board is guilty of not involving the public in DOT’s conceptual plans for downtown Wiscasset prior to the March meeting where the plans were first publicly presented.

Despite problems with the way the proposals for downtown Wiscasset were rolled out, Flanagan expressed hope that the community and the DOT would come together and find a way to make option 2 work. “I don’t think this will be the end of downtown,” she said.