After an executive session with the town attorney Tuesday, Dec. 20, the Wiscasset Board of Selectmen voted 3-1 to formally voice its objection to an energy conservation performance contract the Wiscasset School Committee voted to move forward with just days before.

The letter will be sent to the Wiscasset School Department, the school committee, the contractor that will perform the work, and the lending institutions Superintendent Heather Wilmot is currently negotiating with to secure financing for the project, according to the motion.

Wilmot is working to secure financing for the project. The 15-year loan will result in a net increase to the facilities and maintenance budget of $50,000-$60,000 a year, while the majority of the loan payments will be covered by energy savings resulting from the work.

The contract and Wilmot came under fire at the Wiscasset Board of Selectmen’s Dec. 6 meeting, with selectmen questioning how the school department could enter into a contract that would tie the town to a long-term debt obligation prior to voter approval.

The non-appropriation clause in the performance contract enables the school department to enter the contract without voter approval, because future loan payments for the work are contingent on voter approval of funding, Mueller said.

While not legally obligated to, the school committee could choose to modify the process to allow voter approval prior to entering into the contract, Mueller said.

The issue is not with the project, Colby said. “My concern is that an expenditure of this amount should be going to a townwide vote,” Colby said. “Taxpayers need to have that voice.” 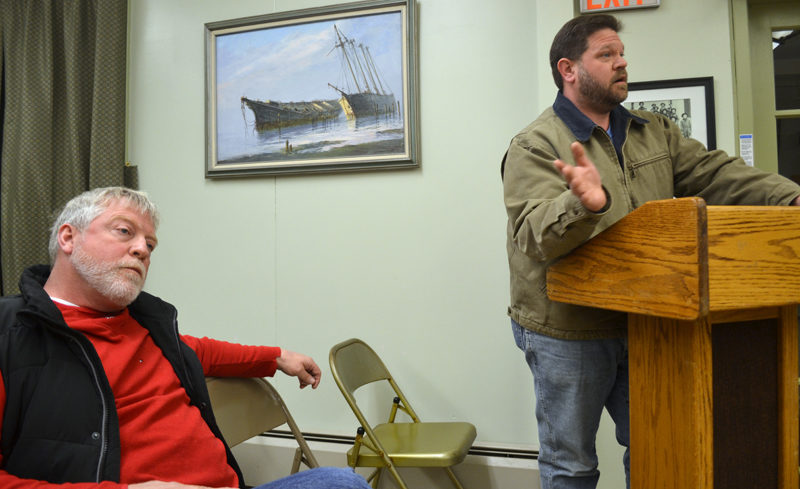 Wiscasset School Committee Chair Michael Dunn and Glen Craig were on hand for the selectmen’s Dec. 20 action, which Dunn said was “undermining the authority of the school committee” and jeopardizing a contract the school committee worked toward for more than a year.

Neither Dunn nor Craig were aware selectmen would be discussing the energy contract, they said. The executive session was added to the agenda mid-meeting.

Their exchange with selectmen was heated.

Rines said he was in disbelief at what he called the “arrogance of the school board” in “rubber-stamping” a $1.75 million contract.

Dunn referred to some of the comments selectmen made at their previous meeting as “rude” and “unprofessional.”

He said he took offense to the selectmen’s accusations that the school committee’s actions were underhanded.

The school committee followed the legal process for entering into the contract and every step was done publicly, Dunn said. None of the selectmen reached out to him or the superintendent to voice concerns previously.

Selectmen are the primary recipients of feedback from the community about the tax rate and are under pressure to keep it from rising, Mueller said.

“While there may be some communication issues between the two elected boards,” the feedback selectmen have received indicate there may not be support for the budget increase the project would cause, Mueller said.

In her experience, there has never been a “non-appropriation” event where voters rejected a budget that included payments for an energy conservation performance contract, she said.

The contract “does put the town at risk of a non-appropriation event,” Mueller said. “We don’t want that result.”

Selectmen were in consensus “this project could be great. They just feel it warrants a different process,” Mueller said.