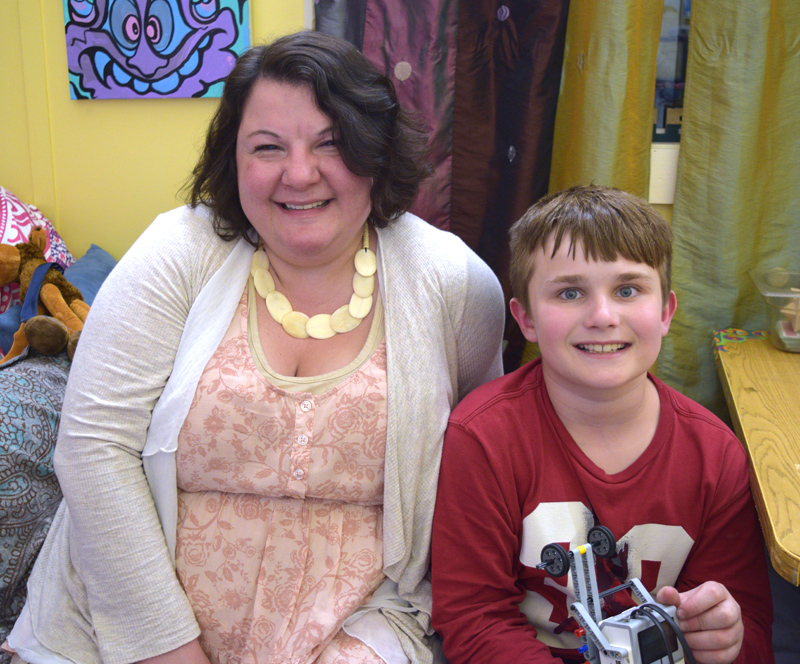 Rachel Hamlin, gifted-and-talented teacher at the Wiscasset School Department, with one of her students, Camden Larrabee. Camden designed and crafted a pedal extension for Hamlin’s daughter’s wheelchair. (Jessica Clifford photo)

Camden Larrabee, 12, of Wiscasset, is in both special education and gifted-and-talented classes at WMHS. He agreed to use his practical skills to help Boothbay Region Elementary School student Izabelle Hamlin.

Izabelle has epilepsy, “a central nervous system (neurological) disorder in which brain activity becomes abnormal, causing seizures or periods of unusual behavior, sensations, and sometimes loss of awareness,” according to the Mayo Clinic. She uses a wheelchair as an aid if she becomes exhausted or falls asleep due to seizures. 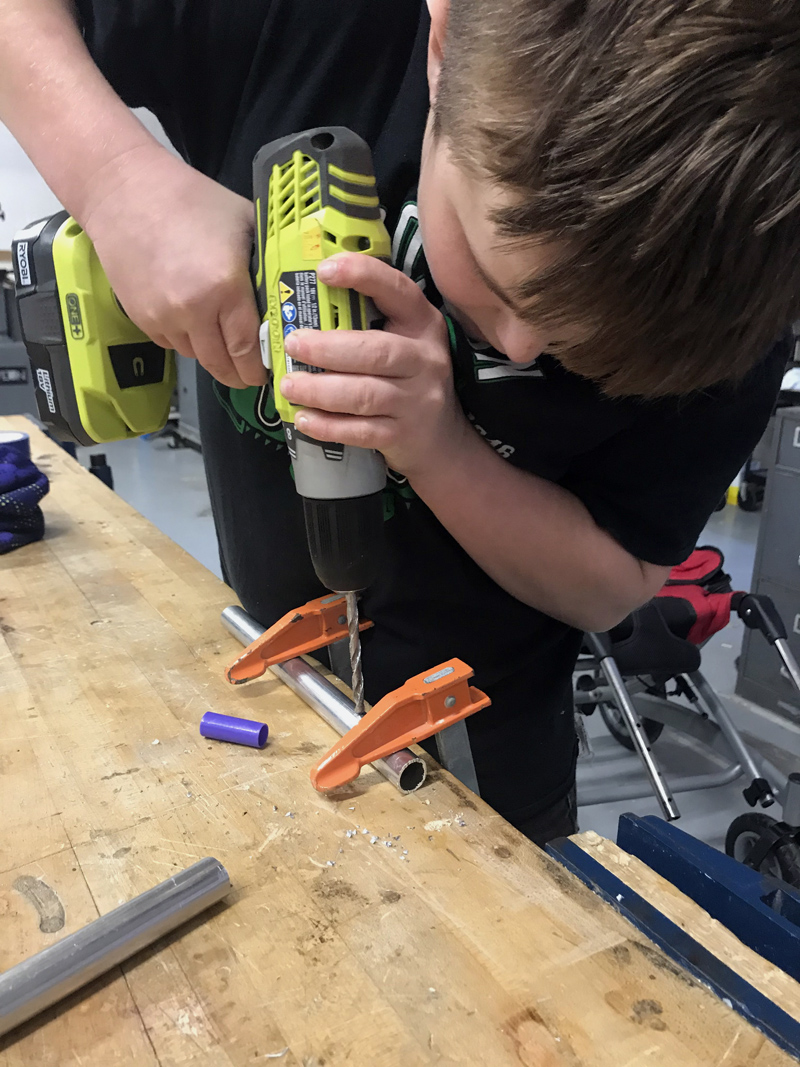 Camden Larrabee, 12, of Wiscasset, drills a hole in a metal tube, which he would go on to use as part of a pedal extension for another 12-year-old’s wheelchair. (Photo courtesy Rachel Hamlin)

Camden “lives and breathes building, engineering, and robotics, and anything that has to do with technology and apps,” Rachel Hamlin said.

“He might quit on math, and be like, ‘This is too hard,’ and get frustrated, but if he runs into any problems with something to do with robotics or engineering, he keeps trying,” she said.

The wheelchair Izabelle received from the state around the age of 7 is becoming too small for her legs. The foot pedal had been removed and Izabelle had to let her feet hang.

According to Rachel Hamlin, MaineCare will only cover one wheelchair every five years. Izabelle will be eligible for a replacement in October 2020. A new wheelchair would cost upward of $1,500.

A state case manager researched the possibility of buying a pedal extension for Izabelle’s Convaid wheelchair. Two months went by and no extension was found.

“It just dawned on me,” Rachel Hamlin said. “This is taking so long, why don’t we just ask a STEM student to do it?”

Rachel Hamlin contacted Jesse Hinman, the science, technology, engineering, and mathematics teacher for WMHS, to see if a student could make an extension for her daughter’s wheelchair.

Hinman pointed to Camden, a former student in his STEM class, as the right student for the job.

“I was going to open it up to an entire class, but once (Hinman) said, ‘Camden’s perfect,’ then we got the ball rolling,” Rachel Hamlin said. “And it was perfect. He was flawless.”

Before Camden designed and built the extension, Rachel Hamlin asked his mother if she would allow him to do the work. 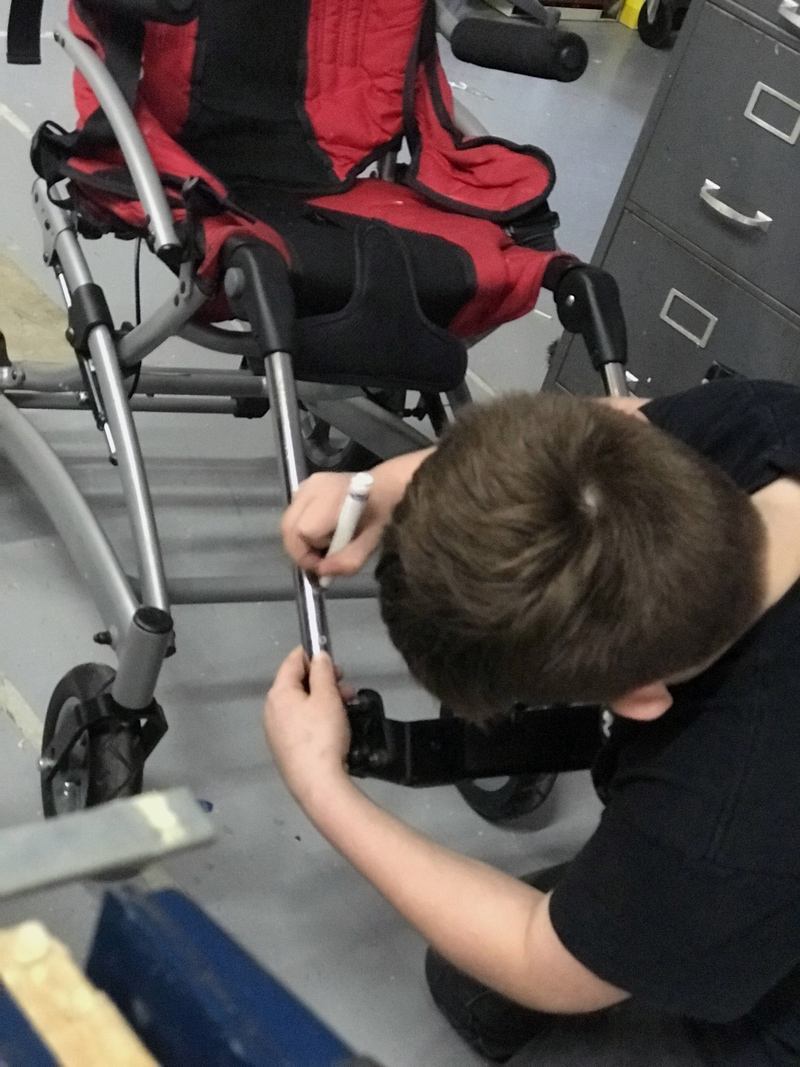 “When Rachel called me and he jumped at this chance to want to help someone else and do it, I took a step back and said, ‘This is all about him,’” said Camden’s mother, Lindsay Larrabee, who works as an educational technician at Wiscasset Elementary School.

Designing and building the extension took 40 minutes, Camden said. He described the process as fun.

The sixth grader took metal tubing from the STEM lab at school and cut it in half – one for each bar connecting to the single long foot pedal. He drilled holes into the metal so it could be screwed into the existing metal that previously held the foot pedal.

A few additional holes were drilled into the new tubes, so the foot pedal can be extended further if needed by screwing it into different positions on the old bars.

The foot pedal is back on and about 2 1/2 inches longer than before.

Izabelle received her improved chair on her birthday, just in time for her party at Build-A-Bear Workshop at The Maine Mall.

According to Rachel Hamlin, Izabelle’s condition has worsened. She has been diagnosed with Lennox-Gastaut syndrome.

The syndrome is a “severe condition characterized by recurrent seizures (epilepsy) that begin early in life,” according to the U.S. National Library of Medicine. “Affected individuals have multiple types of seizures, a particular pattern of brain activity (called slow spike-and-wave) … and impaired mental abilities.”

Camden and Izabelle have yet to meet.

“It’s so interesting to me. Here I am teaching another 12-year-old who has a very different brain than my child and a very different disability, but still he’s able to relate in some way to her because he has some of his own learning troubles,” Rachel Hamlin said. 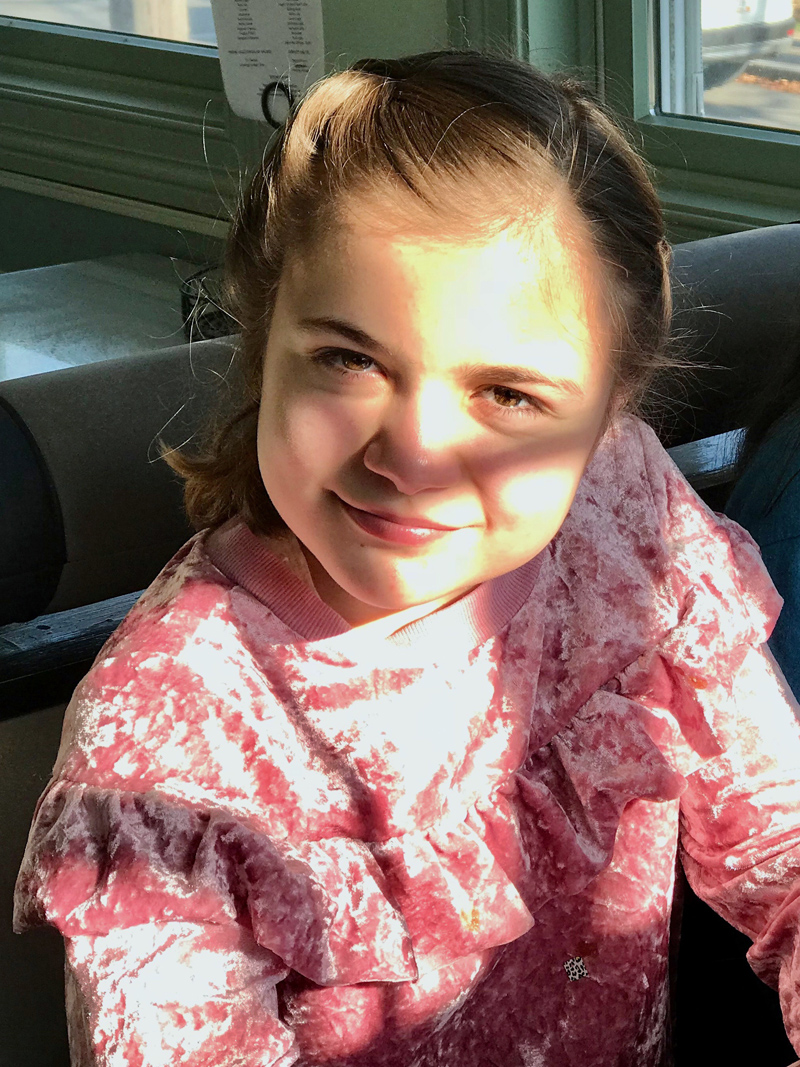 Izabelle Hamlin, 12, has epilepsy and uses a wheelchair. A Wiscasset Middle High School sixth grader designed and crafted a pedal extension for her wheelchair because it was becoming too small for her legs. (Photo courtesy Rachel Hamlin)

“What really pushed it over was a portfolio of all these really amazing projects he’s been working on outside of school,” Rachel Hamlin said.

At home, Camden helps his dad with mechanical work. He previously helped him build his playhouse.

Lindsay Larrabee said that for years, her son has visited the local transfer station to collect items from the “free for the taking” pile or the scrap metal pile and “he’ll come home and make things move with batteries and wires.”

Camden participated in the after-school robotics program Southern Maine Gearbots and has built drones with Hinman, the STEM teacher.

This year, Camden’s school schedule is broken into thirds, with his time divided between mainstream classes, special education classes, and gifted-and-talented classes.

This schedule allows him to complete academic goals and focus on his strengths, such as 3D printing and robotics, while also working on his weaknesses, such as math.

“That is something really special about Camden, that he is really gifted in many areas and then has a few areas to work on,” Rachel Hamlin said.

“I think there is a lot of misunderstanding about children who are gifted and have some disabilities,” Rachel Hamlin said. “People think that a child with a disability can’t be gifted.”