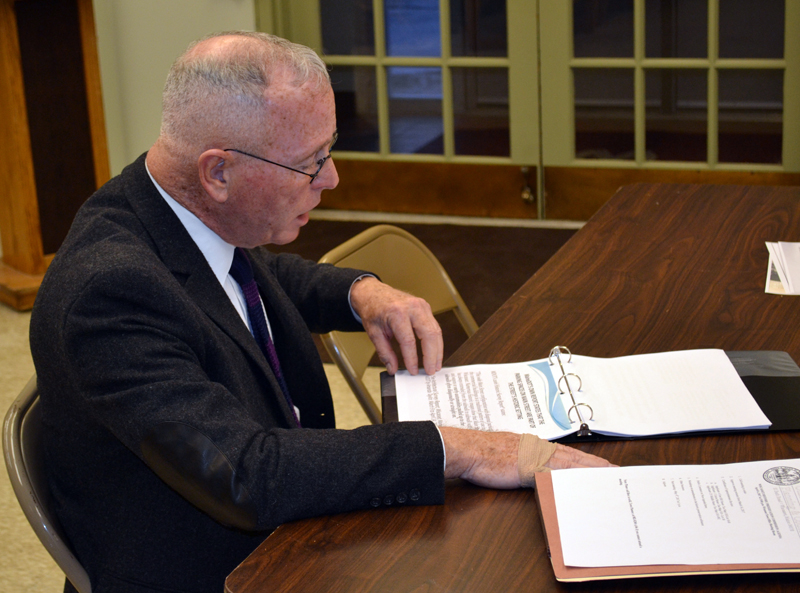 Attorney Robert Hark, who is representing the Doering family in a lawsuit against the Maine Department of Transportation, addresses the Wiscasset Hisotric Preservation Commission on Thursday, April 6. (Abigail Adams photo)

The Maine Department of Transportation’s traffic project in the works for downtown Wiscasset faces new obstacles in the form of a now-complete citizen’s petition and recent action by the Wiscasset Historic Preservation Commission.

The Wiscasset Taxpayer Alliance returned the petition to the town office Thursday, April 6. In circulation since January, the petition calls for a binding vote on the project.

There were 207 certified signatures on the petition, Town Clerk Linda Perry said. Citizen’s petitions must contain signatures from at least 10 percent of voters in the last gubernatorial election, which is about 179 in Wiscasset.

The petition must undergo a legal review and go to the Wiscasset Board of Selectmen, which will decide whether to send it to voters, Town Manager Marian Anderson said.

It is not clear whether the town has the ability to take binding action on some of the issues mentioned in the petition, such as DOT’s change from federal to state funding for the project, Anderson said.

The petition seeks to place the following question before voters: “to see if voters will disapprove and reject, by a binding referendum, the changes made by the Maine Department of Transportation to the Route 1/Main Street Option #2 Project approved by the voters in a June 2016 advisory referendum.”

The changes referenced in the petition, which the petition cites as cause for a new vote, include a decision to proceed with the project without federal funding; not complying with federal historic preservation standards; imposing the cost of amenities, upgrades, and maintenance of the project on the town; and no longer pursuing the construction of a new parking area on the Creamery Pier.

The petition will be discussed by selectmen at their Tuesday, April 18 meeting, Anderson said. “They’d be remiss in not putting it on the (annual town meeting) warrant,” said Bill Sutter, a spokesman for the Wiscasset Taxpayer Alliance. “It’s timely and important to the future of Wiscasset.”

A new vote is needed due to the changes the project has undergone since the June vote, Sutter said.

After the Wiscasset Historic Preservation Commission attended a DOT advisory committee meeting March 27, the downtown traffic project received renewed criticism from the commission. Attorney Robert Hark, who is representing the Doering family in a lawsuit against the DOT related to the project, attended the commission’s meeting Thursday, April 6.

In the litigation surrounding the project, the DOT has implied that it does not intend to seek a certificate of appropriateness from the commission before initiating construction, Hark said.

After a contentious discussion, the commission voted 4-1, with Chair John Reinhardt opposed, to send a formal letter to the Wiscasset Board of Selectmen informing the town that the commission expects the DOT to apply for a certificate of appropriateness once the project design is complete.

Commissioners James Kochan, Richard Thompson, and Susan Blagden pushed to send the letter directly to the DOT, but Town Planner Ben Averill discouraged such a step.

According to Averill, it would be inappropriate for the commission to act on behalf of the town in such a manner without the knowledge or consent of the selectmen.

At the beginning of the meeting, Thompson called for the commission to enter into an executive session. Asked to state the purpose of the executive session, Thompson first said “I don’t need a reason” then said it was to discuss personnel.

During the meeting, the commission denied a certificate of appropriateness a Fort Hill Street property owner applied for after building a fence on her property. Kochan made a motion to order the fence to be torn down.

Averill objected to the motion and reminded the commission that enforcement is outside the scope of its authority.

Kochan disagreed with Averill’s interpretation of the ordinance and argued it was within the commission’s right to recommend the fence’s removal.

The commission tabled another application for a certificate of appropriateness, despite the property owner saying the need for the certificate is delaying work on her Middle Street house.