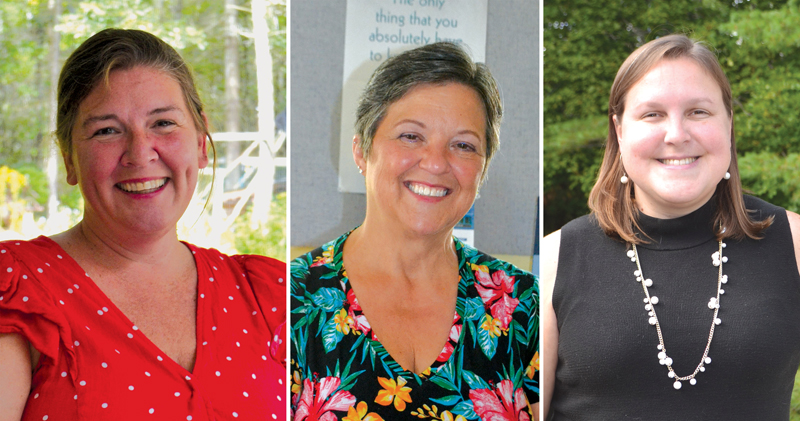 From left: Kimberly Andersson, Pamela Dunning, and Sarah Whitfield won election to the Wiscasset Board of Selectmen in a six-way race for three seats. (Charlotte Boynton photos)

Wiscasset voters elected Kimberly Andersson, Pamela Dunning, and Sarah Whitfield in a six-way race for three seats on the board of selectmen. During the annual town meeting by referendum Tuesday, Sept. 8, the voters also repealed the town’s historic preservation ordinance and approved ordinance changes to allow the redevelopment of the former Wiscasset Primary School.

Andersson, Dunning, and Whitfield received 227, 233, and 221 votes, respectively. William Maloney, Timothy Merry, and Benjamin Rines received 215, 186, and 167. Andersson and Rines were the only incumbents in the race.

The vote to repeal the historic preservation ordinance was 256-140. The warrant article was the result of a citizen’s petition.

Voters also authorized the school committee to transfer surplus funds into two reserve accounts and to make certain transfers to accommodate unexpected costs related to COVID-19, as long as the committee remains within the overall budget.

The voters opted to continue the two-step approval process for the education budget for another three years.

The voters approved changes to the building law, subdivision, and zoning ordinances, as well as the ordinance glossary. Two of those ordinance changes will clear the way for the transformation of the former school into housing.