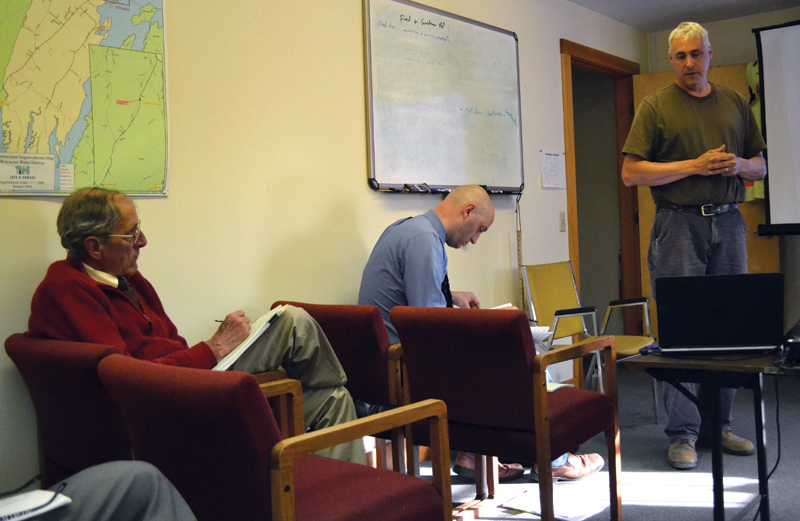 Few customers attended the Wiscasset Water District’s public hearing Tuesday, May 23 to hear the rationale behind the district’s proposal to implement sharp rate increases over the next two years.

The district must raise rates to counteract a growing deficit created by contract increases with the Bath Water District and increases in the debt service from waterline replacement projects, Superintendent Chris Cossette said.

Customers will have 30 days from the hearing date to file a petition with the Maine Public Utilities Commission and the district’s treasurer, which could either suspend or alter the rate increase, according to the Maine Office of the Public Advocate.

Fifteen percent of the district’s customers must sign on for the PUC to review the proposal. The Wiscasset Board of Selectmen previously voted to begin circulating the petition.

Lincoln County Administrator Carrie Kipfer attended the hearing. She will share the information from the hearing with the Lincoln County Board of Commissioners, which will determine the direction the county will follow, she said.

The percentages and the categories of customers are misleading, Cossette said. True numbers for the increases customers will see are based on the size of the water meter and usage. The average residential user will see an increase of about $43 a year, or 11 cents a day, Cossette said.

Wiscasset has 114 public hydrants, Cossette said. The costs of public fire protection will rise $33,249 in the first year and another $32,386 in 2018. With the warrant for the annual town meeting completed before the figures were announced, Wiscasset was unable to account for the increase in its budget for the coming fiscal year, Wiscasset Town Manager Marian Anderson has said.

The Wiscasset Water District also serves parts of Woolwich and Edgecomb. Cossette met with the Edgecomb Board of Selectmen on Monday, May 22 to answer questions about the rate increase. With only one hydrant on the system, Edgecomb’s rates will increase by about $200 in 2017, Cossette said.

Neither Edgecomb selectmen nor the customers at the hearing in Wiscasset questioned the need for the rate increase, but Cossette was questioned about its timing in both locations.

The water district is on a calendar year and the results of its audit and the recommendation for the rate increase came in March, Cossette said. Customers were immediately notified.

For the past two years, the water district has run a deficit, driven largely by the increased costs of its contract with the Bath Water District, which supplies Wiscasset.

The district has been operating “on a line of credit,” accountant Fred Brewer said. 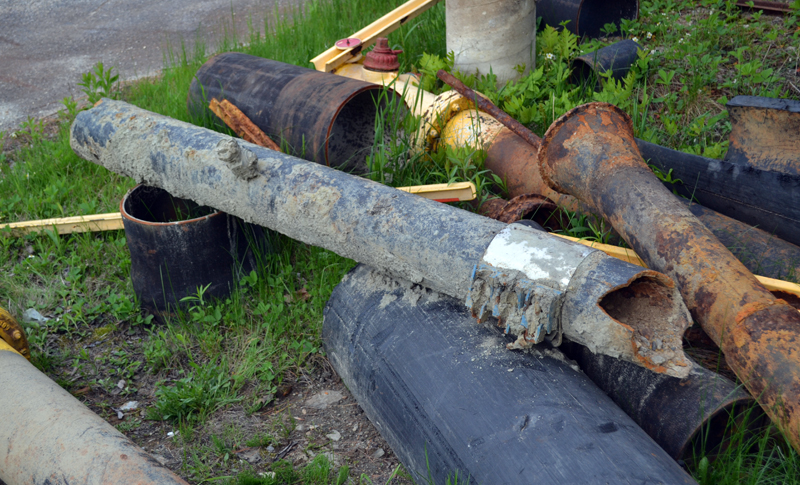 A section of water pipe more more than a century old, replaced as part of the Wiscasset Water District’s infrastructure improvement project, outside the district’s office Tuesday, May 23. (Abigail Adams photo)

In 2007, Wiscasset entered into an interconnection agreement with the Bath Water District. The agreement offered cost savings and long-term stability to both districts, Cossette said.

While the contract with Bath Water District accounts for the majority of the district’s expenses, it is far cheaper than the cost of building a water treatment facility, which would be “astronomical,” Cossette said. A conservative estimate for such a facility is $5 million to $10 million, he said.

The Wiscasset Water District has also embarked on several infrastructure improvement projects to replace its waterlines, which are over a century old. The district’s current project, to replace water lines on Flood Avenue, Gardiner Road, and in the downtown area, is the last of the district’s scheduled projects, Cossette said.

The projects have been funded through a combination of grants and loans with low interest rates. The district was able to secure a 2.5 percent interest rate for a 40-year loan on its current project, Brewer said.

“You’re not going to get much better than that,” Brewer said.

“These numbers are very important to us and speak to the work we do,” Cossette said.  Due to the funding for the project, the district was able to upgrade its infrastructure at only a fraction of the cost, he said.

However, a law that has since been overturned in the Legislature prevented utility companies from creating a capital improvement reserve to fund infrastructure projects, Cossette said.

The dramatic increase in rates was largely due to the district being unable to save in advance for the project. The project could only be included in customers’ rates after the district assumed the debt of the project, Cossette said.

With the targeted infrastructure projects complete and Wiscasset locked into future increases of 3 percent with the Bath Water District, the rates for customers will likely remain stable after 2018, barring unforeseen emergencies, Cossette said.

Economic development and more customers tying into the system are key to preventing future rate increases, Cossette said. Nearly 80 homes on public water were vacant two years ago, and the district lost a large customer with the closure of the Wiscasset Primary School, he said.

The reduction of revenue for the department has increased the cost for customers. The vacant homes are starting to sell and water is being turned back on at those addresses, Cossette said.

“The basic economic theory here is, the more the better,” Cossette said. The more customers use the system, the less service will cost, he said. The infrastructure is also critical to spurring economic growth, he said.

Cossette has already been invited to attend a meeting of the Edgecomb Economic Development Committee to discuss how the district can support future economic growth in Edgecomb, he said.