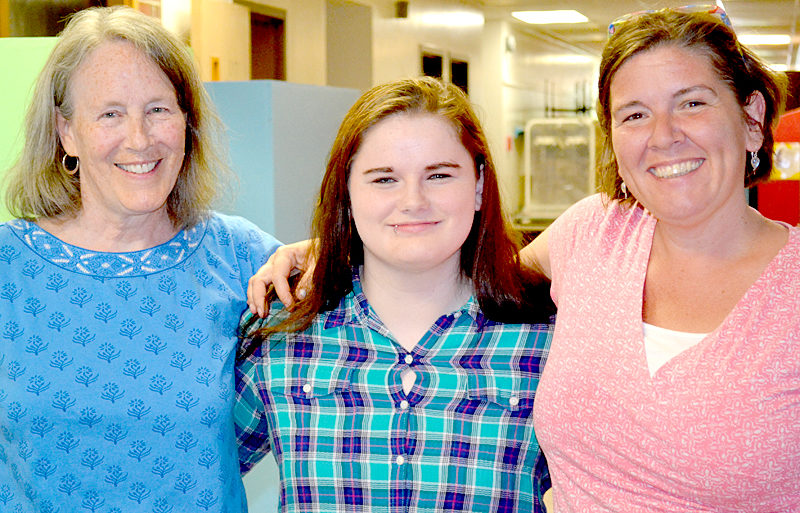 From left: Lucy Moses, Kayla Torgersen, and Kim Andersson in Wiscasset on Tuesday, July 19. Torgersen will return to the Wiscasset Middle High School as a senior on course to graduate with the class of 2017, due to the school’s ACT program. (Abigail Adams photo)

Wiscasset Middle High School junior Kayla Torgersen was in danger of flunking biology and English during the 2015-2016 school year, which would leave her without the credits necessary to graduate with the class of 2017.

Torgersen finished the school year with passing grades in both classes and will begin the 2016-2017 school year as a senior set on pursuing a college degree, all due to Wiscasset Middle High School’s new ACT program.

ACT, which stands for after-school credit recovery and teaching, was instituted in March for juniors and seniors short on credits for graduation. The idea is to “get your ACT back together,” tutor Lucy Moses said.

“I was having a rough year. I wasn’t doing the work on my own,” Torgersen said. “The teachers pushed me to do it.”

Four days a week, ACT tutors Kim Andersson and Moses gathered with about 13 students for two hours at the end of the school day. The quiet space, relaxed atmosphere, and individualized instruction helped four seniors graduate with the class of 2016 and several juniors achieve passing grades in classes needed for graduation.

Conversations about the creation of the program date back to January, Andersson said, when school administrators recognized some students would need extra support in order to graduate. Two months later, the program launched. For the remainder of the school year, students struggling academically were encouraged to attend the ACT program to make up their missing coursework.

Several factors contributed to the program’s success, Moses and Andersson said – it was voluntary, teachers coordinated closely with the ACT program about students’ missing coursework, and food was provided. According to Andersson, several area restaurants donated food for ACT program participants.

Initially, Torgersen said she was reluctant to attend the program. She ended up changing her work schedule so she could attend every day it was offered. “I was really sad when it was over,” she said.

In the relaxed atmosphere, Torgersen felt comfortable asking questions about things she didn’t understand – questions she never would have asked in front of an entire class during the school day, she said. In the small group, students also worked together to help each other study and complete assignments, Moses said.

“They were a bunch of Chatty Cathys, but it was usually about schoolwork, so it was okay,” Andersson said.

Torgersen achieved a B for the final semester of biology and credits the program, she said. One of the students in the ACT program made the honor roll for the final semester, Andersson said. However, due to the grading system in Wiscasset, which ranks everything below a 70 as an F, the highest grade students were able to achieve in the courses they were already flunking was a D, Andersson said.

The semester Torgersen participated in the ACT program “was the only semester that I haven’t failed a class,” she said.

For those who attended, the program worked, Moses said. Some students even suggested forming a homework club to create the space and support to keep up with their schoolwork.

“A lot of kids really liked the quiet, supportive place to do homework and get help,” Andersson said.

For Torgersen, halfway through her junior year she realized that if she wanted to graduate with her class she needed to get serious about schoolwork. She has been diagnosed with attention deficit hyperactivity disorder, or ADHD, and focusing has always been a struggle, she said.

Torgersen had spent the majority of her high school career in a state of panic because she was behind on her schoolwork. “It’s so much less stressful just to get it done,” she said.

Torgersen does not foresee needing the extra support of the ACT program for the upcoming school year. She is committed to keeping up with her schoolwork and graduating on June 1, 2017 – a graduation date she has memorized.

Currently an employee of McDonald’s, Torgersen has her sights set on a managerial position with the company. After graduation, Torgersen hopes to attend college and pursue a career in early childhood education with a focus on autism education.

Andersson and Moses don’t know if the ACT program will return in the 2016-2017 school year.

According to Special Education Director Jess Yates, who was influential in introducing the program, the school district is constantly assessing the needs of students, and “if similar needs present themselves next year, we will find a way to meet them.”

The hope is that students will develop good work habits and pass their classes throughout the school year so the program is not needed, Moses said.

However, if the ACT program is offered in 2016-2017, Torgersen said she will most likely attend, purely because she enjoyed it.