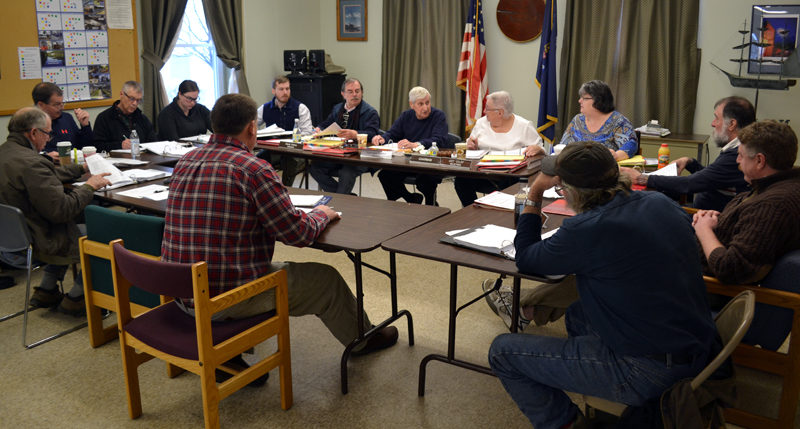 The Wiscasset Board of Selectmen and Wiscasset Budget Committee meets with department heads for a first look at the 2017-2018 budget Saturday, Feb. 25. (Abigail Adams photo)

Wiscasset’s municipal budget for the 2017-2018 fiscal year went through its first wave of scrutiny during a marathon meeting between the Wiscasset Board of Selectmen, Wiscasset Budget Committee, and department heads Saturday, Feb. 25.

The parks and recreation budget includes the largest increase and garnered the most debate among selectmen. Director Todd Souza submitted a revised proposal the day of his presentation, which included the addition of a full-time program coordinator.

The salary for the proposed position caused a jump in the 2017-2018 budget from the initially proposed $795,571 to $860,621. However, with the use of a recently established special revenue account, the portion of the department’s budget to be raised through taxes would remain the same, Souza said.

The parks and recreation department is currently at capacity with limited ability to raise additional revenue through programming, Souza said.

A full-time program coordinator would help offset the impact of the minimum wage increase by absorbing hours currently filled by part-time staff, Souza said. It would also enable the department to expand and organize additional revenue-generating programs and activities. 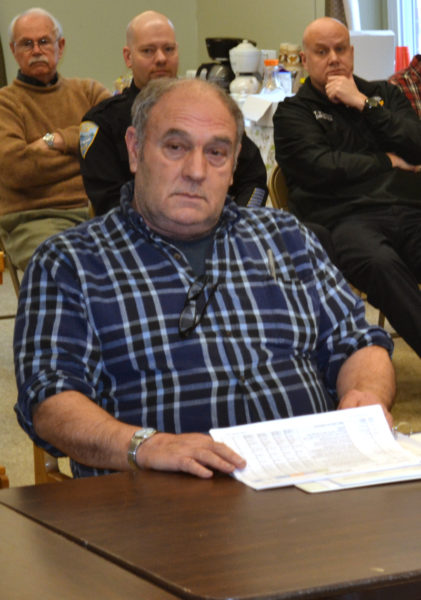 The relationship of the Wiscasset Community Center to neighboring municipalities was questioned at length by Selectman Lawrence Gordon. Gordon questioned whether neighboring communities were paying their fair share for the center, or if Wiscasset was subsidizing a service for surrounding towns.

The driving force of the increase is the proposed addition of a fourth staff member at the plant, Superintendent Buck Rines said. The plant is currently operating under a consent agreement with the Maine Department of Environmental Protection to remedy violations, and the DEP has recommended an additional staff member, Rines said.

Cleaning the sewer lines is, in itself, a three-person job, Rines said. With only three people on staff and an increase in administrative work, completing the cleanings is difficult, he said. “It’s going to back up on us, literally,” he said.

Taxpayer funds are typically not raised for the wastewater treatment plant, which supports itself through user fees, revenue, and surplus, according to the town report. The year-to-date revenue collected at the plant is about $230,000 with a projected revenue collection of $443,500 for the fiscal year, Rines said.

Due to selectmen’s authorization to use $33,000 in Wiscasset Ambulance Service revenue to hire additional staff mid-year, the service’s proposed budget of $555,431 is an 8.64 percent increase from its current budget of $511,250.

The wages will cover the addition of a third staff member from 8 a.m. to 6 p.m., Martin said. The budget also accounts for an additional $2,000 stipend for a supply person and a trainer, he said.

The Wiscasset Ambulance Service has already reached 92 percent of its projected revenue for the 2016-2017 fiscal year, Martin said. With 2,000 calls a year, the department may be able to become self-sufficient, but the additional calls will require additional staff, Martin said.

“It depends on your wishes,” Martin said. “Do you want us to expand or stay where we’re at?”

Town Manager Marian Anderson decided to reduce the proposed wage to $12 after determining the average wage in surrounding communities, she said.

The additional line items did not have a significant impact on the budget, due to a reduction in health care costs, as a result of a staff member choosing individual coverage instead of a family plan, Lange said.

The budget currently has no contingency if the staff member chooses a family plan in the future, Lange said, and may need to be revised to include it.

The public works budget was the only budget with a proposed decrease in 2017-2018. The proposed budget of $672,622 is a 1.07 percent decrease from the current budget of $679,944. A change in staff was largely responsible for the decrease, Director Doug Fowler said.

While the overall budget decreased, the salary for the public works director increased by 7.93 percent, from $59,160 in 2016-2017 to $63,852. The increase was made in an effort to bring the department head’s salaries in line, Anderson said.

As Wiscasset moves through its budget process for 2017-2018, department heads will once again appear before selectmen and the budget committee to present their capital improvement requests.