Lincoln County Quilters are hanging up their cutting boards and rotary wheels after a dozen years of making patriotic-themed quilts and giving them away to combat veterans. They started their quilting group in 2010 under the Quilts of Valor umbrella, and then switched to Quilts of Gratitude in 2015.

In their 12 years, they made and gave away between 200 and 250 quilts to veterans who saw combat or had boots on the ground in a combat area.

Originally they gave quilts away to just Jefferson veterans, but quickly expanded to all of Lincoln County and beyond.

They held ceremonies for veterans, the first at the Nobleboro Community Center. They quickly outgrew the space and then held ceremonies at the Waldoboro VFW, Wells-Hussey American Legion Post 42 in Damariscotta, and at the Winslow-Holbrook Merrill Post 1 in Rockland.

When COVID-19 hit, it took the wind out of the group’s sails. Not being able to have quilting parties, or ceremonies to honor veterans, was hard on the group. Not being able to present their labors of love to veterans in person was the final straw and led to Lincoln County Quilters disbandment.

In 2021, they mailed quilts to veterans, with the exception of a few that were delivered in person. Receiving quilts were Richard Hays of Jefferson, Todd Musial of Jefferson, Charilyn Benner-Campbell of Jefferson, Creig Mills of Jefferson, Joseph Ames of New Jersey (family ties in Jefferson), Raymond “Butch” Joslyn of Whitefield, Richard Cosra of Augusta, and Howard Wiley of Warren.

“Not doing a decent presentation because we were worried about the elderly getting out in the public,” was the number one reason Rancourt, president of the group, said of getting done.

“We are getting older,” Bailey added.

“We have had a lot of support” over the years, Peggy Jones said.

“I will miss it,” Zuchowski said.

“It was time. We are all getting grandbabies and are making quilts for them,” Rancourt added. 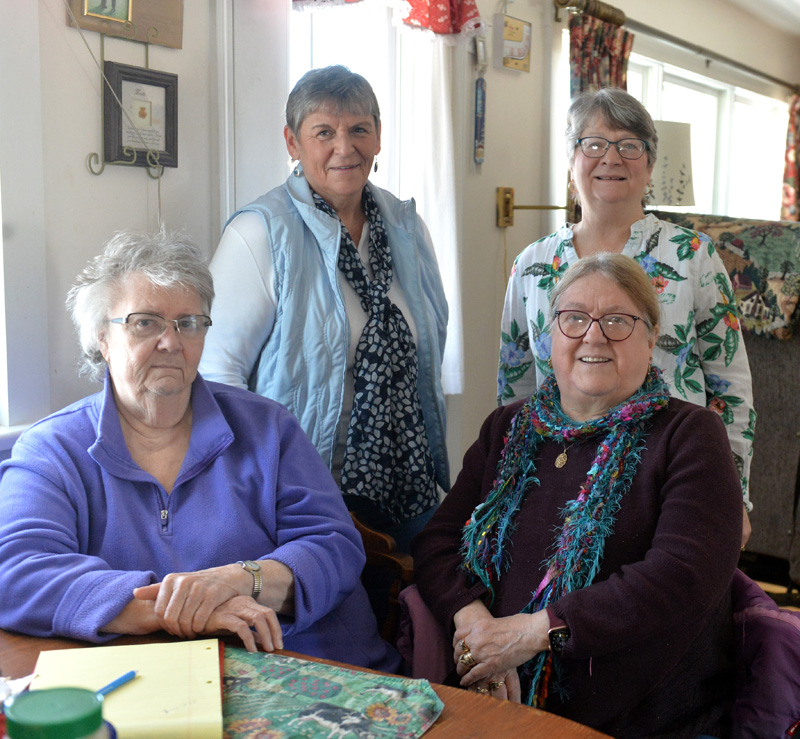 Rancourt said they are grateful to the Jefferson Fire Department who let them meet in their space. “They supported us for years.”

In addition, the quilting group received financial support from many individuals, and gifts of fabric, batting and other materials. Longarm quilters donated their time, thread, and batting.

“They were willing to help us no matter what. They even helped bind” the quilts, Rancourt said.

“We are one of few charitable organizations that did not need money,” Rancourt said of donations they have received.

“We are grateful for all the support we received,” Jones said.

During the two years of COVID, the group used up most of their red, white, and blue material. The balance of funds left in their kitty will be given to House in the Woods, a retreat for veterans, located in Lee.

“It is an awesome organization,” Rancourt said.

Bailey said what she will miss the most about Lincoln County Quilters, is not seeing the people anymore.

Rancourt said she will miss getting together, the laughs, and the personal relationships.

Jones said she will miss meeting the veterans.

“These quilts are going to be heirlooms. They will be passed down through the generations,” she said.

Zuchowski said she will miss the quilt presentations to veterans. “Just the families and veterans and their reactions were priceless.”

One veteran who was a Marine that saw heavy fighting in WWII, held Rancourt’s hand through the whole presentation.

“He was scared. Quite a few veterans could not be there in person, because their memories were so traumatized they could not bear to be in public,” Rancourt said.

The organization’s memorabilia will be given to the Jefferson Historical Society, including Union Fair ribbons, newspaper articles, state awards, and the Spirit of America Award they received from Willow Grange.

“Times have changed,” Zuchowski said of COVID, and the closing of many quilting fabric shops.

“We want to thank everyone who has supported us throughout the years,” she said.

“We are going to miss it. It is time to let younger people take over. I used to be able to sew all afternoon and half the night, but not anymore,” Rancourt said.