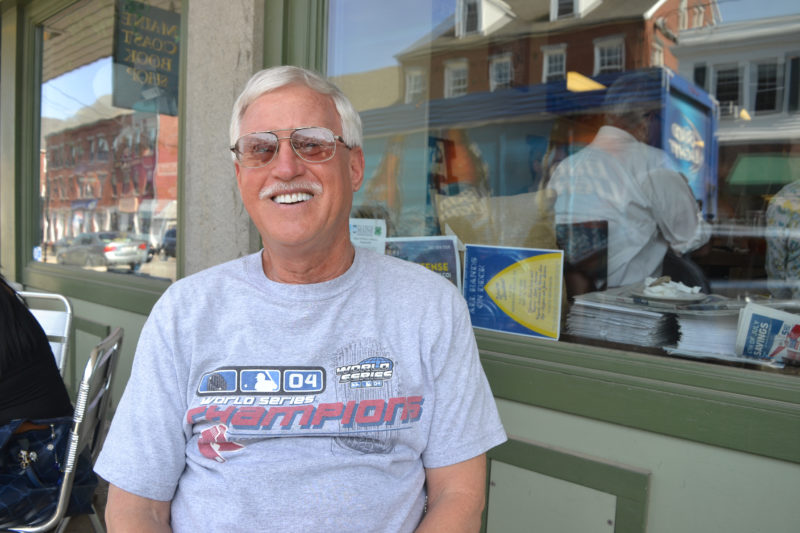 William Emrich, a summer resident of Damariscotta from Tampa, Fla., recently released a new book, “Have Racquet, Will Travel,” published by Haley’s, of Athol, Mass. It is the retiree’s second book, the first being “Wild Maine Adventure,” his 2016 book that tells the story of how he fulfilled a dream by building a secluded off-grid cabin on a pond in the Maine woods.

“This book is very different from the first book,” said Emrich in a recent interview in downtown Damariscotta. “The first one was about buying property, retiring, putting a cabin on the property. This book is really much more geared toward family and friends,” both in its coverage and its target audience.

Covering roughly two decades of the former tennis teacher’s life, “Have Racquet, Will Travel” – named after a plaque he received in the 1960s inscribed “Have Racquet, Will Travel” — follows Emrich from his time as a young man attending Tufts University in Boston to being in the U.S. Army in Vietnam to living in Venezuela in the early 1980s, where he taught tennis at a Caribbean resort and served as an English instructor for the country’s foreign minister at the time, Alberto Zambrano-Velasco. Numerous photographs are featured throughout the book (and, yes, a tennis racquet pops up a number of times along the way).

“I really realized when my father passed away several years ago that it was too late to talk about a lot of the details of his life,” Emrich said. “This is a response to that. I wanted to put in writing that special period of my life that my family didn’t know about. It’s certainly for my daughter to read, and her son …

“I did it based on the fact of what I regretted, (missing out on) the stories of my father and my mother, who passed away within six months of each other.”

In person, as he does in his book, Emrich likes to launch into stories about meaningful episodes in his life, some of them funny, like his time teaching tennis at the Macuto-Sheraton Hotel in Caracas.

“That was quite an experience,” he said. “They never even asked me if I could speak Spanish. That was something. I didn’t even speak basic Spanish and here I was trying to teach tennis as a tennis pro and I literally had to ask my wife to write down phrases like ‘bend your knees,’ ‘watch the ball,’ and ‘stand sideways to the net.’

“I realized, how the heck am I going to teach lessons in Spanish?”

He said he memorized four or five phrases “so that there was some basis to go on when I walked out on the court to teach. Fortunately, no one ever complained, but I am not sure what their inner thoughts were.”

Writing down one’s life story “is something I think people think about doing,” Emrich said. “I’m very lucky to still have my mind and health to do it.”

Emrich hopes to inspire others to write about their lives after reading his very personal book, “to get the fire going,” as he put it, so they can share parts of their lives on paper with family and friends.

“A lot of different things were going on and, really, my family didn’t know that period of my life,” said Emrich of the response of family members to his book. “Two of my sisters told me they found out things they never knew about my life. One sister has told me that several times.”

Does Emrich plan to write a third book?

“Yeah, I mean, it kinds of grows on you, doesn’t it?” he said. “I’d like to do a photography book, because I love photography and I’ve done some shows in Maine and Florida.

One can buy “Have Racquet, Will Travel” and “Wild Maine Adventure” at williamemrichbooks.com and at Sherman’s Maine Coast Book Shop in Damariscotta. Both books are also available at Skidompha Library in Damariscotta.