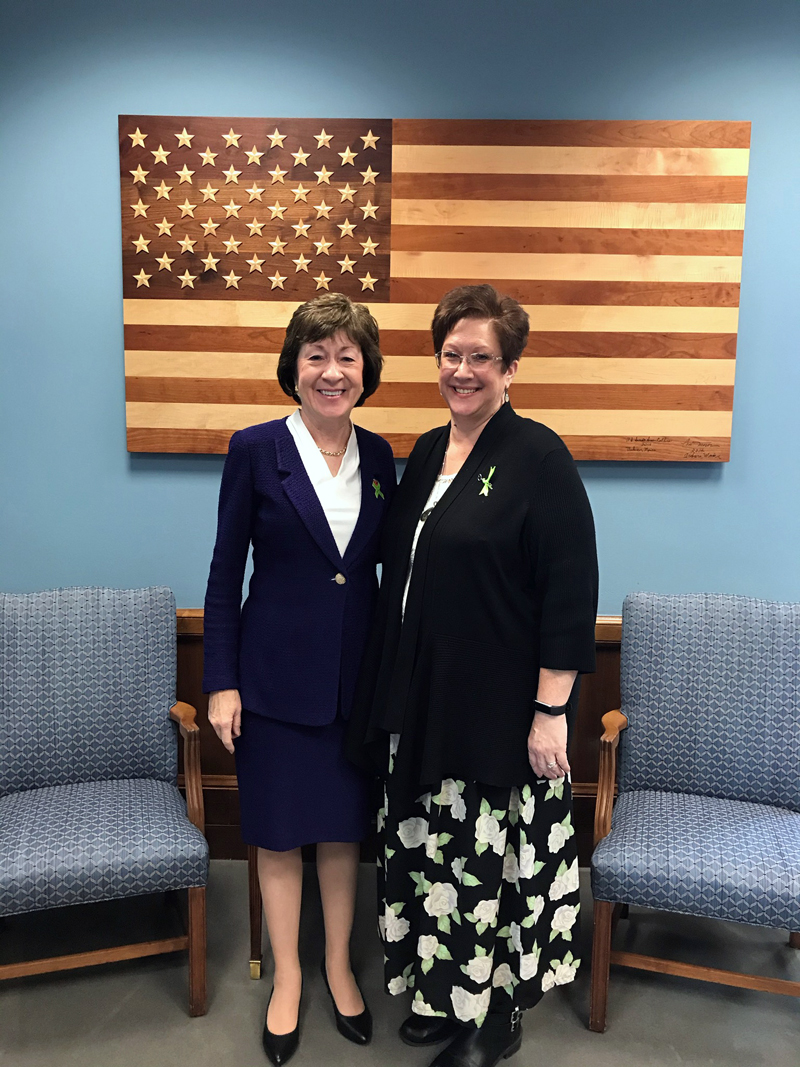 A Nobleboro activist worked with U.S. Sen. Susan Collins, R-Maine, and many others to advocate for federal legislation to combat tick-borne diseases. Congress approved the legislation as part of a budget package Dec. 19 and President Donald Trump signed it Dec. 20.

Over the last several months, Paula Jackson Jones, president and co-founder of Midcoast Lyme Disease Support & Education and author of the “Lyme Time” column in The Lincoln County News, lent her knowledge and personal experience to help draft and advocate for the Kay Hagan Tick Act. The legislation includes about $150 million to combat tick- and vector-borne diseases.

Collins sponsored the legislation with Tina Smith, D-Minn., and over 155 civic and volunteer organizations worked toward its passage.

The Tick Act reauthorizes the Regional Centers of Excellence in Vector-Borne Diseases for five years at $10 million per year and authorizes the Centers for Disease Control and Prevention to award grants of $20 million each year to state health departments.

Collins hailed the bill as a victory for those suffering from tick-borne illnesses.

She and Smith “worked with many advocates when drafting this bipartisan bill, and I am grateful for all those who shared their struggles with these diseases and conveyed the urgent need for this legislation,” Collins said in a press release. “With a national effort the Tick Act will establish, we can slow the spread of this public health threat.”

The bill is named for Kay Hagan, a U.S. senator from North Carolina from 2009-2015 who died of complications from a tick-borne illness, the Powassan virus, in October. The Tick in Tick Act stands for “Ticks: Identify, Control, and Knock out.”

The new law directs federal and state health officials to set up a national strategy to combat tick-borne illnesses, directing millions of dollars to research, prevention, and treatment programs. The CDC will provide grants to state health officials to improve data collection and analysis in an effort to support early detection and diagnosis, improve treatment, and raise awareness about tick-borne illnesses, according to information on congress.gov.

The bill also directs the secretary of health and human services to establish an Office of Oversight and Coordination for Vector-Borne Diseases.

Jones said she first met with Collins’ staff in April. Collins introduced the bill to the Senate in May.

“I’m her constituent and I went on the record and said, ‘This is my story and I am only one of hundreds of thousands with this story and no one wants to do anything about it,’” Jones said.

Jones survived late-stage neurological Lyme disease complicated by four other tick-borne co-infections. She saw 23 medical providers over two years before getting her diagnosis and undergoing four years of treatment.

She said the passage of the Tick Act caps years of efforts to mobilize resources to confront tick-borne illnesses.

“There have been lots of previous attempts over the years by different organizations, but they fizzled out and never got off the ground,” she said.

Jones believes a growing number of tick-borne illnesses over the past couple of years have renewed attention on the issue.

Jones described the Tick Act as an adhesive that will hold different efforts against tick-borne illnesses together.

“This bill was very much needed and a long time coming. Grants were handed out to various organizations in the past, but there was no substantive discussion and no real data sharing. It improves communication. We can really share information now,” Jones said.

Jones attributed the bipartisan support for the legislation to the nondiscriminatory nature of tick-borne illnesses.

“The platform we stood on was, ticks don’t discriminate. It was a completely bipartisan effort. Every time we reached out for co-sponsors or support, more and more important conversations took place,” Jones said.

“We need to work together. We have a problem right now that is vastly and grossly out of control,” Jones said.

The act was co-sponsored by 32 senators from both parties.

Lyme disease, the most common vector-borne disease in the U.S., is caused by bacteria transmitted to humans by infected ticks.

Symptoms include fever, headache, fatigue, and a characteristic skin rash, according to the federal CDC. Left untreated, the infection can spread to the joints, heart, and nervous system.

“Enacting the Tick Act that Sen. Collins introduced will provide a lifeline, not only to patients, but to medical providers,” Jones said. “With funding available for research and education, we can get medical providers on the same page, not only with improved diagnostic tools, but better, more effective treatment options for their patients.”