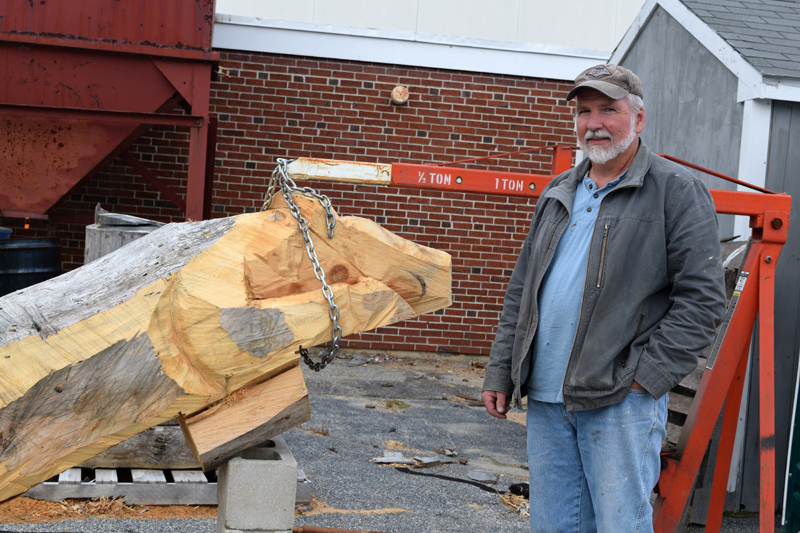 Tony Goulette stands next to a Wolverine sculpture in progress at Wiscasset Middle High School in October. Goulette, a maintenance worker at WMHS, is working with students on the project. (Jessica Clifford photo)

The project has been in the works for the last few school years and is finally coming to fruition.

According to WMHS art teacher Shalimar Chassé, during the 2017-2018 school year, the staff divided into several small groups based on categories of improvements they could make to the building.

Chassé and other staff were part of the beautification team.

“We were charged to walk campus and make notes of those areas needing improvement, ideas for celebrating our community visually, and possible projects we might include in a day of caring or service,” she said.

One of her colleagues suggested that they consider making a sculpture of the school mascot.

The wolverine has been Wiscasset’s mascot since 2011, when the RSU 12 Board of Directors voted to replace the previous mascot, the redskin, as offensive to Native Americans.

Today, there are paintings of wolverines around the school, such as on the back of the baseball dugouts and in the weight room.

This is Goulette’s 29th year working in Wiscasset schools. He said he “does whatever they need me to do,” such as carpentry work, maintenance, and driving a school bus.

At home, Goulette is an artistic woodworker who makes faces and animals out of blown-down or unwanted trees.

The thought was to include students throughout the process of making the sculpture, Chassé said.

The group needed a go-ahead for the project from the administration because the final product would be seen by staff, students, and the public when they come to the school.

WMHS Principal Charles Lomonte said he is excited to see the results.

“We are so fortunate to have the special talents of Tony Goulette on staff,” Lomonte said. “What a wonderful experience for our students to see the pride and the sharing of one’s talent from our staff.” 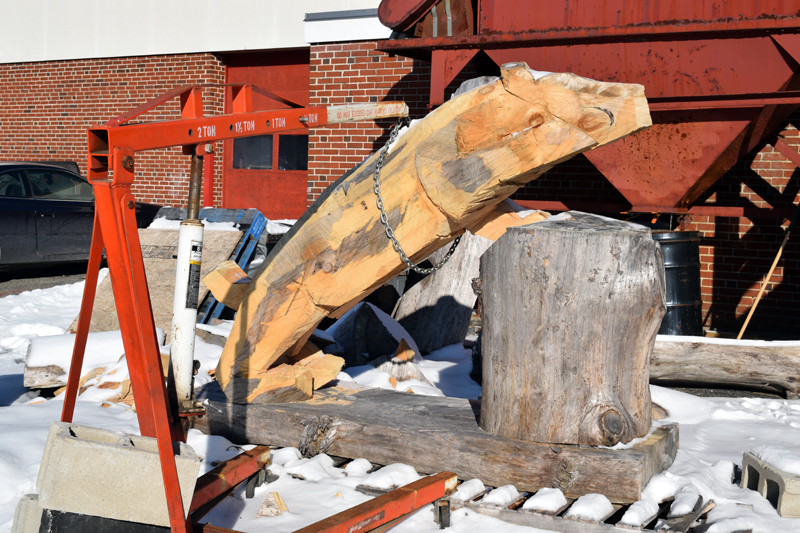 The Wolverine sculpture in progress earlier this month. When complete, it will show a wolverine with one paw on a boulder, as if it is climbing over it. (Jessica Clifford photo)

“This sculpture will make a wonderful addition to our school and will remain a visual testimony of the love that our community shares for our school. I am very excited to see it completed,” Lomonte said.

Chassé shared the project idea with the WMHS Art Club and made some sketches of how they would like the sculpture to look.

Two WMHS Art Club students, Maize Hagerman and Marguerita Fairfield, finalized two sketches to share. One showed a wolverine standing on its hind legs, another a wolverine on all fours.

“Tony visited our group and we discussed design ideas and application to wood and the carving process,” Chassé said.

The final design shows a wolverine with one paw over a boulder to appear as if it is climbing over it.

The next hurdle was finding sections of a tree to use for the project.

The wood for the sculpture ended up coming from Jeff Speed, head custodian at WMHS, who needed a tree to be taken down in his yard.

“I had gone over and done a little bit of tree work for him, some smaller stuff,” Goulette said. “But he was telling me he was going to hire an arborist to come and take this huge tree down and I asked if he would donate it.”

The tree company dropped off two large sections of a tree at WMHS in summer 2018.

Chassé said it was “very fitting for a tree to come from a Wiscasset High alumni and the head caretaker of our school.”

Goulette then went to work, using his own tools, such as a chainsaw and grinders. The sculpture in progress is next to the soccer field.

“Winter came and it got hard to get out there, and then in the summer it was really busy and hot,” Goulette said.

McIntire, Speed, and Goulette have discussed the placement of the final product.

One idea is to put it under the WMHS sign at the front entrance of the building, but a final decision has not been made.

Goulette likes to think that once the sculpture is complete, it will help build school spirit.

“This administration, the superintendent and principal, both are trying to raise that. We’ve kind of lost that over the years when they changed the mascot,” he said, later adding, “But it’s coming around.”