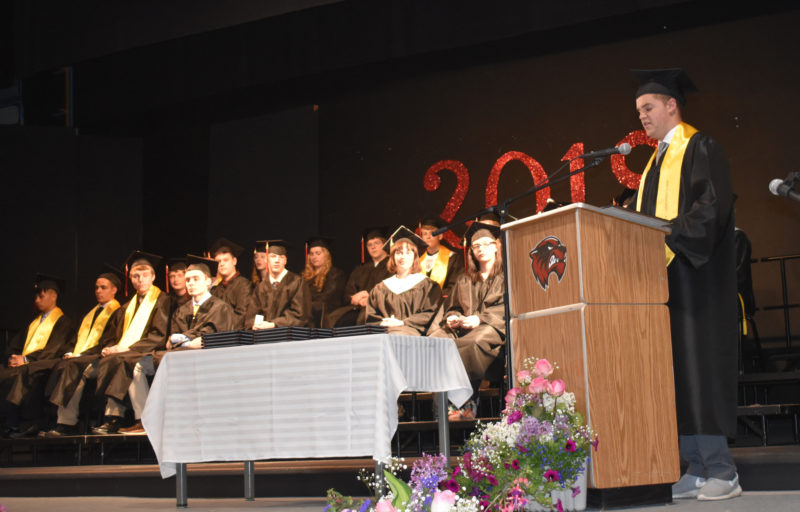 Caleb Gabriele reads his senior essay while the rest of the Wiscasset Middle High School Class of 2019 looks on at graduation on Thursday, June 6. (Alexander Violo photo)

Students at Wiscasset Middle High School celebrated the completion of a chapter in their lives with family and friends during a graduation ceremony the evening of Thursday, June 6.

The ceremony started with opening remarks from students Matthew Chapman and Sydnie Thayer, followed by the reading of a senior essay by Nicholas Drogosek, who talked about coming to Wiscasset as a shy kid struggling with his grades and leaving in a much different situation.

“Now, a message to my fellow graduates that you have made the last two years of my high school experience the best and I wish you all the best in your life after school,” Drogosek said.

Prior to additional speeches, a musical duet was performed. Chapman, president of the student council, and Vanessa Dunn sang “Do I Make You Proud” by Taylor Hicks.

After the musical performance, the evening’s keynote speaker, Principal Charles Lomonte, urged the graduates to be humble.

On the 75th anniversary of D-Day, the Allied landings in Normandy, Lomonte told graduates about his great uncle Bob, who served during World War II in the U.S. Army and returned to Queens, N.Y. to become a barber.

According to Lomonte, his relative amassed a substantial amount of money in his home, unbeknownst to family members, but was never boastful and was instead humble.

Another student speaking at the graduation ceremony was Caleb Gabriele, who remarked on the large size of the audience relative to the number of graduates.

“For 25 kids, there are a lot of people here,” Gabriele said.

Gabriele also read his senior essay, talking about the strengths of his peers in addition to the ups and downs of high school. He said his second family at Wiscasset Middle High School helped get him to where he is today. He also thanked his brother, Joshua Gabriele, for pushing him to be the best person he can be in all aspects of life.

“Over the past couple of years, I personally have had to grow up pretty fast, and it has been rough at times, for not just me but my family too, and if it wasn’t for my second family sitting behind me, I wouldn’t have made it through those times or have turned out to be the young man you see before you. So thank you, teachers and parents, but thank you, class of 2019, for being who you are,” Gabriele said.

The evening concluded with the presentation of diplomas.