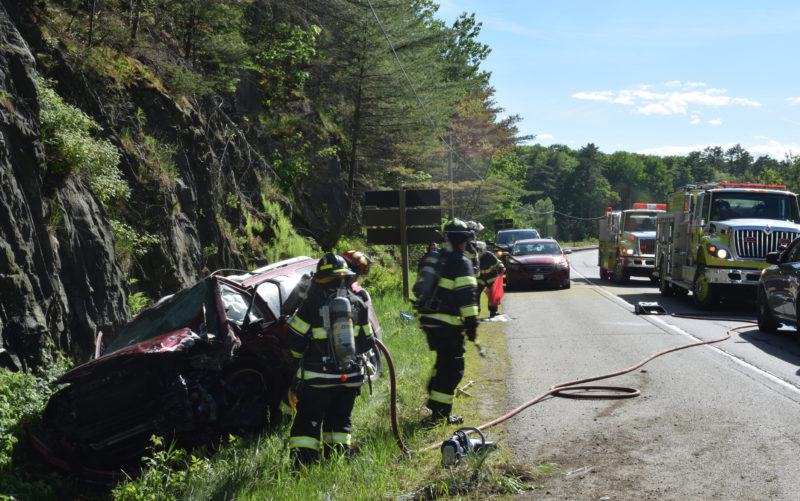 Newcastle firefighters ensure a fire in a red GMC Acadia is extinguished after the vehicle caught fire after leaving Route 1 in Newcastle and hitting a rock ledge on the side of the road on the afternoon of Monday, June 6. A woman was driving the car and was transported to LincolnHealth’s Miles Campus in Damariscotta with what appeared to be non-life-threatening injuries, according to Lincoln County Sheriffs Office Sgt. Matthew Day. (Evan Houk photo)

One woman was transported to LincolnHealth’s Miles Campus in Damariscotta after her car left the roadway and hit a rock ledge on the side of Route 1 in Newcastle on the afternoon of Monday, June 6.

After the crash, Pamela Pitcher, 51, of Jefferson, was removed from the vehicle by bystanders because it was on fire, according to Lincoln County Sheriff’s Office Sgt. Matthew Day.

She was talking at that time, Day said. He does not believe her injuries to be life-threatening. 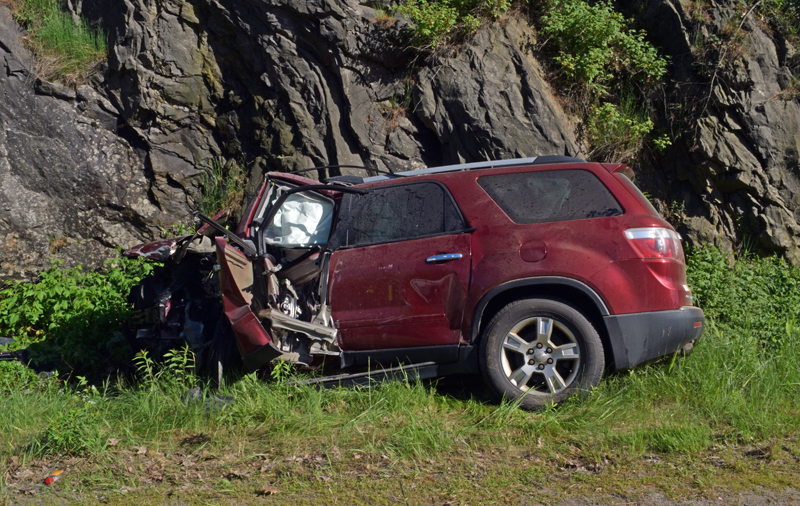 A red GMC Acadia after a crash on Route 1 in Newcastle the afternoon of Monday, June 6. The vehicle was on fire but was extinguished by a witness and bystanders pulled the driver from the vehicle, according to Lincoln County Sheriffs Office Sgt. Matthew Day. (Evan Houk photo)

Pitcher was driving a red GMC Acadia south on Route 1 when she crossed over the opposite lane of traffic, left the roadway, and collided with a large rock ledge on the northbound side of the road, according to witness reports relayed to Day. The impact spun the car around to face north, Day said.

No clear cause for the crash has yet been established and it remains under investigation, LCSO Lt. Brendan Kane said in an email on Tuesday, June 7.

A Newcastle firefighter directs traffic on Route 1 in Newcastle after a red GMC Acadia left the roadway and hit the rock ledge on the side of the road. Route 1 was reduced to one lane of traffic for less than 30 minutes while the scene was cleaned up. (Evan Houk photo)

The Lincoln County Communications Center dispatched first responders at 4:21 p.m. A small area of Route 1 near the intersection with Snead Spur Road was limited to one lane of traffic for less than 30 minutes.