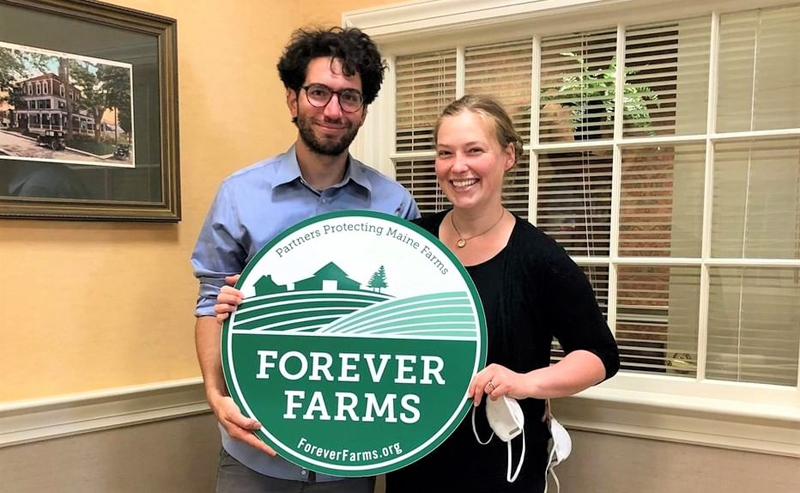 August (left) and Torie DeLisle hold a sign signifying their new hayfield as a “Forever Farm” under Maine Farmland Trust, now that it is protected by an agricultural easement. (Courtesy photo)

With the help of nonprofit organization Maine Farmland Trust, Torie and August DeLisle, of WoodHaus Farm, purchased a 54-acre hayfield on U.S. Route 1 in Nobleboro before it could be developed as housing and lose its agricultural value.

Now, the couple plans to continue operating the field to produce organic hay for the sheep on their farm in Waldoboro, and potentially graze their animals on the property.

“Our biggest concern was that someone was going to buy it and develop it, but we knew we couldn’t buy it on our own,” Torie DeLisle said.

The couple decided to reach out to Maine Farmland Trust, which purchased the 54-acre hayfield and permanently protected it with an agricultural easement, a designation on the property’s deed that ensures it will always remain a “Forever Farm.”

The DeLisles then bought the field from Maine Farmland Trust with the easement on the deed, which allowed the farmers to purchase the land at its “farm use value,” instead of competing with what developers are offering.

The field was put on the market shortly after the DeLisles found out their hay farmer was taking a break, and could not sell them a critical food source for their livestock moving forward. August DeLisle was driving on Route 1 and saw the “for sale” sign in the hayfield.

“We evaluated the property, and found it was at risk of potentially being developed for housing lots and taken out of agriculture,” Amanda Wheeler, farmland protection project manager for Maine Farmland Trust, said. Using the field as organic pastureland for the DeLisles’ pigs and sheep will also translate to healthier livestock, she added.

Housing lots have already been proposed to fields adjacent to the one the DeLisles purchased, a situation that is growing in Midcoast Maine as farmers age and retire. Longstanding family parcels across the country are sold off in pieces when families face financial challenges such as a high medical bill. In 2021, farmland sold for an average of $3,380 per acre according to the U.S. Department of Agriculture. In the Northeast, that price grew to an average of $6,000 per acre.

“We have trouble sourcing hay now,” August DeLisle said, because of the amount of land sold off in recent years along the Midcoast for housing developments.

He grew up in the area, and returned to Damariscotta with Torie to open a restaurant focused on local ingredients, Van Lloyd’s Bistro. The couple worked with farms in the Midcoast to create their menu items, while raising their own chickens for eggs.

They discovered growing the food and raising the meat was a bigger driver for them than the restaurant itself and the service industry, and started raising pigs and sheep. Working with local farmers and creating their own small-scale farm at home stressed for the DeLisles how finite a resource open farmland is, and how quickly it is disappearing from the American landscape.

Sections of farmland, such as the hayfields in Nobleboro, are being cut up and sold to developers. The smaller portions of land then can’t be used for agricultural production because the area is too small to be economically lucrative.

“Once the lots are cut up, no one is putting them back together,” August DeLisle said. As farmland becomes scarcer, the ratio of demand to available land will grow higher, pricing out young families like the DeLisles, who provide fresh, organic food for the community.

In 2017, a survey of over 3,500 aspiring, current, and former farmers from the National Young Farmers Coalition found that securing access to farmland was the most significant challenge facing farmers under 40. The American Farmland Trust found that about 85% of converted farmland in the northeast was lost to the expansion of urban areas and suburbs.

The pandemic that ignited the real estate boom in rural areas as families sought open space and air, however, also drove home the need to “create a community that can feed itself,” Torie DeLisle said. “We need to keep these spaces in agricultural production.”

In her work with Maine Farmland Trust, Wheeler sees a large number of inquiries for assistance purchasing farmland from young people moving into the state who want to use no-till or organic methods of farming.

Communities in Maine, such as Lincoln County, place value on small, family-run businesses and shopping local. The Damariscotta Chamber of Commerce promotes Small Business Saturday at the end of November and the lead up to Christmas, encouraging residents to spend money that goes back into the community.

August DeLisle grew up in a family of small business owners, and understood the power of residents investing in each other. Local farmers offer the same community level of self-sufficiency, especially when national and global supply chains are disrupted. 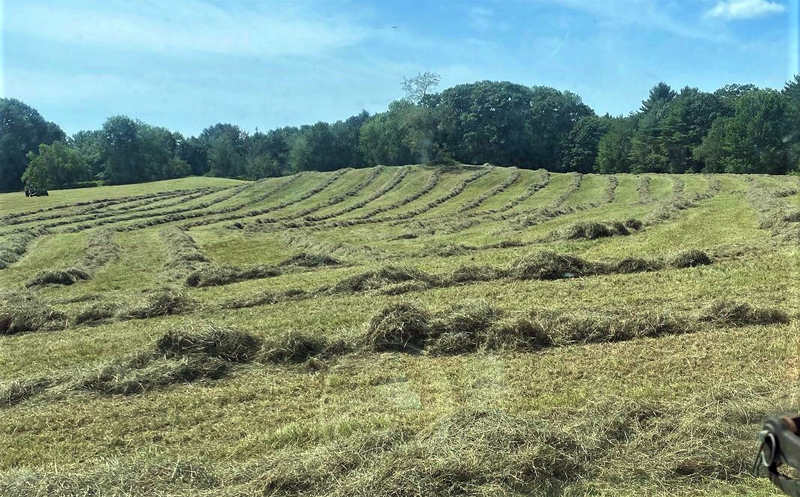 In 2020, the couple was inundated with requests to purchase meat from their sheep and pig farm when meat and poultry processing plants across the country shuttered with outbreaks of the COVID-19 virus.

The resulting meat shortage in grocery stores demonstrated that “something as critical as food and peoples’ ability to feed themselves relies on the whims of the global economy,” even beyond the pandemic, August DeLisle said. A bad harvest of corn or wheat in China will directly impact meat prices in the U.S., as that is what ranchers use to feed their livestock.

“It just shows how fragile the convenience of the global market is,” DeLisle said.

But the DeLisles built up a customer base during the worst of the national lockdown, and continue to sell whole and half sides of pork. They bartered with local farmers and traded their products for fresh vegetables. In the coming months, the DeLisles hope to sell pork skin on their property, too, and plan to work more closely with farmers markets in the future.

“This community is lucky in that way,” Torie DeLisle said, which drove the pair to protect spaces like the hayfield, and operate their own farm in Nobleboro. 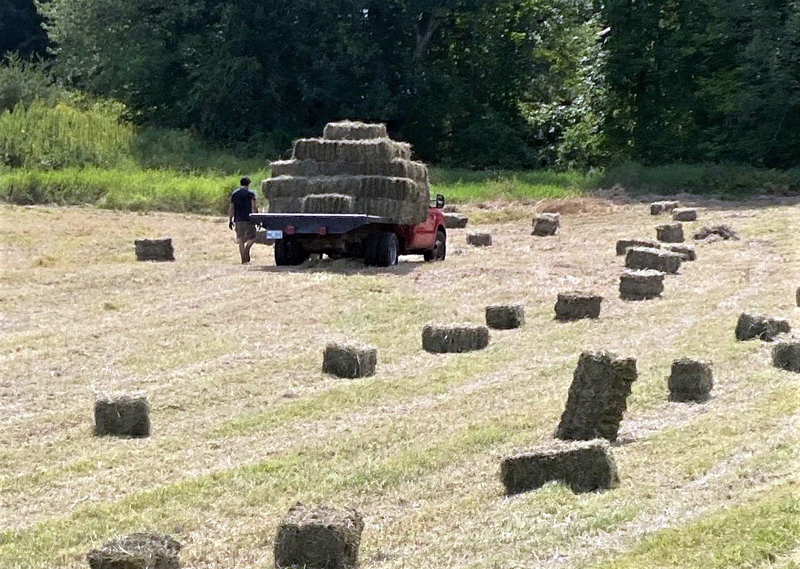 The DeLisles produce organic hay for their pigs and sheep on their new field in Nobleboro. (Courtesy photo)

Maine Farmland Trust helps transition agricultural land into the hands of young farmers to help keep a balance of housing and farming in places like Lincoln County.

At the same time, August DeLisle said, the organization is helping solve the pressing issue of how the U.S. will continue to feed itself.

Maine has more diversified farms than regions of the county like the Midwest, where acres and acres of commercial corn, wheat, or soy dominate. In the northeast, farmers grow a variety of vegetables and raise a number of different animals.

“They are small but mighty farms,” Wheeler said.

Maine Farmland Trust will continue to monitor the land under the agricultural easement in Nobleboro to ensure the conditions of land use for farming and conservation are being adhered to, by whoever owns the property.