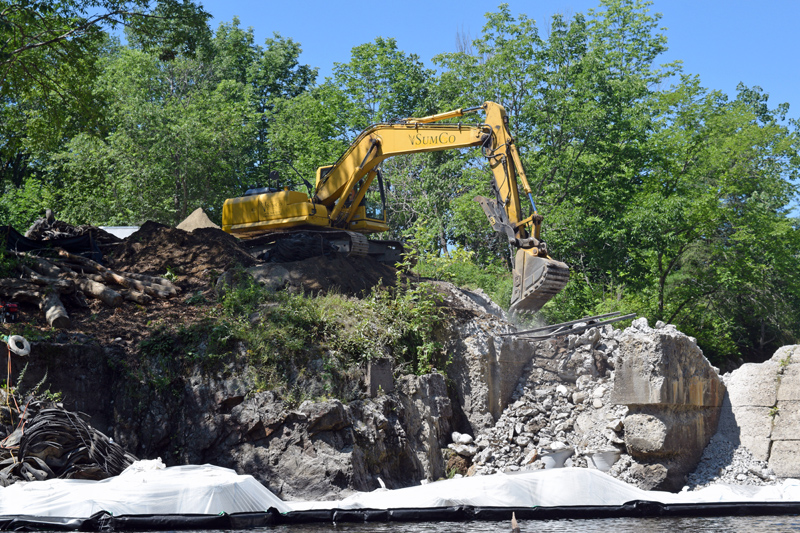 A backhoe begins to demolish the right abutment of the Head Tide Dam in Alna on Thursday, July 25. (Jessica Clifford photo)

Demolition work, part of a project to preserve historical features at the Head Tide Dam in Alna and improve fish passage on the Sheepscot River, began July 24 after preparations started earlier this month.

The project will consist of removal and reconstruction of the west abutment of the dam, the construction of a retaining wall at the foundation of an old mill, and the addition of an overlook and paths to the river.

On July 9, clearing of some trees and stumps began at the site. On July 15, the site was blocked off and construction equipment and materials were brought over.

On July 22 and 23, about 160 sandbags were dropped into the river by crane to isolate the work area, according to Midcoast Conservancy Watershed Restoration Specialist Maranda Nemeth. Biologists from the Maine Department of Marine Resources cleared the area of fish and ensured no Atlantic salmon were present.

Demolition is continuing into the week of Monday, July 29. Concrete will need to be hauled out, Nemeth said.

A foot of ledge will be taken from the river bottom on the west side of the dam. The ledge must be augmented upstream and downstream to direct the flow of water toward this side. 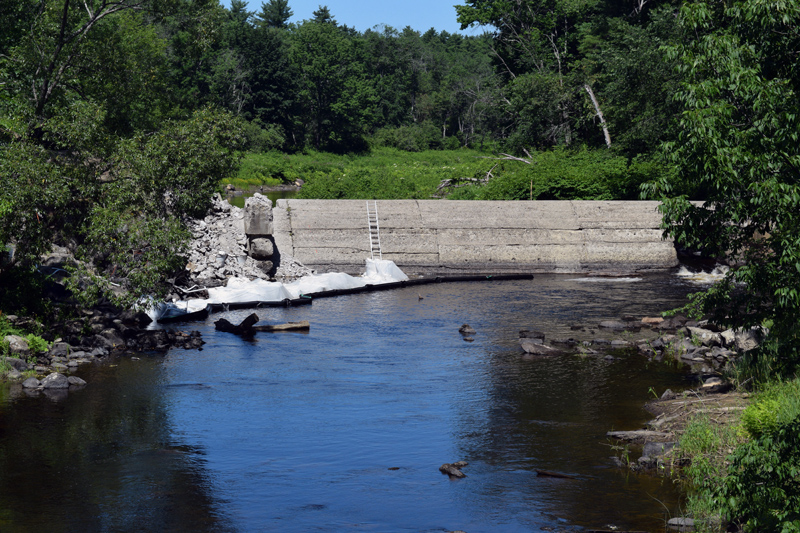 A view from downstream of the entire Head Tide Dam and the construction site. (Jessica Clifford photo)

Another contractor will come in to pour the concrete walls for the new overlook while the retaining wall is built and the trails are created.

A deteriorating two-tier overlook at the dam site will be demolished and replaced with a single-level outlook made of concrete, with a steel grate for the floor and steel beams for the railing. The new overlook will comply with the Americans with Disabilities Act.

The parking lot will be regraded and refinished, with boulders lining the edge to improve parking.

The retaining wall will be built downstream of the western abutment with granite blocks and concrete pillars, to shore up an eroding slope. The wall will be 6 feet high and about 60 feet long, and will taper into the trails and slope.

Although there are existing trails at the dam site, the project will offer safer access to the water by means of a gravel trail. Stones will be used for steps in the steep sections and stone dust laid in between, with handrails to guide people down.

A town committee will help collect information and photos for display on two interpretive signs that will be mounted on metal fencing running along the perimeter of the new overlook. A kiosk will be located to the side of the overlook.

The total construction cost for the project is around $500,100, Nemeth said. However, the cost may change if deviations from the construction plan occur.

During construction, the dam site will be blocked off from swimming for safety reasons.

“I’m very excited for this work to be done, and I’m already very much looking forward to spring migration next year,” Nemeth said. 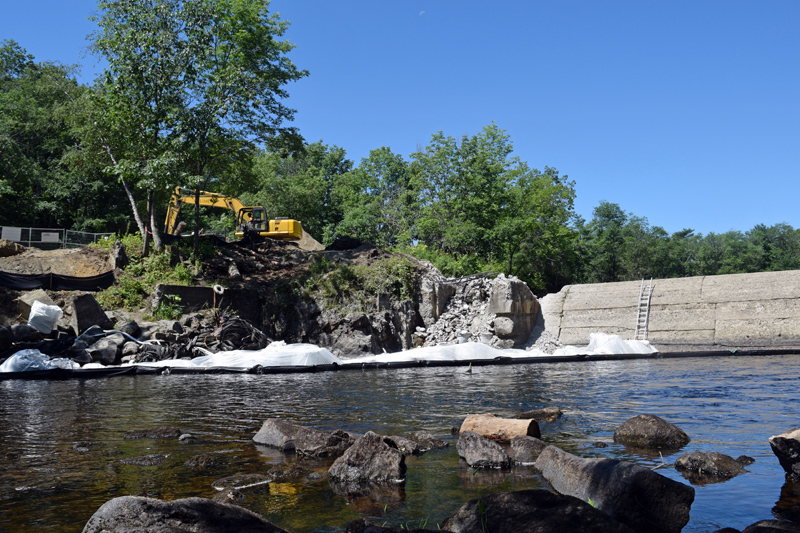 A view of the Head Tide Dam construction site from across the Sheepscot River. (Jessica Clifford photo)

Modification of the dam is the second project in a series of three organized by the Atlantic Salmon Federation, the Midcoast Conservancy, The Nature Conservancy, and the National Marine Fisheries Service. The town of Alna is a partner in the Head Tide Dam project. Nemeth is the project manager for the series.

The goal of all three projects is to improve fish passage in the Sheepscot River, improve public safety and access, and honor the history at the individual sites.

The first of the three projects, completed in 2018, was the removal of the Coopers Mills Dam in Whitefield. The third project, at Branch Pond Mill Dam in China, to stabilize the dam and install a fishway, is planned for 2020.

According to Nemeth, the Head Tide Dam project is different from the others in the series because it is the first dam on the Sheepscot River.

“This is one of the most critical projects because it’s the first barrier that fish or other wildlife would run into before they enter into the rest of the watershed,” Nemeth said. “When we are done with this project, we are opening up over 60 river miles and countless tributaries because we are at the very first dam at the base of the watershed.”

If the organizations only worked on the Coopers Mills Dam, “it would definitely make an impact, but not at the scale that’s meaningful,” she said.

In addition, the project is on a small piece of property in comparison to the Coopers Mills Dam project and it is a high-trafficked area for swimming.

“Coopers Mills was a town property, but it wasn’t a visited property. Folks weren’t hanging out there or exploring,” Nemeth said. “Here, the public is very comfortable with this property and they’re connected to coming swimming here.”

Nemeth said the Head Tide Dam is listed as a unique natural area on The Maine Atlas and Gazetteer. 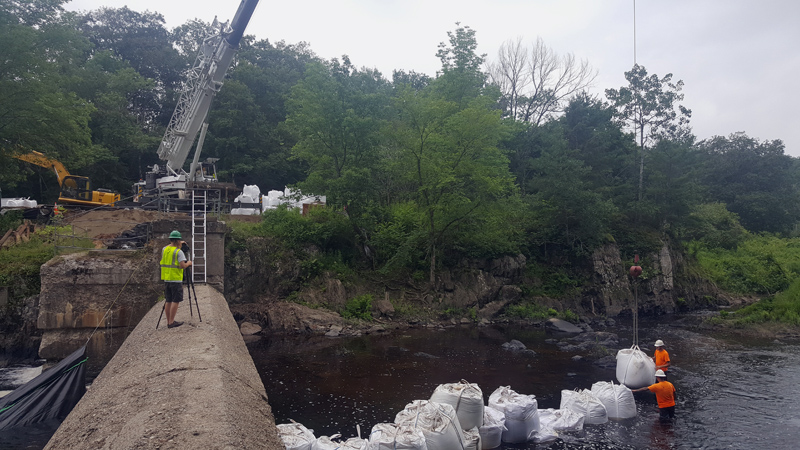 A crane lowers a sandbag into the river to isolate the work area before demolition of the abutment. (Photo courtesy Maranda Nemeth)

At town meeting in 2017, Alna voters overwhelmingly approved entering into a contract with the Atlantic Salmon Federation to modify the dam.

The project will be completed at no cost to the town.

As part of the contract with the Atlantic Salmon Federation, the town asked that local subcontractors be hired.

SumCo Eco-Contracting LLC, of Massachusetts, a civil construction firm focused on ecological and environmental improvement, is the construction contractor. The lead engineer is Mike Burke, of Inter-Fluve Inc., which has an office in Damariscotta.

Regulations limit the time frame for in-stream work to July 15 to Sept. 30.

Nemeth said the contractors are projecting to wrap up construction in October, although this may change. As part of an agreement with the town, the project must be complete by Nov. 15.

Nemeth said she has met with families around the Head Tide Historic District and has not heard any negative comments about the project.

A dedication ceremony will take place after project completion, similar to an event this spring after removal of the Coopers Mills Dam. A date for the event has not been set.

For questions about the project, the town contact is Third Selectman Greg Shute at gshute685@gmail.com and the project contact is Nemeth at maranda@midcoastconservancy.org.