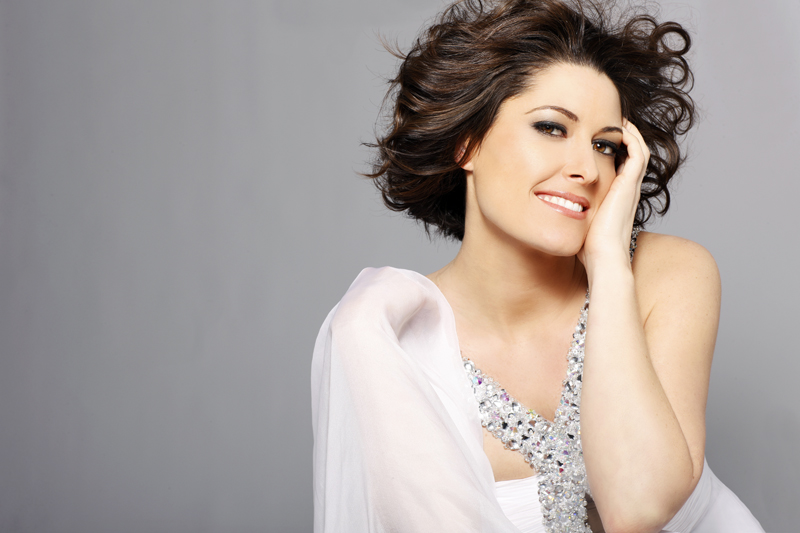 World-renowned mezzo-soprano and Damariscotta native Kate Aldrich insists she does not get mobbed at, say, Renys or Metcalf’s by Lincoln County residents wanting her to sign autographs. But in bigger cities around the world, Aldrich has been pursued after performances by “fangirls – a very colorful type of person, to put it kindly and mildly,” she said in a recent phone interview from the Alna home she shares with her husband and 6-year-old daughter. “In Asia, it’s crazy.”

The highly successful 1992 Lincoln Academy graduate is back on her home turf after recent performances in France, and before that, Los Angeles, where she performed the role of Giulietta in the Los Angeles Opera production of “Tales of Hoffmann” at the invitation of Placido Domingo. She has been gearing up for three Lincoln County performances in early August, two with the DaPonte String Quartet, at venues in East Boothbay and Alna, and one at the Salt Bay Chamberfest in Damariscotta.

The last time Aldrich appeared at a public event in Lincoln County was at Lincoln Theater’s annual meeting on Aug. 11 of last year, when she was the featured guest of the evening, which included a screening of Aldrich singing the aria “Habanera,” from Georges Bizet’s opera “Carmen.” The very engaging, beautiful, and talented Aldrich, it must be said, is indeed “the Carmen of this generation,” as she was described by the San Francisco Sentinel after her San Francisco Opera debut. Later this year, Aldrich will travel to Honolulu to perform “Carmen.”

“I am really looking forward to the Respighi,” she said, speaking the day before her first rehearsal with the DaPonte String Quartet. Aldrich was referring to Ottorino Respighi’s “Il Tramonto,” one of the pieces on the quartet’s “Innerscapes” concert program.

“I prefer it with a string quartet,” said Aldrich of “Il Tramonto.” “I had been looking at it since 2006, but the moment hadn’t come up yet” to perform it, she said. That moment occurred when DaPonte violinist Lydia Forbes, who lives “right down the street” from Aldrich, approached her about performing it with the quartet this summer.

Speaking of both “Il Tramonto” and of Samuel Barber’s “Dover Beach,” which she is also performing with the DaPonte String Quartet, she said “they’re both pieces set to really great poems” (by Percy Bysshe Shelley and Matthew Arnold, respectively). Both poems feature “a melancholy use of nature to recall what’s going on inside the soul in terms of emotional suffering,” Aldrich said, with the sea and sky used as symbols. “It is fitting to do those pieces around here.”

“These are very rich, dense pieces with a lot going on in a short amount of time,” said Aldrich. “I like a piece that has depth yet economizes what it needs to say in the right amount of time. … It is the balance that attracts me to a piece, as opposed to an overly dramatic presentation of a banal piece, or the opposite. Balance and right proportions are what attract me to a piece. But yes, I think you could say I’m attracted to the highly emotional.”

Aldrich will be in her element when she performs four pieces by German composer Richard Strauss at the Aug. 8 opening night of Salt Bay Chamberfest, pieces she described as “emotionally complex, very dramatic, very expressionist.” The set of pieces – “Zueignung,” “Allerseelen,” “Befreit,” and “Morgen” – is “a set that’s been around a while for me,” she said. Aldrich performed the four songs at a May recital presented by Opera Maine at Hannaford Hall in Portland.

Aldrich will also be performing the aria “Riedi al soglio,” from the Gioachino Rossini opera “Zelmira” at her Salt Bay Chamberfest appearance.

“Salt Bay Chamberfest is thrilled to welcome Kate Aldrich … to Darrows Barn for a first-time collaboration with the Chamberfest,” said Salt Bay Chamberfest General Manager Miriam Fogel in a recent email. “While the festival regularly features musicians from all over the country and the world, it is particularly exciting this year to present a Damariscotta native of such fantastic caliber, who brings her experience singing lead roles in the top opera houses throughout the globe to our festival. Being able to present our ever-supportive and enthusiastic audience with a ‘native daughter’ on stage is a true treat.”

For her part, Aldrich understands the fascination with seeing the local girl who made good perform in her hometown. She is just as interested in catching up with her friends from high school. “I’m intrigued when I see what my high school friends are up to,” she said. “I can see why it’s intriguing for people (to see me perform here).”

But Aldrich does admit that she is used to associating Lincoln County with downtime, with being off work. “I associate being here with not performing,” she said, adding, “It’s weird but kind of cool to be working and rehearsing in the area!”

“Some people don’t consider themselves classical music fans,” said Aldrich. “This is a great way to open your eyes to a new world of music, a new repertoire of music. I  challenge people to come out and try this – and these are such cool venues. I think the Alna venue is such fun to go to. And you don’t have to drive to New York or Boston.”

Aldrich will perform with the DaPonte String Quartet at 7 p.m. on Friday, Aug. 4 at the Alna Meetinghouse, 1789 Alna Road, Alna. She will be featured on Samuel Barber’s “Dover Beach” and Ottorino Respighi’s “Il Tramonto.” Tickets are $30 and can be purchased at daponte.org and at Sherman’s Maine Coast Book Shop, 158 Main St., Damariscotta. (The same program was presented at an Aug. 2 concert at Bigelow Laboratory for Ocean Sciences in East Boothbay.)

Aldrich will open the Salt Bay Chamberfest at Darrows Barn at the Damariscotta River Association’s Round Top Farm, at 3 Round Top Lane in Damariscotta, on Tuesday, Aug. 8 with a 7:30 p.m. concert featuring the Richard Strauss pieces “Zueignung,” “Allerseelen,” “Befreit,” and “Morgen,” and Gioachino Rossini’s “Riedi al soglio,” from the opera “Zelmira.” Joining Aldrich on the program, which also includes Gabriel Faure’s Piano Quartet No. 2 in G minor, Op. 45 and Missy Mazzoli’s “Kinski Paganini” for solo violin, will be violinist Jennifer Koh, violist Cynthia Phelps, cellist Wilhelmina Smith, and pianist Thomas Sauer. Tickets are $30 for adults and $5 for students and can be purchased online at saltbaychamberfest.org or by calling 800-838-3006.