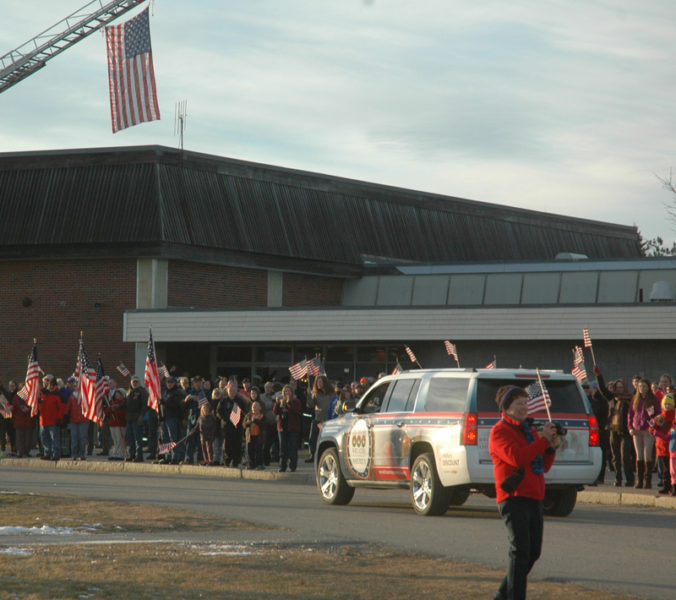 On Sunday, Dec. 11, a large crowd gathered at Medomak Valley High School in Waldoboro to wait for Wreaths Across America to arrive, shortly after the convoy embarked on its annual procession to Arlington National Cemetery.

A line of American flags and the cheering individuals holding them had a warm welcome in store for the 16 tractor-trailers carrying Maine-made Christmas wreaths down the Eastern Seaboard.

Joining the semitrailers were a number of other vehicles, including a bus carrying gold star and blue star families, fire trucks and police cruisers, and the motorcycles of the Patriot Guard Riders.

The ceremony marked Wreaths Across America’s second annual visit to MVHS and, as was the case the first year, a number of local police officers, emergency responders, and volunteers were at the doors of the high school waiting to welcome those in attendance.

Though similar to the event’s debut in Waldoboro, this year’s event differed slightly from last year’s ceremony.

According to MVHS educator Neil Lash, this year’s ceremony was moved from the school’s auditorium to the gymnasium to accommodate the large crowd anticipated to attend.

Additionally, two veterans of every war dating back to World War II received wreaths during this year’s wreath presentation ceremony. 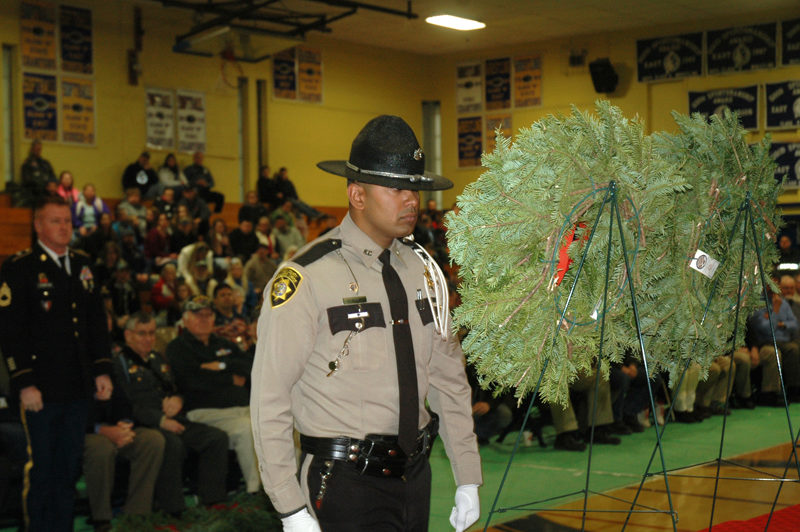 Prior to the convoy’s arrival, the auditorium was open to the public as students solemnly read 1,887 names of Maine veterans who were killed in battle during World War I, World War II, the Korean War, and the Vietnam War.

“We’re doing that so those people aren’t forgotten,” Lash said.

The founder of Wreaths Across America, Morrill Worcester, and his wife, Karen Worcester, were in attendance.

At the outset of the event, Morrill Worcester was presented with an MVHS hat, which he quickly donned to the loud approval of the assembled crowd.

His wife then spoke, thanking those who had come out to support the annual tribute and indicating her appreciation of the warm reception.

“The biggest thing we do is to teach. We appreciate being here, and over the years I can name five schools where instead of us teaching them something, they taught us something,” Worcester said.

During the wreath presentation ceremony that followed, several veterans received wreaths representing their fellow servicemen who had served in the nation’s conflicts from the present day back to WWII. 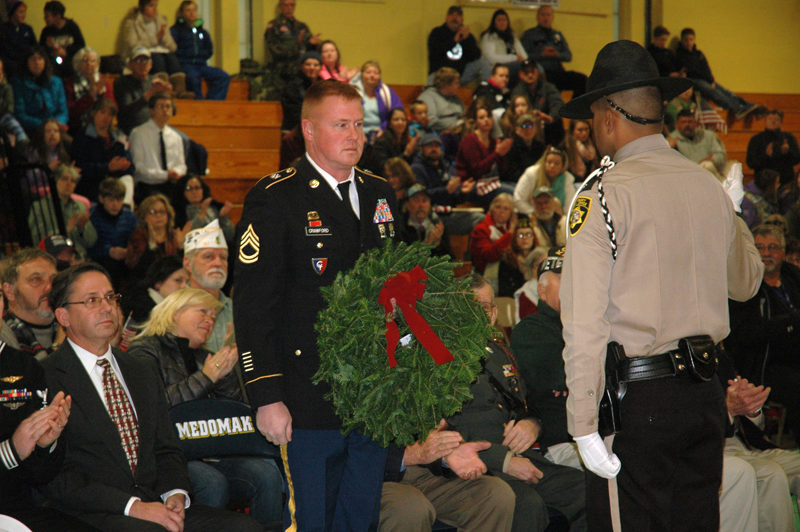 An additional wreath was presented by John Blodgett, of Waldoboro, to remember the nation’s prisoners of war and those missing in action, and a POW/MIA flag was carried alongside the wreath by Bruce Poland, of Bremen, as taps was played.

Town officials from each community in RSU 40 were in attendance and received wreaths to be placed on each municipality’s veterans memorial.

A wreath was also presented to MVHS Principal Andrew Cavanaugh and RSU 40 Superintendent Steve Nolan to be displayed at the high school.

Wreaths Across America is a registered 501(c)(3) nonprofit formed in 2007, but the organization traces its routes back to a 1992 tribute organized by Morrill Worcester, owner of Worcester Wreath Co. in the Washington County town of Harrington.

There are presently 700 participating locations in all 50 states and 24 national cemeteries on foreign soil. 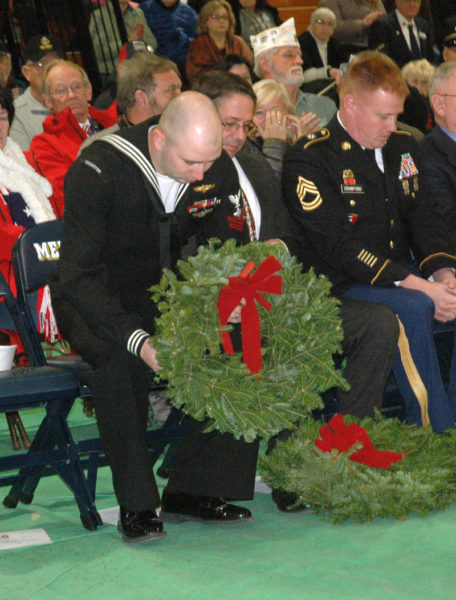 The mission of the organization is to remember, honor, and teach.

The journey from Maine to Virginia kicked off with a sunrise service with gold star families – the families of service members killed in war – on Saturday, Dec. 10 at Quoddy Head State Park in Lubec.

The first day of the journey, which will culminate Saturday, Dec. 17, also included a HART ceremony.

The Honoring Allies and Remembering Together ceremony takes place on the international bridge between Calais, Maine and St. Stephen, New Brunswick, featuring families of veterans from both sides of the border.

This year’s grand marshal, Candy Martin, of San Antonio, Texas, a gold star mother and 38-year veteran of the U.S. Army, was taking part in Wreaths Across America for the third time.

She said the journey offers a great opportunity for families of service members to come together and honor those who have fallen.

“I’m hoping it will make people think twice and keep those who have fallen in our hearts,” Martin said.

Those interested in following the convoy as it moves toward its destination can do so via a dashboard cam at oakhurstdairy.com.