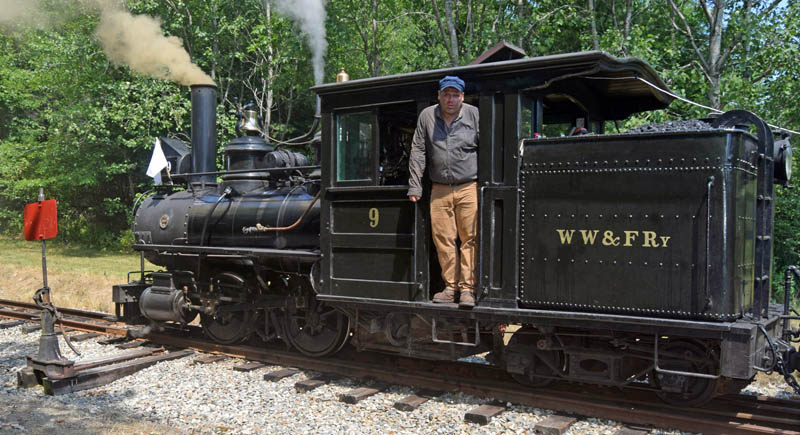 Bryce Weeks stands in the doorway of Locomotive 9 at the Alna station on Saturday, Aug. 6. Weeks served as the locomotive’s fireman, a responsibility that requires shoveling coal into the boilers firebox. Weeks was part of the grand opening for the Wiscasset, Waterville & Farmington Railway’s Mountain Extension. (Alec Welsh photo)

The Wiscasset, Waterville, and Farmington Railway Museum held the grand opening of their Mountain Extension railway on Saturday, Aug. 6 in Alna.

The opening signified the end of five years of labor, organizing, and fundraising, by more than 200 volunteers, and a dozen contractors. Jason Lamontagne, one of the train conductors for the grand opening also helped organize and manage the project.

“There were so many people that gave their free time to make this happen,” Lamontagne said. “We had some contractors to make sure it was done right, but our volunteers made this happen.”

The event started at the museum’s location in Alna also known as Sheepscot Station. From there, approximately 100 passengers boarded the double-headed steam train for a ride across Sheepscot Valley.

Locomotive 9 was lead engine on the train. It is an 18-ton Forney Style engine, built in 1891. Following the lead engine, at nearly twice the weight, was Locomotive 7. The 33-ton Baldwin Locomotive Works, modified Forney Style was built in 1913 and was provided for this event by the Maine Narrow Gauge Railroad Co. and Museum.

The train departed Sheepscot Station at 1:15 p.m. and traveled north for approximately 10 minutes to Alna Center Station. At the station passengers deboarded the train and cooled off under a newly built pavilion with ice tea, cold water, lemonade, and cake.

Leaders of the project gave speeches thanking the volunteers and project coordinators. Organizations that contributed to the project were also recognized. At the conclusion of the speeches, passengers, and event coordinators posed for a picture in front of the train.

From Alna Center Station the train continued north to Top of Mountain, approximately 2.6 miles from Sheepscot Station and the starting point for the mountain extension.

“We started the extension from Top of Mountain in 2017,” Lamontagne said during a phone interview. “The railway from Sheepscot Station to Top of Mountain was completed in 2015.”

At Top of Mountain the train stopped before a red flag along the railway that signified the railway was under construction. Passengers deboarded the train to watch Lamontagne remove the flag officially putting the railway in service.

From Top of Mountain the train began a slight decent north towards Trout Brook Bridge ending at Trout Brook Station next to Route 218. Passengers once again deboarded the train, this time to watch event organizers rotate Locomotives 9 and 7 on a railway turntable so the train could return to Sheepscot Station.

It took crews approximately 20 minutes to rotate both engines. Once the engines were rotated the train began its return south to Sheepscot Station to conclude the event.

The labor conducted to complete the mountain extension fell on two separate weekends, one in 2018 and one in 2019, according to Lamontagne.

“We had over 100 volunteers over those weekends help cut down trees, dig ditches and culverts,” Lamontagne said. “Those weekends are when most of the work for the extension was completed.”

According to Lamontagne the biggest challenge in the project was constructing and setting the 90-foot Trout Brook Bridge. Donated by the National Society for the Preservation of Cover Bridges in 2017, the bridge was reconstructed and towed up Route 218 before being placed over Trout Brook on Sept. 8, 2018.

“Part of the challenge was that it was an environmentally friendly area meaning we had a lot of regulations we had to follow while setting the bridge,” Lamontagne said.

Crews were able to successfully set the bridge without having any hazardous construction materials spill into the brook below.

“We raised well over $100,000 during two or three fund raisers from members of the museum to help pay for the project,” Lamontagne said. “We also had contributions of various forms from organizations and private foundations.”

WW&F Museum has over 1,300 members around the world. They are a non-profit organization that is dedicated to the display and preservation of the two-foot gauge Wiscasset, Waterville and Farmington Railway.

Train rides on the Mountain Extension are now open to the public starting Saturday, Aug. 13. Tickets can be purchased on WW&F website: wwfry.org.