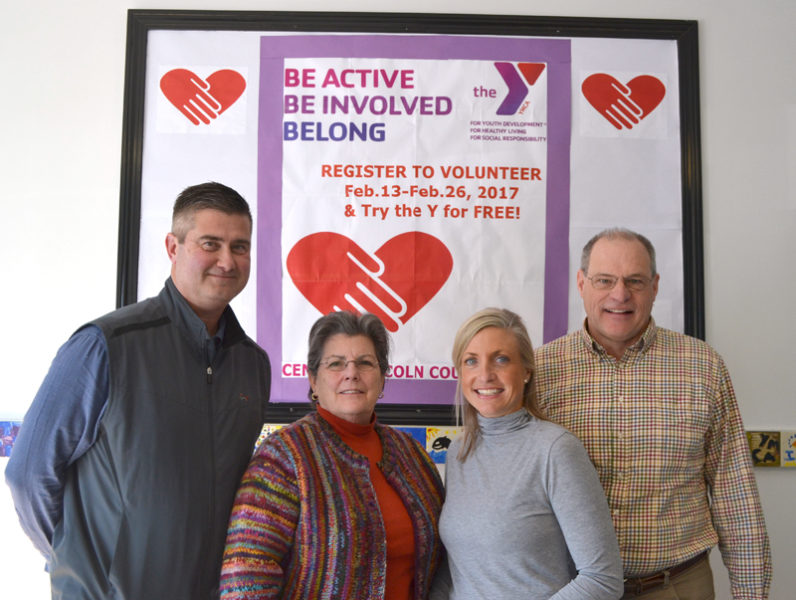 In an effort to help the town of Damariscotta remedy inadvertent violations of grant agreements from the 1980s, the Central Lincoln County YMCA plans to give land to the town. From left: YMCA Board of Directors Chair Dennis Anderson, Damariscotta Board of Selectmen Chair Robin Mayer, CLC YMCA CEO Meagan Hamblett, and Damariscotta Town Manager Matt Lutkus at the CLC YMCA on Friday, Feb. 17. (Maia Zewert photo)

The Central Lincoln County YMCA plans to give land near the Y to Damariscotta to help the town remedy inadvertent violations of grant agreements from the 1980s.

In 1981, 1983, and 1986, the town accepted a total of almost $40,000 in federal grant funds from the Land and Water Conservation Fund for construction and improvements to the ballfield, lighting, and playground near the Central Lincoln County Recreation Center, the predecessor of the YMCA. The project site was an estimated 6 acres, which included the site of the recreation center.

As part of the grant agreements, the town was required to retain ownership of the land in perpetuity. In 1989, Damariscotta voters agreed to lease the land to the YMCA, and voters approved a transfer of the property to the YMCA in 2006. Both the lease agreement and the transfer were in conflict with the town’s acceptance of the grants.

Since the conflict was discovered in November 2016 by Doug Beck, an outdoor recreation supervisor with the Maine Bureau of Parks and Lands, which administers the Land and Water Conservation Fund at the state level, the town has been looking for a way to provide a substitute for the land it transferred to the YMCA, a process known as conversion. In order to qualify for conversion, the land must be used for an outdoor park or recreation project and cannot be owned by a private organization or nonprofit.

The improvement projects planned for Damariscotta’s downtown, including the construction of public restrooms in the municipal parking lot, the addition of green space, and a pedestrian walkway at Taco Alley, were in consideration for use in the conversion process.

After he was contacted by Beck, Lutkus sent an email to CLC YMCA CEO Meagan Hamblett to inform her of the situation.

“The Y was not at fault at any way for this, but I just wanted them to be aware of what was going on,” Lutkus said.

Lutkus informed the Damariscotta Board of Selectmen about the situation during its meeting in December 2016. The next week, he received a call from Dennis Anderson, the chairman of the YMCA board, about the possibility of the Y donating land to the town to help resolve the issue.

“The Y exists to give back to the community,” Anderson said. “We have enjoyed a wonderful relationship with the town, and it’s only right to consider every opportunity to help out where we can.”

The CLC YMCA owns a 41-acre parcel adjacent to the main YMCA parcel. The land, which was originally given to the Central Lincoln County Recreation Center, includes a 1.5-mile trail that connects with a trail near Great Salt Bay Community School. The property is also used for the YMCA’s annual Zombie Run, a 5K race held on the weekend of the Damariscotta Pumpkinfest.

Once the appraisals are complete and the acreage and location of the parcel to be transferred is identified, the project would need to be accepted by the National Park Service, which administers the Land and Water Conservation Fund at the federal level.

Finally, the YMCA board will need to vote to transfer the property to the town.

Aside from more advertising about the trail and a link to the GSB trail, the town would likely not have to invest any additional time or funds into the property’s upkeep, Lutkus said.

Lutkus estimated the process could take up to a year, but if the town starts working in earnest to complete the conversion process, Damariscotta will be eligible to apply for federal and state grants from the Land and Water Conservation Fund and the Recreational Trails Program.

Lutkus announced the Y’s contribution to the selectmen during their Wednesday, Feb. 15 meeting. Robin Mayer, the board’s chairman, said she is “thrilled” by the Y’s generosity.

“We’ve been looking for a way to remedy this for a while, and for the Y to step up and offer this is really just amazing,” Mayer said.