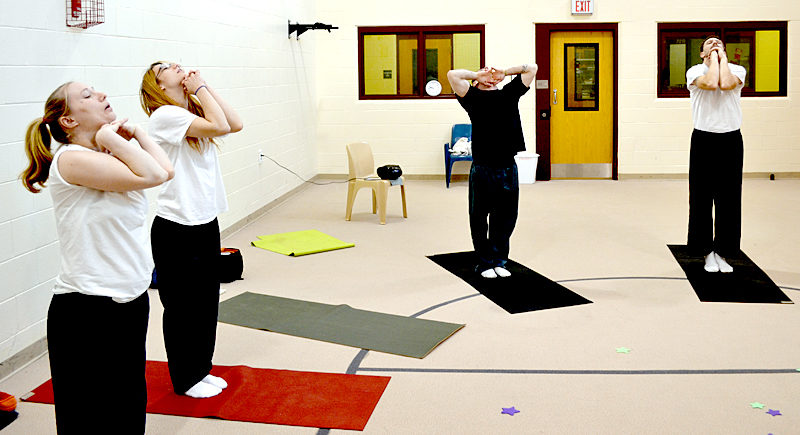 Ignore what is outside the room, focus on your mind and your heart, breathe – these were the words retired nurse and certified yoga instructor Joan Taylor said to six inmates at Two Bridges Regional Jail in Wiscasset who gathered for a yoga class Thursday, July 14.

For some, the class was their first experience with yoga. For others, the weekly yoga class has become an established part of their routine at Two Bridges.

For the past 10 years, Taylor, a volunteer who lives in Edgecomb, has led a weekly yoga and meditation class at Two Bridges. A believer in the rehabilitative capabilities of yoga and meditation, Taylor said she is committed to providing inmates with tools that, when used, can change their lives.

“The biggest tool is a deep breath,” Taylor said.

The path that led Taylor to Two Bridges was a serendipitous one. Before beginning the program for inmates, Taylor was focused on working with veterans. She had completed a Warriors At Ease course, which trains yoga and meditation teachers to work with veterans.

However, Taylor was unable to connect with any veteran organizations in the area to offer a free yoga course. One day, Taylor crossed paths with the jail’s program coordinator at the time, Ellie Grover.

Taylor said she asked Grover if she knew of any organizations that had an interest in starting yoga classes. According to Taylor, Grover told her that an inmate at Two Bridges had just asked about yoga and requested some magazines on the exercise.

Since then, Taylor has been a steady presence at Two Bridges. Every Thursday, she walks inmates through the fundamentals of the spiritual, mental, and physical practice that is yoga. She talks about the interaction of the breath with the body, something inmates experience themselves when they move into and out of yoga poses.

Taylor talks about using the mind to control the impulses of the body and using deep breaths to overcome moments of anxiety, such as waiting in line in the dining hall, or hearing one of the doors at the jail close. For 90 minutes, Taylor teaches inmates a variety of yoga poses.

Several poses, such as the eagle pose and the dancer pose, focus on balance, both physical and emotional. “The reason you’re in here is because your life is unbalanced,” Taylor said to the class Thursday. “I want you to live outside, freely, comfortably, and securely.”

Following yoga, participants lie on their backs with a towel over their eyes and sink into a deep meditation.

Some of the class participants have been charged with felonies and could face lengthy prison sentences. Others will soon be released. All of the participants said the class is beneficial.

Taylor’s yoga class is now a part of Ben Foster’s routine at Two Bridges. “It gives me a little bit of peace and some relief from the chaos,” Foster said. The yoga also helps relieve his lower back pain, he said.

Mary Catherine Wilson said she has always struggled with impulse control, but the yoga and meditation has helped. “It helps me calm down and I feel really good for the rest of the day,” Wilson said.

Felichia Glidden was introduced to yoga at Two Bridges. “I don’t know that much about yoga, but it’s nice and relaxing. It helps with being in jail,” Glidden said. 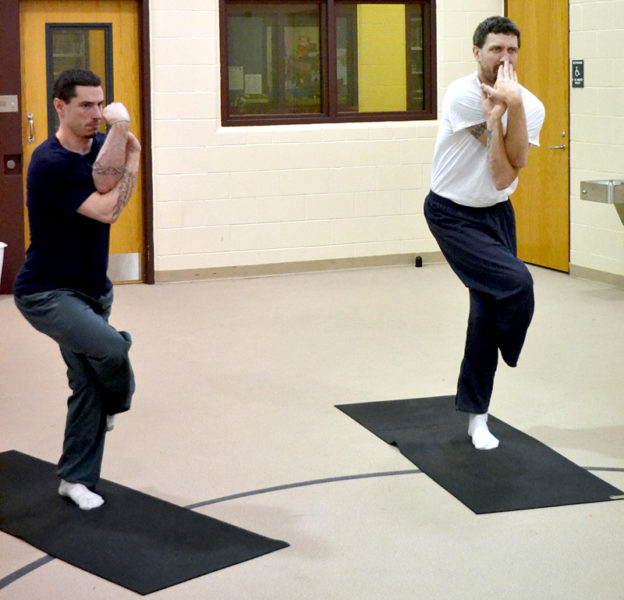 The July 14 class was Jason DuRoss’ first yoga class. “It was eye-opening,” he said. “There aren’t a lot of programs in here. This really helps. It’s really positive.” DuRoss said he plans to continue to practice yoga, but “hopefully not in a facility.”

With budget cuts having eliminated or reduced the availability of programs at Two Bridges, volunteers like Taylor are not only bringing innovative programming into the jail, they are also keeping programs going. Over the years, at least a couple thousand inmates have attended one of Taylor’s classes.

Taylor hopes more yoga and meditation classes will be instituted in Maine’s county jail and prison system, and everyone will have access to tools that can change their lives. There is no such thing as perfection in yoga, Taylor said to the class.