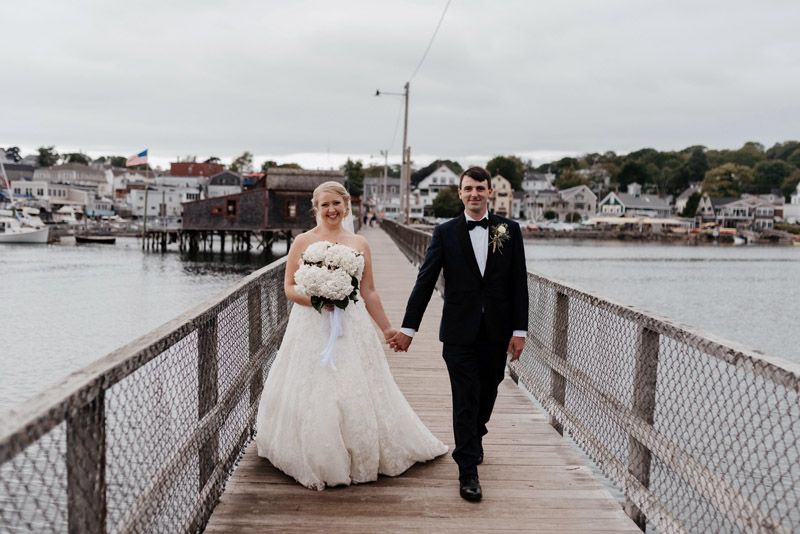 Emily Sarah Christine Rittershaus, Ph.D., and Richard Benjamin Haggett were married Aug. 18 at 3 o’clock in the afternoon on the harborside lawn of the bride’s grandparents, Chester and Alice Fossett, at 1 Atlantic Ave. in Boothbay Harbor. Lisa Smith, of All in One Weddings, officiated.

The bride is the daughter of Charles and Elaine Fossett Rittershaus, of Sprucewold, Boothbay Harbor, and Malden, Mass.

The groom is the son of Charles “Chip” and Martha Barter Haggett, of West Boothbay Harbor.

An acoustic set for the ceremony was performed by the bride’s uncle and cousins, Brian, Ethan, and Alison Rittershaus, of Barters Island, Trevett.

Isaac Poore, of Bath, was the best man. Groomsmen were Malcolm Browne, of Boothbay, and Michael Girard, of Shrewsbury, Mass. They wore royal blue suits with matching ties, and boutonnieres of white nigella, silver eucalyptus, and rosemary from Mindful Gardens, Bowdoinham.

The bride wore a strapless ivory silk wedding gown with fil coupe skirt, sprinkled with petite flowers fashioned of silk, and a chapel train by Anne Barge, from the Kleinfeld Bridal Boutique. Her chapel veil was an ivory silk tulle. She wore Badgley Mischka jeweled ivory silk heels and carried a bouquet of white hydrangeas, Israeli ruscus, and pink solomio.

The newlyweds were chauffeured from the ceremony to the reception in the historic Thomas Edison family 1941 Cadillac limousine from Boothbay Railway Village.

The reception was held at Hodgdon Yacht Services on Southport Island and was catered by Stone Cove Catering, of Bristol. The wedding cake was three tiers of French vanilla cake layered with homemade raspberry preserves and whipped Italian buttercream frosting made by The Sugar Tree, of Tenants Harbor. Whoopie pie cakes were made by Wicked Whoopies and saltwater taffy favors were provided by Downeast Candies, where the bride and groom met as employees 14 years ago.

DJ Haley Mittra, from Double Platinum Celebrations, kept everyone dancing all night; the couple’s first dance was “I Only Have Eyes for You,” performed by The Flamingos. The Oh Snap Maine photo booth contributed to the party atmosphere and Cody James Barry Photography and Mitchell Cine beautifully documented the day’s festivities. The seating for the seaside ceremony was provided by Hawkes Rentals, of Boothbay Harbor.

The rehearsal dinner was held on Aug. 17 at the Chowder House in Boothbay Harbor and catered by Atlantic Edge of Boothbay Harbor and the East Boothbay General Store. A round of toasts were given by the bride’s family and much merriment followed catching up with friends and family from across the country.

The happy couple will celebrate their honeymoon in Hawaii.