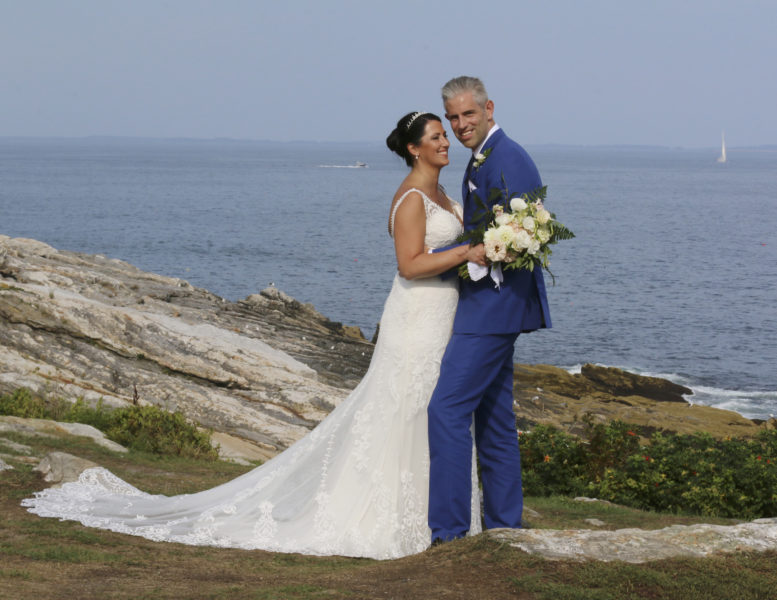 The guests were welcomed on the Thursday evening prior to the wedding to a party featuring local delights. A lobster bake catered by Merritt Wotton was held at Long Cove Point Association on Friday evening, after the rehearsal.

The bouquet flowers and arrangements were designed by Blue Cloud Farm.

The bride was dressed in a Kenneth Winston gown, and she and her bridal party arrived in a trolley.

The groom wore a custom suit tailored by Wingtip, of San Francisco.

The reception was held at The 1812 Farm in Bristol, where the delicious food was catered by Stone Cove Catering, and the Time Pilots band kept everyone dancing all evening. A special treat of Allagash was on tap to add to the enjoyment of the guests, and Three Dogs Cafe baked a spectacular three-tiered lemon cake.

Maine is a special place for the couple. McDonough has spent every summer in Chamberlain, and was happy to introduce Ellwanger to her family last summer.

The majority of the wedding guests stayed at Long Cove.

The mother of the bride, the bride, and the bridesmaids stayed at the family log cabin.

The newly married couple would like to thank everyone who added to the joyous occasion, especially those who traveled from 11 states, Germany, Italy, and England.

The couple lovingly remembered both the bride’s and the groom’s grandparents, who will always be in their hearts.

The couple is enjoying a mini honeymoon along the Maine coast before returning to their home in San Francisco.