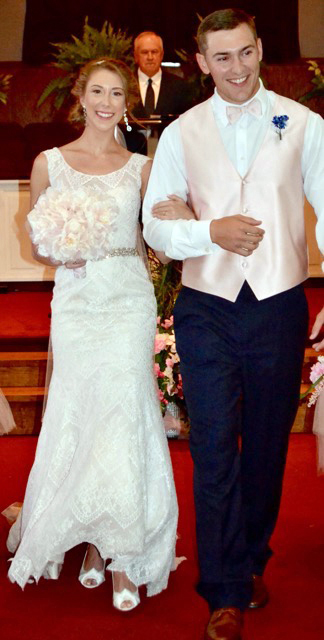 On June 2, Laura Catherine Otterbein was married to Justin Todd Lovell in Clarendon, Ark. at 5 p.m. at the First Baptist Church of Clarendon.

The bride’s parents, John and Ann Hart Otterbein, were in attendance as well as the bride’s grandmother, Bridget Hart (Claude) McElroy, and her sons, Charles R. Hart and James C. Hart, with their wives, Elizabeth and Rhonda.

Special friends of the bride were Zach and Kassidy Gilbert, of Damariscotta; Mr. and Mrs. Patrick Gallagher, of Clearwater, Fla.; and the aunt of the bride, Mrs. Michael Thomas, of Port St. Lucie, Fla. and her son, Bobby Thomas, of Phoenix.

The groom’s parents, Mr. and Mrs. Todd Lovell of Batesville, Ark., attended with a host of family and friends. The reception was held directly after the wedding.

The couple will reside in Clarendon where Justin Lovell is the high school football, basketball, and baseball coach and Laura (Otterbein) Lovell will be the 2018-2019 school counselor at the elementary school. They honeymooned on a week-long cruise to Alaska, with a brief stay in Seattle.