Happenings
This week a true story, art, comedy, and music come together at Lincoln Theater for a celebration of summer entertainment.
‘The Man Who Knew Infinity’ (PG-13; 1 hour, 48 minutes)
“The Man Who Knew Infinity” is the true story of friendship that forever changed mathematics. In 1913, Srinivasa Ramanujan (Dev Patel), a self-taught Indian mathematics genius, traveled to Trinity College, Cambridge, where, over the course of five years, he forged a bond with his mentor, the brilliant and eccentric professor, G.H. Hardy (Jeremy Irons), and fought against prejudice to reveal his mathematic genius to the world. Final showing: 3 p.m., Thursday, June 23.
‘One Man, Two Guvnors’
For a limited time only, National Theatre Live’s Encore Series brings a selection of award-winning British theatre productions to the local cinema. Featuring a Tony Award-winning performance from host of the “The Late Late Show,” James Corden, the uproarious “One Man, Two Guvnors” was a runaway hit both in London’s West End and on Broadway. Playing at 7 p.m., Thursday, June 23. Tickets are available at the door starting at 6 p.m. 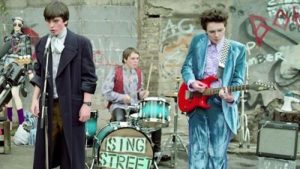 A scene from “Sing Street.”

‘Sing Street’ (PG-13; 1 hour 46 minutes)From director John Carney (“Once,” “Begin Again”), “Sing Street” takes us back to 1980s Dublin seen through the eyes of a 14-year-old boy named Conor (Ferdia Walsh-Peelo), who is looking for a break from a home strained by his parents’ relationship and money troubles, while trying to adjust to his new inner-city public school where the kids are rough and the teachers are rougher. He finds a glimmer of hope in the mysterious, über-cool, and beautiful Raphina (Lucy Boynton), and with the aim of winning her heart he invites her to star in his band’s music videos. There’s only one problem: he’s not part of a band … yet. She agrees, and Conor must deliver what he’s promised, calling himself “Cosmo.” Immersing himself in the vibrant rock-music trends of the decade, he forms a band with a few lads, and the group members pour their hearts into writing lyrics and shooting videos. Inspired by Carney’s life and love for music, “Sing Street” shows us a world where music has the power to take us away from the turmoil of everyday life and transform us into something greater. Playing at 3 p.m. and 7 p.m., Friday-Thursday, June 24-30.

Films on the way
Susan Sarandon in “The Meddler” (PG-13) opens Friday, July 1.

Finally
For more information, go to lcct.org, call the box office at 563-3424, drop by at 2 Theater St. between 11 a.m. and 2 p.m. Tuesday through Friday, or email info@atthelincoln.org. Like Lincoln Theater on Facebook.