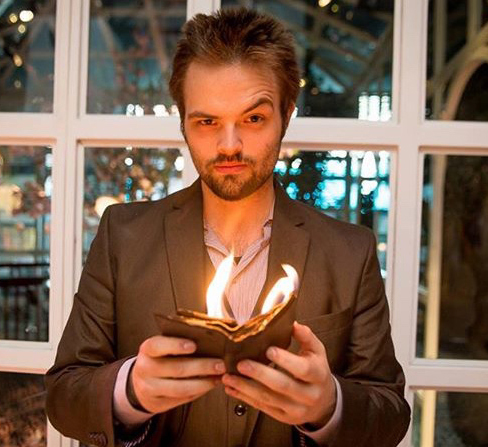 Maine native Kent Axells talents as a mind reader, magician, and illusionist dazzle audiences worldwide. He returns for a special engagement at 7 p.m., Saturday, Oct. 8 at the Lincoln Theater in downtown Damariscotta.

Maine native Kent Axell will bring his magical, mystical, and marvelous show to the Lincoln Theater in downtown Damariscotta at 7 p.m., Saturday, Oct. 8.

Axell, born and raised in Manchester, graduated from Maranacook Community School and then the American Musical and Dramatic Academy in New York City. The New York- and Los Angeles-based Axell has earned a reputation as one of the finest mentalists and magicians in the country, receiving unanimous reviews for being an incredible magician and performer specializing in “knowing things he can’t possibly know.” Axell’s client list is a who’s who among corporations: General Electric, the Make-A-Wish Foundation, McDonald’s, and Time Warner, to name a few. His blend of magic, psychology, misdirection, showmanship, and humor inspires, bewilders, and delights audiences of all ages.

Axell has traveled the globe over the last decade; directs the highest rated magic show in New York City, “A Taste of Magic”; consults with Broadway and off-Broadway shows; runs his own monthly one-man mentalism show, “Determined”; and most recently was on the Emmy Award-winning National Geographic program “Brain Games.”

Axell astounds and mesmerizes everyone who sees him. Emmy and Tony award-winning actor David Hyde Pierce raved that Axell was “amazing” and wished he “could do that!” Survivorman Les Stroud said Axell’s performance “brought me back to Johnny Carson and the greats!”

Axell is no stranger to the Damariscotta Pumpkinfest & Regatta. He’s been among the most popular busker performers in the past years. Axell will bring his fantastic, magical “Determined” show to Lincoln Theater for one night only. It’s an absolutely terrific, down-to-earth party that is a bargain at the suggested $5 donation.