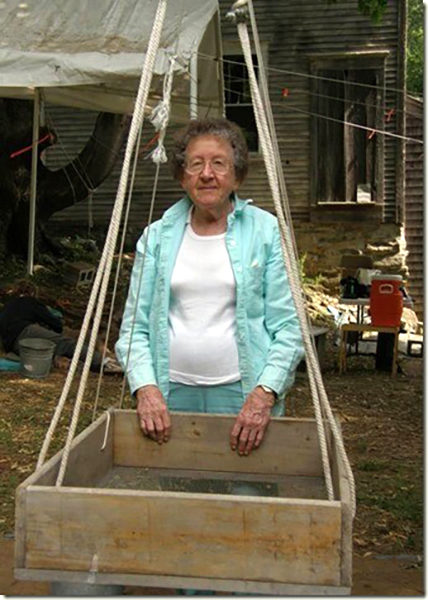 Muriel Wilhelm at the Bryant-Barker tavern site in Newcastle, part of the 18th-century Barstow-Bryant shipbuilding complex.

Residents of Schooner Cove in Damariscotta and local community members will soon have an opportunity to learn more about a fascinating chapter of local Damariscotta history. Historical archaeologist Tim Dinsmore will present a discussion about recent developments in his ongoing dig in nearby Newcastle at 2 p.m., Monday, Dec. 5 in the library of Schooner Cove, 35 Schooner St., Damariscotta. The event is free.

Dinsmore has been at work for more than 25 years focusing on the foundations of Maine’s shipbuilding industry that began along the banks of the Damariscotta River in the late 1700s. He studied at both the University of Maine and the College of William & Mary in Virginia. Dinsmore owns and operates Midcoast Archaeology and has more than 30 years of experience in the field.

The origins of Damariscotta shipbuilding began with residents George Barstow and Nathaniel Bryant, as well as blacksmith Elisha Hatch. All three men came to the area from Scituate, Hanover, and Marshfield, Mass., seeking to forge new opportunities in the Newcastle-Damariscotta region, an area that was perfectly suited for shipbuilding at the time.

The Barstow and Bryant families created homesteads near each other, for ease of work and companionship, and were soon joined by their associate and friend, Hatch. The three men formed the earliest shipbuilding center in the area and are credited with creating an industry that would transform the Damariscotta region into a dynamic shipbuilding town, known and respected along the entire Eastern seaboard well into the early 20th century.

Joining Dinsmore at the lecture will be longtime friend and frequent site assistant Muriel Wilhelm. Naturally curious and meticulous, Wilhelm is a resident of Schooner Cove who has worked with Dinsmore on several engagements over the past two decades. Dinsmore credits Wilhelm with being an especially keen steward of the many artifacts that have been found throughout the years, carefully washing and sorting the pieces that all must be catalogued and stored for preservation.

To date, Dinsmore and his crew have uncovered more than 100,000 artifacts that make up the Barstow-Bryant site. Dinsmore is still working to catalog the items with the intended goal of writing a book about the site and its significant historical impact. Wilhelm’s sister and others accompany him in this archival work to this day.