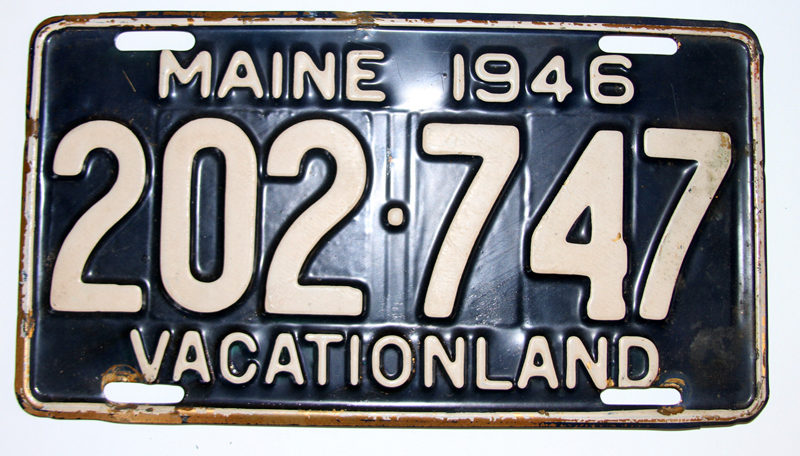 A Maine license plate from 1946

On Sunday, March 19 at 2 p.m., Boothbay Railway Village will present a talk titled “A Moving History: An Illustrated Talk on License Plates from Maine and Around the World,” by license-plate historian, author, and collector Tim Stentiford. The historical and sometimes hysterical stories of these plates, illustrated with Stentiford’s collection of more than 5,000 license plates, include the little-known story about how Maine’s motto “Vacationland,” the world’s oldest slogan on a license plate, almost didn’t come to be, and the story about a strange battle between lobsters and chickadees, which produced the rarest Maine license plate.

Stentiford’s stories span three centuries and include dozens of examples of some of the world’s most sought-after license plates, including the earliest Maine license plates from 1905, as well as political plates from governors and presidents, controversial plates that landed in the Supreme Court, award-winning plates, and the world’s rarest plate from the smallest country in the world. Audience members are invited to bring their favorite license plates to share with the group.

Stentiford is from Kennebunk and is the owner of Motorland, a classic-car showroom and service center in Arundel, with more than 100 vintage vehicles in its inventory. He has been researching, collecting, and writing about license plates for more than 40 years. Stentiford has been a member of license plate clubs since the 1970s, was interviewed by Forbes Magazine and the New York Times about license plates, and has consulted with film crews and detectives.