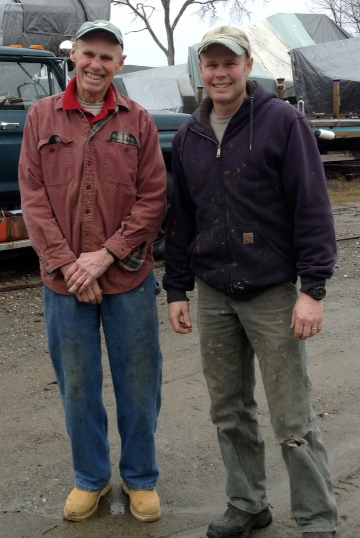 Paul Bryant (left) will talk about the boats he designed and built at Riverside Boat Co. on Friday, April 20 at 7 p.m. in Newcastle. His son, Nat Bryant (right), is the third generation to carry on the work.

The Nobleboro Historical Society and the Newcastle Historical Society are proud to co-sponsor this program that will include a bit of Bryant family history and their boat-building tradition, pictures and stories of some of the boats built at Riverside Boat, as well as photos showing how to hand-build a custom wooden boat in a mere 1,800 hours. It should be a fascinating program, as Bryant is a wonderful storyteller who knows these boats well.

Paul’s father, boat builder and designer Creston Bryant, started the boat yard more than 80 years ago in 1936 on Liberty Street. However, the Bryant family roots on the Damariscotta River waterfront date to the 1760s, when the first Nathaniel Bryant settled there and built the first of this family’s shipyard enterprises. The second Nathaniel Bryant built another shipyard in Newcastle and some four-masters were launched at what is now The Lincoln Home. A Bryant shipyard was also one of several yards building sailing ships on Great Salt Bay from the late 1700s into the mid-1800s. These ships went through the shallow part of the Damariscotta River and through the rotating bridge to the ocean.

Creston Bryant built wooden skiffs and sailboats, with time out for World War II, when he built minesweepers at Harry Marr’s Shipyard in the back parking area in Damariscotta and then installed radar on destroyers at Bath Iron Works, after which he returned to the Riverside Boat Co. Paul Bryant worked with his father after he graduated from Lincoln Academy in 1961, until Creston Bryant’s death in 1971, when he took over the business.

Paul Bryant’s wife, Linda, is part of the team, too, as she does “the best paint work” on the finished boats and also runs the office.

The Bryant boat building tradition continued when Paul’s son, Nat, the sixth Nathaniel Bryant in the family tree, joined Riverside Boat in 2003 after 10 years of school and experience designing and building boats at The Landing School in Kennebunk and Westlawn School of Yacht Design, and working with boat designer Walter Wales at Hodgdon Yachts and other places.

This presentation will include pictures of some of the unique and graceful wooden boats designed and built by Creston, Paul, and Nat Bryant. Initially, Creston Bryant built 12-foot class sailboats that he designed, called the Skipper, and then he designed and built 15-foot class sailboats called the Valentine. Paul Bryant built one of the Valentine class when he was a sophomore at LA for his own use.

Constructing a wooden boat is a complicated, fascinating, and exacting process and Paul Bryant will show a series of pictures of how a boat they just finished was built. Riverside Boat Co. also does repair on the wooden boats, so these classics can sail or motor yet another summer in Maine. This family is the family doctor for wooden boats and they set exactingly high standards.

The meeting is open to the public and is free. There will be a short business meeting before the meeting and light refreshments will be served afterwards. The Newcastle fire station community room is located at 86 River Road in Newcastle, in the same building as the fire station. Parking is available on both sides of the building, but one should not block fire engine doors.

For more information, contact Mary Sheldon at 563-5376 or sheldon@tidewater.net.