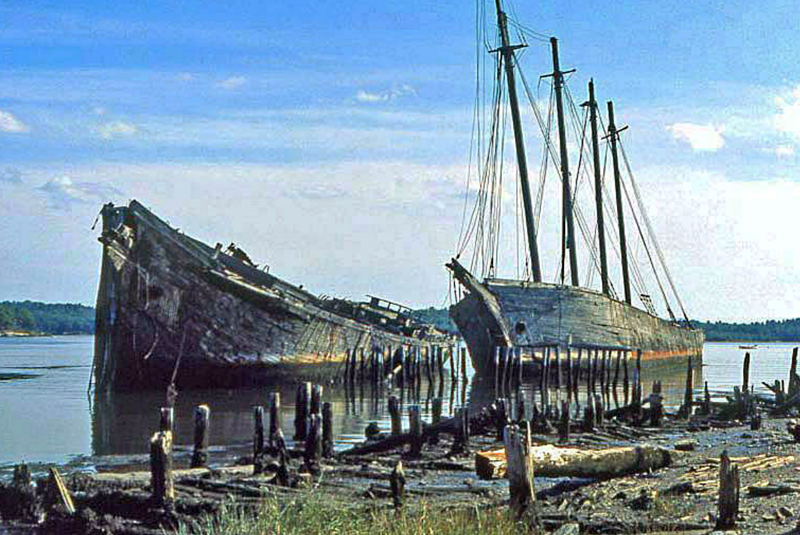 The Hesper will be one of the many schooners celebrated at Wiscasset Schoonerfest this August.

When and If, an 82-year-old Wiscasset-built schooner, will return to her original home port as the centerpiece of Wiscasset’s Schoonerfest in August.

Shipyard owner F. F. Pendleton would later tell the Portland Press Herald “Gen. Patton thought the world of that boat I built for him. When the contract was made, [Patton] said, ‘I’ve got the money for her now and I’m going to plank it into her and then I’ll have her. Nobody knows what the value of money’s going to be later, but a boat’s a boat and if she’s bronzed-fastened she’s pretty nearly immortal.’”

A canon salute on the morning of Thursday, Aug. 19 will welcome When and If home and the vessel will be available for tours and day sails through Sunday, Aug. 22, the close of the festival.

On the evening of Saturday, Aug. 21, the ship Patton built will lead a lighted boats parade around Wiscasset harbor. She’ll be joined at the head of that gathering by two other notable vessels, Sycamore and Pagan Moon.

Sycamore, a 4-year-old, 52-foot steel, two-masted schooner whose current home port is Wiscasset, was 16 years in the making in the backyard of Fred and Mary Bowers’ Alna home. Its design honors “pinky” schooners, meaning the stern is “pinked” or pinched together, that supported Maine fisheries a century-and-a-half ago.

Crafts of all shapes and sizes will be invited to join the lighted-boat procession Saturday night. “We’re paying homage to the nautical heritage of Wiscasset,” said Schoonerfest committee member Sherri Dunbar. “And while we’ll all have the pleasure of enjoying truly magnificent ships, we’ll also be honoring the history and memory of Hesper (201 feet in length) and Luther Little (204 feet) that were traffic-stopping sites — majestic 200-foot vessels grounded permanently in the 1930s that survived, in bits and pieces, until 1998.”

While those bridge-side relics were bridge-side attractions for 60 years, and traffic snarlers before anyone thought to blame streetlights or a street-corner lobster shack, their memory is a reminder of Wiscasset’s past.

“Maine’s third-deepest harbor was a global center of ship-building, commerce, and shipping back to the 18th century,” Dunbar said.

Just as people competed in sailing and rowing competitions two centuries ago, so will Schoonerfest host sailboat and rowing races. And just as Wiscasset was every bit a town of families in the 1800s, so will the celebration of the past tend to the needs of children, with face-painting, bail-bucket races, and lobster corn-hole games.

To support a true community event, the town of Wiscasset also has signed on to support Schoonerfest, providing police, fire, and emergency support services to event attendees.

The Wiscasset Creative Alliance, a 501(c)(3) nonprofit organization, is Schoonerfest’s parent and partner.

For additional information on Schoonerfest, its full calendar of events, or complete list of sponsors, email Peter Wells at newsletters@email.bostonglobe.com or call 413-695-5419.