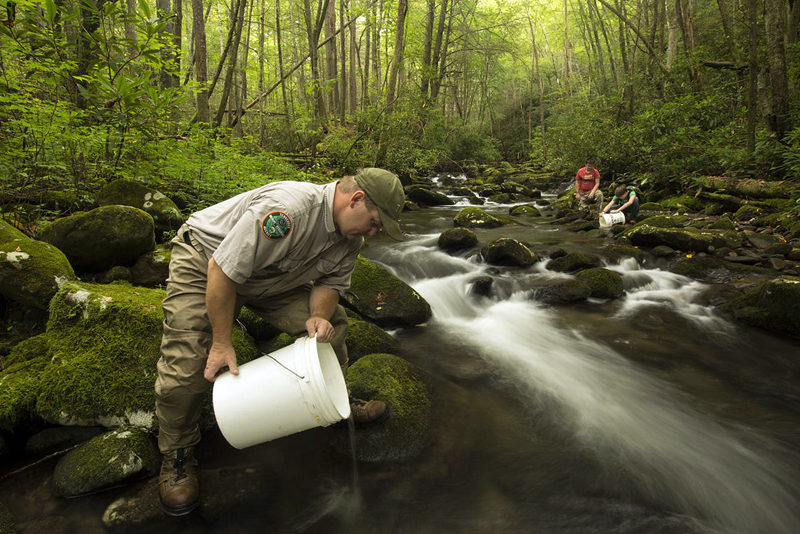 A scene from the short film Bringing Back the Brooks, a poetic look at the Southern Appalachian brook trout, which is being brought back from the brink  by hand, bucket and hoof. The film is part of the Wild and Scenic Film Festival to be hosted by the Damariscotta River Association in February.

The Damariscotta River Association will host the touring Wild and Scenic Film Festival at Lincoln Theater in Damariscotta on Tuesday and Thursday, Feb. 7 and 9. The event will run from 7-9 p.m. both evenings.

The Wild and Scenic Film Festival, now in its 14th year, is a collection of films from the annual festival held the third week of January in Nevada City, Calif. It focuses on films that speak to the environmental concerns and celebrations of our planet. “Films featured at Wild and Scenic give people a sense of place,” said Amelia Workman, associate director of the current Wild and Scenic Film Festival tour. “In today’s busy world, it is easy to disconnect from our role in the global ecosystem. When we realize that the change we need in this world begins with us, we start making a difference. Come get inspired!”

On Feb. 7, 12 short films themed “Inspired by Nature” invite viewers to journey from their own backyards to wilderness areas at the far reaches of the earth. The films explore a variety of wildlife and conservation issues and the inspiring solutions being explored by diverse communities.

The Feb. 9 films pose the question, “What Will Your Legacy Be?” These 13 shorts focus on the power each of us has to make positive impacts on the environment. From personal journeys to positive global change, these motivating films offer thought-provoking storytelling that will encourage everyone to think about their own legacy.

The Wild and Scenic Film Festival was started by the watershed advocacy group, the South Yuba River Citizens League in 2003. The festival’s namesake is in celebration of SYRCL’s landmark victory to receive “wild and scenic” status for 39 miles of the South Yuba River in 1999.

The five-day event in California features more than 150 award-winning films and welcomes more 100 guest speakers, celebrities, and activists who bring a human face to the environmental movement. The home festival kicks off the international tour to more than 150 communities around the globe, allowing SYRCL to share its success as an environmental group with other organizations.

The festival is building a network of grassroots organizations connected by a common goal of using film to inspire activism. The festival is a natural extension of the Damariscotta River Association’s work to inspire people to act on behalf of the environment. The DRA is a nonprofit, membership-supported, and nationally accredited land trust and conservation organization dedicated to preserving and promoting the natural, cultural, and historical heritage of the Damariscotta region, centered on the Damariscotta River. The organization has active programs in the areas of land conservation, stewardship, community education, water-quality monitoring, marine conservation, and cultural preservation.