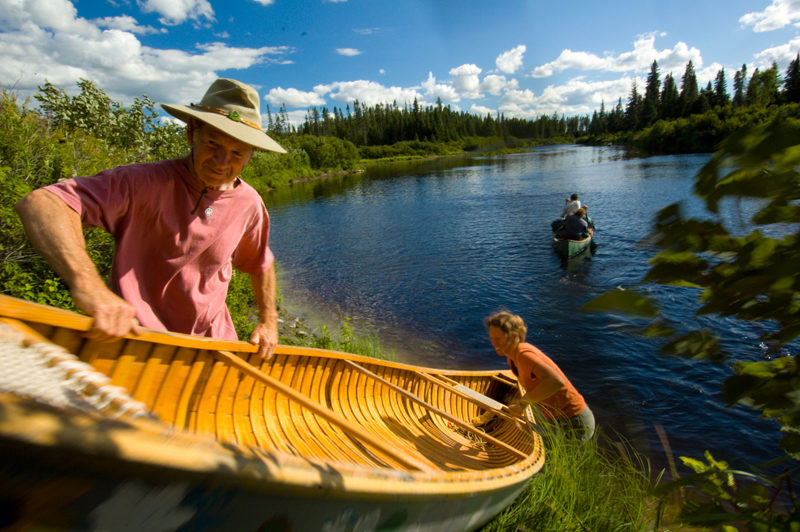 Maine wilderness guide and philosopher Ray Reitze is the subject of Guided, one of the short films to be featured on Feb. 7 at the Wild & Scenic Film Festival.

The Wild & Scenic Film Festival comes to Damariscotta on Tuesday and Thursday, Feb. 7 and 9. It is being brought to the big screen at Lincoln Theater by the Damariscotta River Association. A different collection of short films will be shown each night from 7-9 p.m.

The Wild & Scenic Film Festival on Tour, now in its 15th year, is a selection of films from the annual festival organized and produced by the South Yuba River Citizens League in Nevada City, Calif. The festival focuses on films that speak to the environmental concerns and celebrations of the planet. “Films featured at Wild & Scenic give people a sense of place,” said the tour’s associate director, Amelia Workman. “In today’s busy world, it is easy to disconnect from our role in the global ecosystem. When we realize that the change we need in this world begins with us, we start making a difference. Come get inspired!”

On Feb. 7, nine short films themed “Inspired by Nature” invite viewers to journey from their own backyards to wilderness areas at the far reaches of the earth and beyond.

In the short film “Guided,” filmgoers will meet Ray Reitze, a Maine wilderness guide who shares his philosophy of how to live in harmony with the outdoors. “Pale Blue Dot” uses the words of Carl Sagan combined with music and visuals to situate human history against the tapestry of the cosmos. “The Refuge” introduces viewers to the Gwich people of Alaska and northern Canada, who are fighting to protect their land and future.

The Feb. 9 films explore the question, “What Will Your Legacy Be?” These 13 shorts focus on the power each of us has to make positive impacts on the environment.

“Leave It As It Is” focuses on the battery of threats facing the Grand Canyon – one of the most iconic landscapes on the planet – and opportunities to protect it. In “An Education: A Father/Daughter Trip of Discovery,” National Geographic explorer Mike Libecki tackles his 58th expedition with his 11-year-old daughter Lilliana on a life-changing skiing expedition to Antarctica. “Defined by the Line” tells the story of Josh Ewing, who fell in love with the Bears Ears region of southeastern Utah and came to realize when simply loving a place is not enough.

The Wild & Scenic Film Festival is building a network of grassroots organizations connected by a common goal of using film to inspire activism. The festival is a natural extension of the Damariscotta River Association’s work to inspire people to act on behalf of the environment. The DRA is a nonprofit, membership-supported, and nationally accredited land trust and conservation organization dedicated to preserving and promoting the natural, cultural, and historical heritage of the Damariscotta region, centered on the Damariscotta River. The organization has active programs in the areas of land conservation, stewardship, community education, water-quality monitoring, marine conservation, and cultural preservation.