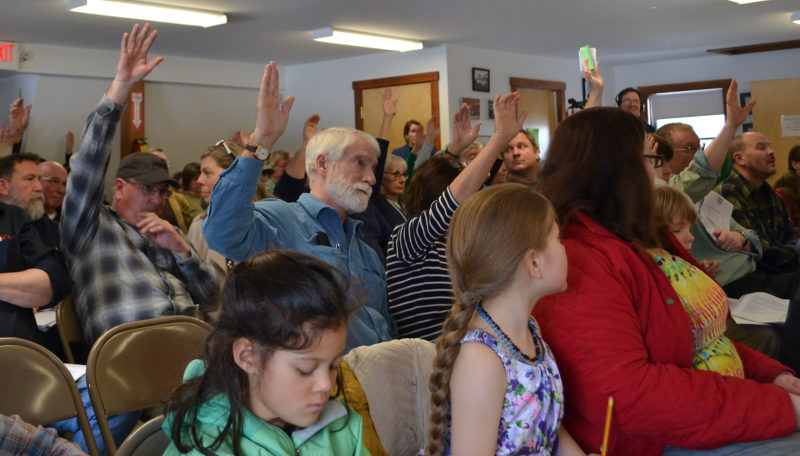 Alna residents voted to restrict K-8 school choice to public schools and to purchase a modular building to replace the town office during the annual town meeting Friday and Saturday, March 23 and 24.

Ralph Hilton submitted a petition for the referendum on school choice. The town will continue to pay tuition for high school students to either public or private schools. The change will take effect June 30.

The change will not affect children who live in Alna as of June 30, according to the referendum.

Prior to the vote, the referendum was the subject of much discussion, including almost seven hours of public hearings on two evenings.

Many parents spoke against the change, while those in favor expressed concerns about rising property taxes and the importance of supporting public schools.

The Alna vote is the first part of a three-step process. The RSU 12 Board of Directors will have to approve the change with a two-thirds majority of the board. Each town in the district will then have to vote to approve an amendment to the district’s reorganization plan.

Voters also elected Melissa Spinney first selectman with 258 votes to 149 for Shanon Cotta. Spinney, who was in the middle of her second term as second selectman, replaces David Abbott, who did not seek re-election.

The selectmen will discuss how to fill the second selectman’s seat for the remainder of the term during their meeting Wednesday, March 28, according to Town Clerk Liz Brown.

Hilton defeated Abigail Manahan for an RSU 12 Board of Directors seat 213-180.

The decision about the town office was the only article of the 45-article warrant to garner significant discussion during the two-hour open meeting Saturday morning.

The second option called for a 180-square-foot addition onto the meeting room at the existing town office, along with a complete renovation, including making the building energy efficient and compliant with the Americans with Disabilities Act.

The final option called for the renovation of the office without the addition.

While the warrant did not include prices for the three options, the Alna Board of Selectman provided a handout with the approximate costs.

The total cost of the first option was estimated to be $141,400 once the new town office is in place and the former has been sold.

Maine Modular & Manufactured Homes Inc., of Waldoboro, provided the selectmen a price of $241,400, which includes the costs of a gravel driveway and parking lot as well as a well and septic system. Two real-estate agents estimated that the current town office could be sold for about $130,000.

According to the handout, the new building will separate the office space from the meeting room to allow the latter to be used for town functions and community events while the office is closed.

The second option, to renovate and expand the existing office, would have cost $238,420, according to the handout.

The third option, to renovate the town office “up to the standards of a new building” and make it compliant with the Americans with Disabilities Act, was estimated to cost $122,420, according to the handout.

Resident Ed Pentaleri made a motion to approve the first option, which residents proceeded to discuss for the following hour.

Pentaleri compared the current town office to a secondhand car purchased with high mileage years ago that has rusted out and needs more and more maintenance.

“You can spend money to bring it back to what it was, but it’s still a renovated old beater,” Pentaleri said.

When a resident asked for the selectmen’s opinion, all three said they are in favor of the first option.

Third Selectman Doug Baston said it would provide the town “a functional office rather than a house we had tried to make into an office,” while Spinney said the operating costs of the new building would be less over time than the renovated current office.

Rather than sell the current town office and 2 acres of land, Alna Fire Chief Mike Trask suggested that the town place the new office in the footprint of the current building, which already has a well and septic system, as well as a parking lot nearby.

Former Second Selectman Jon Villeneuve and other speakers agreed. Villeneuve also expressed concern about Alna’s lack of a capital improvement plan for its buildings, something that had been talked about in the past.

Judy Greenleaf, who recently retired from her job as Alna’s deputy town clerk, expressed support for the first option. Space is limited at the town office, she said, and if more than two people are working, “they’ll knock into each other.”

Hilton made the motion to end debate and vote. After a show of hands by residents, moderator Chris Cooper declared the motion passed.

Voters also authorized the selectmen to take out a $260,000, 30-year loan for the project and to raise and expend $10,300 in taxes for the first year of the mortgage.

The rest of the articles generated little discussion, and the meeting came to a close shortly before noon. Before asking if there was a motion to adjourn, Cooper thanked residents for “a brief and almost entirely agreeable meeting.”

“Everyone in this room knows we’ve had a difficult year, and to come together today and treat each other decently is probably the highest accolade any of us could give each other,” Cooper said.

During secret-ballot voting, residents also approved changes to the town’s rules for alcohol sales. Villeneuve and Alna General Store co-owner Ken Solorzano proposed the changes, which will allow the state to issue licenses for the sale of liquor for on-premises consumption.

The first article, regarding on-premises consumption on days other than Sunday, passed 318-95.

The second question, regarding on-premises consumption on Sunday, passed 280-135.