A pickup truck stolen from Rockport was set on fire outside the Lincoln County Fish & Game Club of Waldoboro on Friday night. The fire consumed the truck and spread to the side of the clubhouse, but a swift response minimized damage to the structure.

The building was “secure and vacant” when the fire started and there were no injuries, according to Waldoboro Fire Chief Paul Smeltzer. The clubhouse is on Cross Street, at the intersection with Depot Street and Wagner Bridge Road. 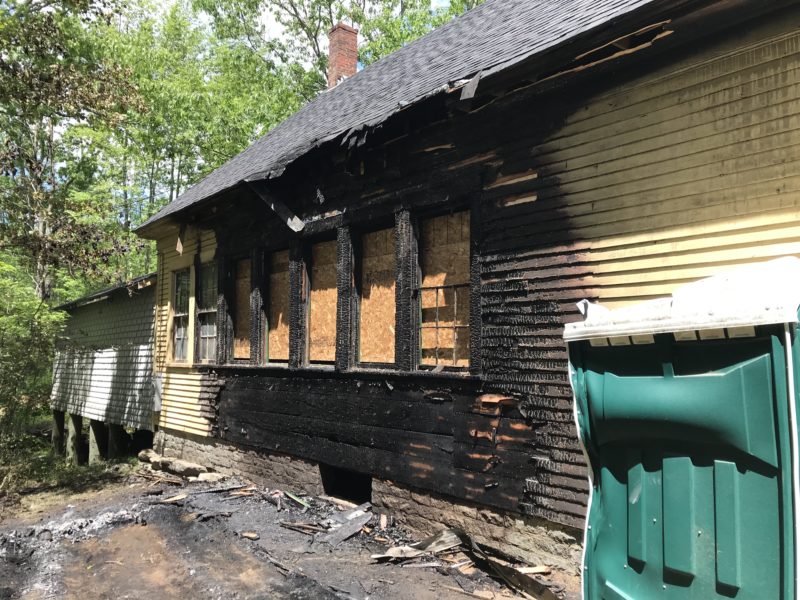 Damage to the side of the Lincoln County Fish & Game Club building and a port-a-potty on Cross Street in Waldoboro. A stolen vehicle was set on fire next to the clubhouse and the flames spread to the structure, according to an investigator. (J.W. Oliver photo)

Lincoln County Communications dispatched the Waldoboro Fire Department for a vehicle fire at 9:19 p.m. While en route, firefighters learned the fire had spread to the building.

The truck was engulfed in flames when firefighters arrived and the outside of the building was just beginning to catch, with flames going into the eaves and attic, according to Smeltzer.

While one group of firefighters attacked the blaze outside, another went in through the front door and eventually to a crawl space in the attic to beat back the fire there.

The fire was out within about 10-15 minutes, although it took more time to overhaul the building and search for hot spots. The truck was towed away. Smeltzer said he left the scene at about 12:15 a.m. Saturday.

Fire damage inside the clubhouse is “relatively minimal,” Smeltzer said, although there is “significant water damage” on the first floor. Most of the fire damage was to the outside wall on the side of the building that faces away from the intersection. The fire also damaged a port-a-potty at the corner of the building.

Club members told Smeltzer the club has insurance on the building.

The location benefited firefighters, as there is a fire hydrant almost directly across the street. “We were very fortunate,” Smeltzer said.

The clubhouse was originally a one-room schoolhouse, according to Smeltzer, but has been the club’s headquarters for many years. A one-story building with an attic, it contains an indoor rifle range.

The club was established in the 1950s, according to its Facebook page.

The clubhouse is just down the road from the former Agway store at 115 Cross St., where a fire was set in October 2019. The Fire Marshal’s Office has also been investigating a May 17 arson at Finest Kind Medicinals, on Route 1.