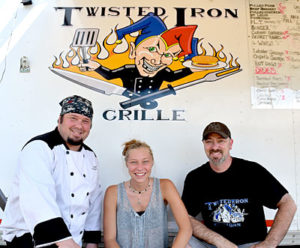 A new barbecue stand is now open on Route 1 in Wiscasset, and combines “old-school barbecue” flavors with unique menu items, all at affordable prices.

Michael Benner, of Friendship, owns both businesses. His brother, Travis Benner, of Alna, cooks and runs the barbecue stand.

Travis Benner brings experience as a chef to the business. 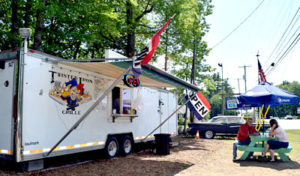 Customers of Twisted Iron Grille can eat at the picnic tables outside or order their food to go. (J.W. Oliver photo)

“I’ve worked in restaurants all my life,” he said. He has been a sous chef at the Damariscotta River Grill and the executive chef for the residential program at Lincoln Academy, and he also worked at the Robinhood Free Meetinghouse in Georgetown.

Before opening Twisted Iron Grille, Benner had been working for his brother at the shop. He worked at the counter, ordered parts, and turned wrenches, but his passion was still cooking. “I just wanted to do something for myself,” he said.

His brother bought the former Sea Digger’s Grub trailer from Tony True, of Wiscasset, and set it up next to his shop. Sea Digger’s Grub, a seafood takeout spot, had been set up at 257 Bath Road, further north and on the opposite side of Route 1.

The barbecue trailer is stationary, but similar to a food truck in appearance and style.

“I’ve always wanted a (food truck),” Travis Benner said. “It seemed like it’d be something that’s fun to do, and I think Wiscasset needs something like this.”

Twisted Iron Grille specializes in “old-school barbecue,” he said. Benner smokes the meat over a wood fire and uses mostly maple and oak.

The wood fire requires constant attention to maintain the temperature at 200-225 degrees Fahrenheit. The beef brisket cooks for 16-18 hours, the pork butt for 10 hours, and the pork belly and ribs for four to six hours.

Twisted Iron Grille customers can find items one would expect at a barbecue place, like beef brisket ($6.50), pulled chicken or pork ($5), or St. Louis pork ribs ($9 for a half-rack or $16 for a full).

Travis Benner also uses his smoky meats in a cubano sandwich ($6.50) – one of his most popular menu items so far – as well as a “PLT” (pork belly, lettuce, and tomato, $4), and tacos with beef brisket or pork belly ($4).

The menu includes traditional fare like hamburgers ($5) and hot dogs ($2), as well as items likely unavailable anywhere else in the county, like a grilled peanut-butter-and-jelly sandwich ($2) and a lobster sausage ($8), which comes on a beer bun with mayonnaise.

Travis Benner makes the lobster sausage himself. He buys the lobster fresh; cooks, cleans, and picks it himself; grinds the pork; and packs the mixture into a natural casing.

The lobster sausage might not be for everyone, but he encourages everyone to try it.

One skeptical customer poked fun at the menu item and even called it “stupid,” Benner said, but then he tried his friend’s. He returned to the counter to order two for himself, then came back for two more to take home to his wife.

The barbecue joint and the custom shop might not seem like an obvious match, but the Benner brothers said it’s common to see garages and restaurants in the same building down South.

Michael Benner said he welcomes customers to look around at the cars and motorcycles on the lot – some are for sale and many are antiques – or even come in the shop and see what they’re building. There’s also a tire swing for the kids.

“It’s just a cool place to go,” Michael Benner said. “It’s more like a destination than just a place to grab a quick sandwich.”

Travis Benner said the business and his food have met with a positive reception so far. Family, friends, and locals have made up much of the early wave of customers as the business establishes itself. “Without them, we wouldn’t be here,” he said.

Family also makes up much of the staff. Travis Benner’s wife, Cristie Benner, helps out, as do Michael Benner and his fiancee, Shelby Bertrand, when they can take a few minutes away from the shop. Michael and Travis Benner’s niece, Isabella Benner, works the counter, and Seth Bailey, a former co-worker of Travis Benner’s at the Damariscotta River Grill, is also on the staff.

Twisted Iron Grille is open from 11 a.m. to 10 p.m. Sunday-Wednesday and 11 a.m. to 11 p.m. Thursday-Saturday at 424 Bath Road (Route 1) in Wiscasset. Customers can eat at the picnic tables outside or take their food to go. For more information, go to facebook.com/twistedirongrille. To place an order, call 380-3651.