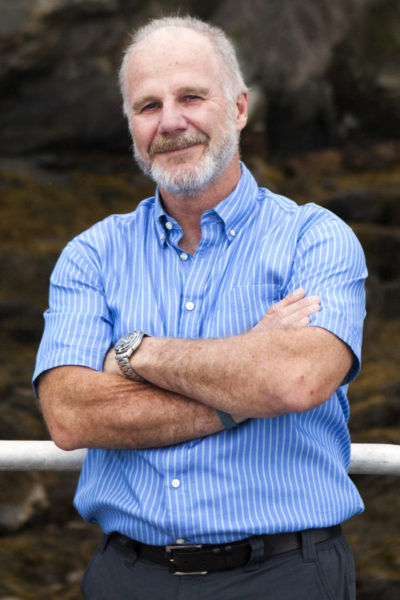 Graham Shimmield, executive director of the Bigelow Laboratory for Ocean Sciences, died Saturday, Dec. 24 after a hard-fought battle with cancer.

A globally recognized leader in oceanography, Shimmield had served in his role at Bigelow Laboratory since 2008. During his tenure, he transformed the organization, building upon its long-standing scientific reputation to develop a $32 million marine research and education campus in East Boothbay, which opened in 2012, along with a $6 million residence facility that will open in spring 2017.

“Graham was an accomplished scientist, a visionary leader, and a kind and compassionate human being who changed our organization and our lives,” said Ben Twining, a vice president and senior research scientist at Bigelow Laboratory who is now serving as acting executive director. “We were very lucky to have him at the helm for the last nine years.”

He held an array of leadership positions with national and international groups during his career, including president and vice president of the European Federation of Marine Sciences and Technology Societies, chairman of the European Census of Marine Life, and chairman of the International Science Advisory Board for the Decommissioning of Man-Made Structures in the North Sea, Oil & Gas.

Since arriving in Maine in 2008, he served on the boards of the Maine Innovation Economy Advisory Board, Maine Space Grant, Maine Sea Grant, and advisory boards for Maine Maritime Academy and Mount Desert Island Biological Laboratory. In 2013, he was elected to the board of trustees for the Consortium for Ocean Leadership in Washington, D.C. In July 2015, he was named as one of the top 50 “Bold Visionaries Defining Our State” by Maine Magazine.

“Graham’s vision, knowledge, and devotion to Bigelow Laboratory, along with his ability to manage many challenges with care and gentleness, defined him as a leader,” said Herbert Paris, chair of the Bigelow Laboratory board of trustees. “Graham enriched all of us who had the privilege of working with him. He was the guiding force that brought Bigelow Laboratory to international recognition. His passing is tragic, and it has left us deeply saddened.”

Shimmield was born in Pointe-a-Pierre, Trinidad, on Dec. 1, 1958. A citizen of the U.K., he received a doctorate from the University of Edinburgh in Scotland. His research focused on identifying indicators of climate change and examining human impacts on the ocean. Throughout his career, his work took him to every ocean on the planet, from Pacific coral reefs impacted by El Nino to polar regions affected by melting sea ice.

In 1997, Shimmield became managing director of the Scottish Association for Marine Science, where he served until moving to the U.S. to assume his role at Bigelow Laboratory for Ocean Sciences. There he led the independent, not-for-profit research institution that studies the ocean and how it is changing – from the biology and ecology of marine micro-organisms to large-scale ocean processes that affect the global environment.

“Under Graham’s leadership, Bigelow Laboratory has nearly doubled in size, developed significant education programs, launched a successful philanthropy program to support our work, and increased the reach and impact of our science through expanded outreach and our Centers for Venture Research,” Twining said. “Graham was committed to contributing to innovation and growth in Maine’s economy through our research and partnerships around the state.”

Bigelow Laboratory plans to arrange a celebration of Shimmield’s life in the spring, and it will provide the details of that event at a later date. To help support his legacy, the laboratory has established an endowment fund in Shimmield’s honor. Contributions to the Dr. Graham Shimmield Endowment Fund may be sent to Bigelow Laboratory for Ocean Sciences, P.O. Box 380, East Boothbay, ME 04544.