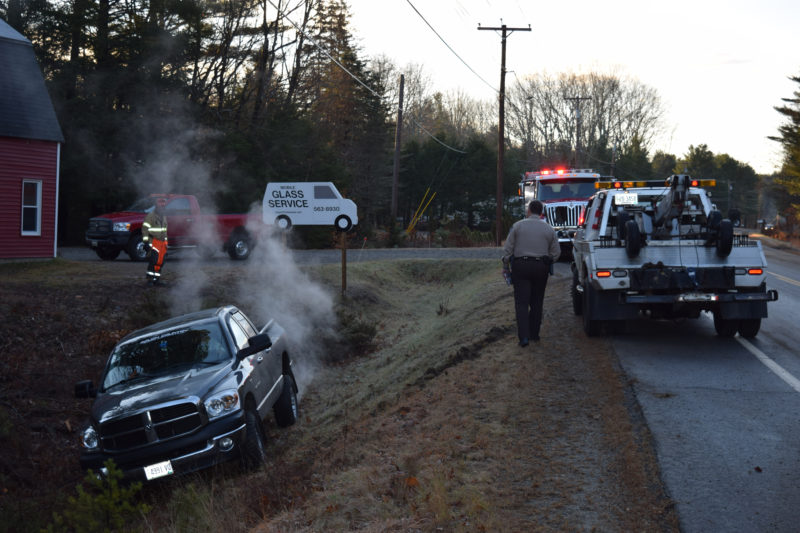 The driver of a Dodge pickup truck attempts to free it from a ditch alongside Bristol Road (Route 130) in Bristol the morning of Friday, Dec. 2. Black ice was a factor in the slide-off, as well as a rollover in Dresden later the same morning, according to Lincoln County Sheriff’s Office Lt. Rand Maker. (J.W. Oliver photo)

Black ice was a factor in accidents in Bristol and Dresden during the morning commute Friday, Dec. 2. There were no injuries in either accident.

A 16-year-old male juvenile, of Bristol, was driving a 2007 Dodge pickup truck north on Bristol Road (Route 130) in Bristol when, due to the black ice, he lost control of the vehicle, which left the road and entered a ditch on the northbound side near the driveway for Mobile Glass Service, according to Lincoln County Sheriff’s Office Lt. Rand Maker.

Lincoln County Communications dispatched the Bristol Fire Department to the accident at 7:13 a.m.

The juvenile was not hurt and there were no passengers in the vehicle, according to Maker. The only damage to the vehicle was scratches from roadside brush.

Nathan T. Cowing, 43, of Dresden, was driving a 2004 GMC 1500 pickup truck south on Middle Road when he entered a curve and lost traction due to the black ice, according to Maker. The vehicle crossed the centerline, went off the road on the opposite side, rolled over once, and came to rest on its roof.

Cowing was not hurt, according to Maker. He had been wearing his seat belt at the time of the accident. The vehicle sustained damage to its roof and is likely totaled.

Friday’s accidents should serve as a reminder to motorists to beware of black ice, according to Maker, and of the arrival of winter driving conditions in general.