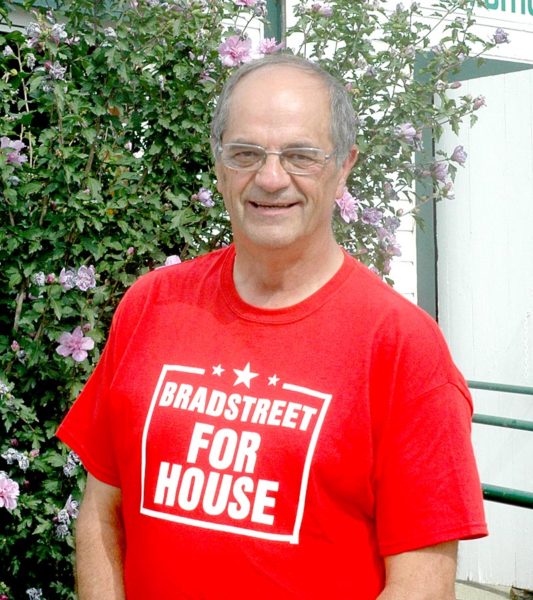 A Vassalboro businessman is hoping to aid small businesses and bring more economic opportunity to the state of Maine in his campaign for the Legislature.

Richard Bradstreet is looking to represent Maine House District 80, which includes the Lincoln County town of Somerville and the unorganized territory of Hibbert’s Gore, in the state Legislature.

Bradstreet said he believes the Legislature can play a role in improving the economic situation in districts across the state and said one of his goals is to attract more businesses to Maine.

“We have to be on our toes and aware in Augusta that what we do can have adverse impacts on small businesses,” Bradstreet said.

Bradstreet said that throughout his career he has been charged with bringing people together, and he believes he is a level-headed individual able to bridge gaps in Augusta.

“You can’t always be at loggerheads. You do have to work together,” Bradstreet said.

He said he believes his time as a small-business owner will lend itself to creating jobs for Maine businesses.

“What I can do is bring my small-business perspective to help form legislative policy to encourage job creation,” Bradstreet said.

He said the Legislature doesn’t always grasp how difficult it is to get a business off the ground and sometimes inadvertently makes the process tougher.

He views working with both Republicans and Democrats as a critical step forward.

“A lot of us are on the same page but we don’t really realize it,” Bradstreet said.

Bradstreet believes the solution to creating more economic opportunity is a bipartisan effort to support local businesses, stressing both parties have common interests at stake.

“We need to work together as a team to formulate policies conducive to starting up small businesses,” Bradstreet said.

Bradstreet said a major reason he entered the campaign was to assist in creating opportunities for the state’s younger residents.

“The basic reason I am running is I feel our children and grandchildren don’t see a whole lot of opportunity for them here,” Bradstreet said.

He said the Legislature needs to work on retaining skilled workers.

“We can’t train a workforce that is going to be shipped out of state,” Bradstreet said.

Bradstreet emphasized the importance of technical schools to employees and employers.

“We need to start making them a higher priority. It’s been put on the second level for too long. We need to work with vocational schools,” Bradstreet said.

In regards to health care, Bradstreet said he believes the Affordable Care Act is not the way to go.

“The way it is constructed has shown it’s not going to work. I think the best way forward is to work with private companies to make it competitive,” Bradstreet said.

The state’s growing opioid crisis is another issue Bradstreet knows is important to the community.

He sees the crisis as another opportunity for legislators from both parties to work together and supports a process of treatment, education, and interdiction.

“I think we are headed down the right track, finally. We have to see how we can work with people in the medical industry and in law enforcement,” Bradstreet said.

Bradstreet, who describes himself as semi-retired, said he has spent most of his career in the housing industry and serves on the state Manufactured Housing Board.

Bradstreet is the executive director of the Manufactured Housing Association of Maine and the former president of Bradstreet Homes Inc., a modular home dealer based in Winslow, which he ran for 30 years.

He also chairs the board of the Winslow Community Credit Union.

Bradstreet has been married to his wife JoAnne for 44 years and the couple has three children and seven grandchildren.

Originally hailing from Albion, Bradstreet graduated from Lawrence High School in Fairfield as part of the class of 1969 and from Dartmouth College in Hanover, N.H., with a degree in sociology in the class of 1973.

Bradstreet has previously held elective office as a member of the school boards in the towns of Albion and Fairfield.

He has been endorsed by the Sportsman’s Alliance of Maine.

House District 80 includes part of Augusta, the unorganized territory of Hibbert’s Gore, and the towns of Somerville, Vassalboro, and Windsor.