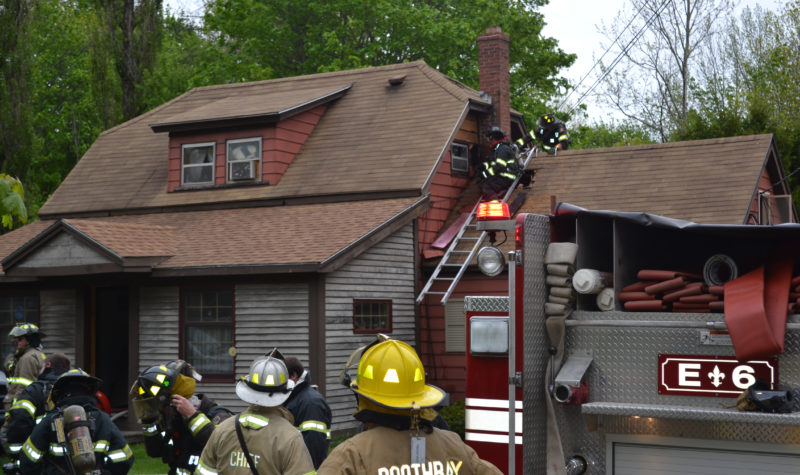 Firefighters cut out an area of roof and wall around the chimney of a Flood Avenue home to prevent the spread of a fire the afternoon of Monday, May 22. (Abigail Adams photo)

Several area fire departments prevented a chimney fire from consuming a home on Flood Avenue in Wiscasset the afternoon of Monday, May 22.

Due to extensive smoke, water, and other damage to the home, the house is not currently livable, Wiscasset Fire Chief T.J. Merry said.

Randy Wanser was the sole occupant of the home. The American Red Cross will provide Wanser with temporary assistance, a Red Cross official said.

The fire at 55 Flood Ave. was reported at about 2:24 p.m. when smoke was seen coming from the building. The fire had spread about 6-8 feet from the chimney, where it originated, when firefighters arrived on scene, Merry said.

Interior attack teams entered through the front door, extinguished the fire on the first floor, and made their way to the attic, where the fire was also burning, Merry said. “We put a quick stop to it,” he said.

However, flames continued to ignite in areas around the chimney. Portions of the walls and ceilings were removed to extinguish hot spots and prevent the fire’s spread, Merry said. A hole was cut in the roof and around a second-floor window to ventilate the attic, he said.

The Wiscasset Fire Department was assisted by the Alna, Boothbay, Dresden, Westport Island, and Woolwich fire departments. The Wiscasset Ambulance Service and the Wiscasset Police Department also responded to the scene, in addition to investigators from the Maine State Fire Marshal’s Office.

The Newcastle Fire Department was dispatched to provide station coverage for Wiscasset.

The mutual aid “was fantastic,” Merry said. “Everyone did a great job.”

While the address of the house is Flood Avenue, the entrance is on Route 1 across from 179 Bath Road, the former NAPA Auto Parts building. Route 1 was reduced to a single lane, with the northbound lane closed, during the response to the fire.