The announcement of the results by Lincoln County Republican Committee Chair Dick Mayer capped four hours of signature-gathering and speeches during the caucus at Great Salt Bay Community School in Damariscotta on Saturday, Feb. 17.

After an introduction by Mayer, Gov. Paul LePage and First Lady Ann LePage kicked off the speeches.

Gov. LePage focused on the need for Maine Republicans to unify ahead of midterm elections in November. He believes the party can keep the Blaine House, retain its majority in the Senate, and retake the House.

The governor singled Moody out for praise and defended him against criticism for his relatively recent switch to the Republican Party. Moody ran for governor as an independent in 2010.

“I’ve been a Republican since 1976,” Gov. LePage said. “Prior to that, I was from Lewiston and I didn’t dare tell anybody that I had tendencies of being conservative until I moved out of town, and then I ran to the ballot box, into the town hall, and became a Republican.

“Why did I become a Republican? … I didn’t even know what a true Republican was. All I knew is, I had conservative tendencies.”

President John F. Kennedy was “the last conservative Democrat,” the governor said, “so I had no option other than to tag along with Jerry Ford and Ronald Reagan and move forward.”

“So I don’t really care much for titles, and I thought that Shawn was a gentleman through the whole (2010) race,” he said. 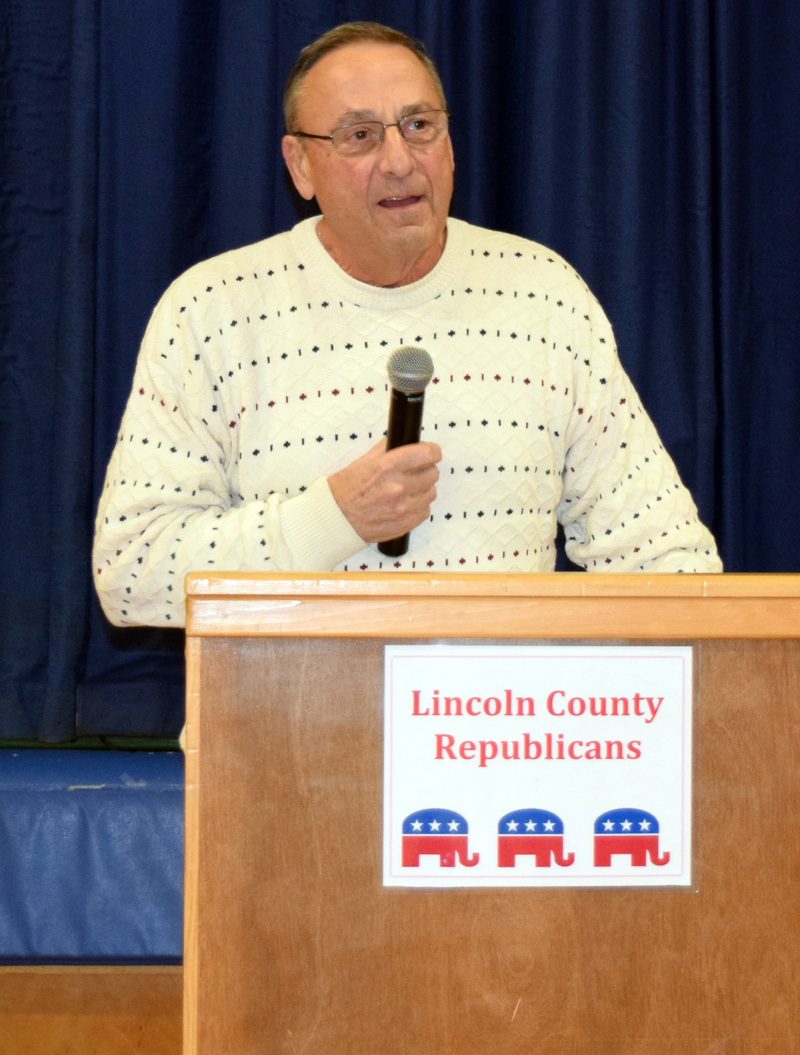 While the Democratic primary field has 13 candidates, the governor took aim at Maine Attorney General Janet Mills as a threat to his legacy.

“I will tell you right now, she’s corrupt,” he said.

Mills “will undo everything … the money in the bank, the taxes, the structural gap, gone. It’s all going to come back, so we need to get together and get this party fixed,” he said.

In his calls for party unity, the governor specifically referred to the need for himself, Fredette, and Thibodeau to work together.

“We need to bury the bad blood, bury the hatchet of the past, and we have to move forward,” he said.

He urged the Republican gubernatorial candidates to be civil to one another.

“The Democrats never fight in public,” he said. “We haven’t learned that yet. We need to learn it this election.”

Fredette, of Newport, was the first gubernatorial candidate to speak. Fredette is an attorney and serves as a lieutenant colonel and judge advocate general in the Maine Air National Guard’s 101st Air Refueling Wing.

Fredette touted the House’s cooperation with LePage to sustain his veto of the 2018-2019 biennial budget and win concessions from Democrats.

Mason, of Lisbon Falls, is the youngest person in Maine history to preside over a Senate session, according to his campaign website. “Maybe that’s what the state needs,” Dow said. “Maybe it needs fresh, young ideas.”

“He is a worthy candidate and he has the energy to do the things that need to be done,” Dow said.

Mayhew, of China, talked about her work to balance the DHHS budget and shrink the welfare rolls.

“It is far more compassionate to help someone earn their first paycheck than their first welfare check,” she said.

She called for the elimination of the state income tax. “We gotta get government out of the way and then we are going to have businesses that can prosper and families that can thrive and communities that can succeed and we will have a robust economy,” she said.

She criticized the “welfare-industrial complex” in Augusta for resisting welfare reform. “They don’t want any of these programs disrupted because it’s their revenue stream,” she said.

Moody, of Gorham, painted himself as a business-friendly outsider.

“Maine is a blue-collar state and I’m a blue-collar guy, and we’ve turned our back on blue-collar Maine,” he said. The state needs to make it easier for teenagers to enter the workforce, he said.

“We all want our children to be safe and secure, but by making it easier for them, we haven’t made it better for them,” he said.

Thibodeau’s sister, Barbara Ford, spoke on his behalf. Thibodeau, of Winterport, was at his granddaughter’s first birthday party, she said.

Ford spoke about Thibodeau’s business experience as co-owner of a snowshovel manufacturer and a tractor dealership. She presented a pink snowshovel to Ann LePage as a symbol of Thibodeau’s readiness to work with the governor.

After the speeches by the gubernatorial candidates, candidates for other federal, state, and regional offices spoke.

State Sen. Eric Brakey, of Auburn, and Max Linn, of Bar Harbor, campaigned for the party’s nomination for U.S. Senate.

Brakey was on the attack against the incumbent, U.S. Sen. Angus King.

“People say, you know, he’s got that really nice mustache. He drives a motorcycle. He even got us a lobster emoji. I mean, what’s not to like about that?” Brakey said. “He’s also spent us trillions of dollars into debt, he left Maine a billion dollars in the hole, he handed out billions of dollars in corporate welfare, he tramples our Second Amendment and our Fourth Amendment, he voted to use American taxpayer dollars to send weapons to groups in Syria allied with ISIS which end up crossing borders and being used against our own soldiers on other battlefields.”

Linn, a financial planner, has faced criticism from Brakey for his support of then-presidential candidate Barack Obama in 2008 and his own run for Congress as a Democrat in Florida the same year.

Linn defended his past involvement with the Democratic Party and attempted to sell himself to local Republicans as an outsider and a strong supporter of President Donald Trump who will take a hard line on immigration and trade policy.

“Unlike my opponent, I am not a member of the political class,” he said.

Dr. Mark Holbrook, of Brunswick, will challenge U.S. Rep. Chellie Pingree in the 1st Congressional District for the second time this year.

Holbrook described himself as pro-life and as a “Patriot-level life member” of the National Rifle Association. While people often call him too conservative for the district, the district has more independents than Democrats or Republicans, he said.

District Attorney Jonathan Liberman addressed the caucus. Liberman spoke about the recent conviction at trial of a truck driver who, while under the influence of alcohol and drugs, caused an accident that killed two people on Route 17 in Washington in 2016.

“If you don’t have an experienced trial prosecutor running this office, things like that aren’t going to happen,” Liberman said.