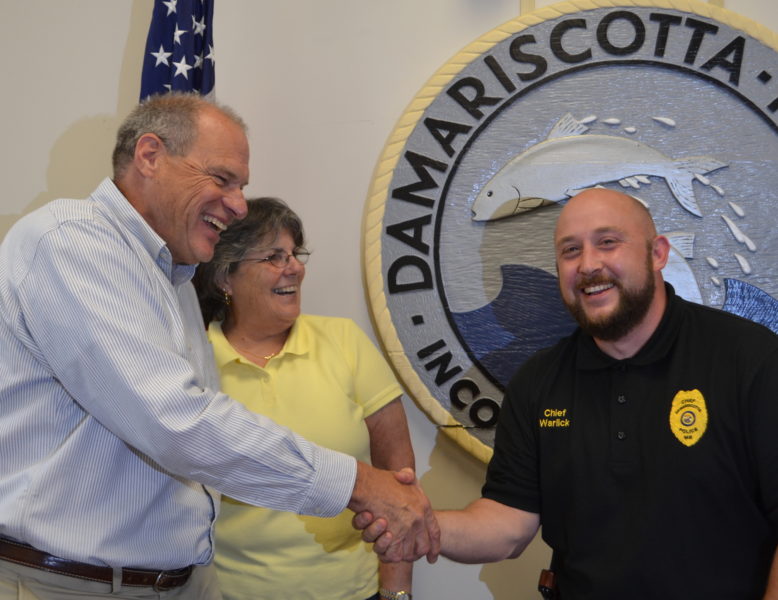 Damariscotta Town Manager Matt Lutkus (left) shakes hands with Damariscotta Police Chief Jason Warlick as Robin Mayer, chair of the Damariscotta Board of Selectmen, looks on. The board confirmed Warlick as the town’s police chief during its meeting Wednesday, July 19. (Maia Zewert photo)

The Damariscotta Board of Selectmen, on Wednesday, July 19, voted unanimously to confirm the appointment of Jason Warlick as the town’s police chief.

Town Manager Matt Lutkus had announced his appointment of Warlick as chief in an email to the selectmen Friday, July 14.

“I have tremendous confidence in Jason Warlick,” Lutkus told the selectmen July 19. “For the past several months, as acting chief, he has done an outstanding job.”

The town will pay Warlick $55,000 per year with the possibility of a 3.5 percent increase after a performance review two years into the role.

Warlick will split his time between patrol and his administrative and leadership duties.

The town will pay Warlick four months’ salary if it terminates the contract.

Warlick first joined the Damariscotta Police Department as a reserve officer in June 2011. He became a full-time officer in March 2013 and was promoted to sergeant the following year.

“During the past six months, Chief Warlick has clearly demonstrated that he has the skills, knowledge, and leadership ability to manage the law enforcement function in Damariscotta,” Lutkus said in his email to the selectmen July 14. “His job performance as an officer since 2011, and now as acting chief since January, has earned him very positive comments from the community and respect from co-workers both inside and outside of the department.”

Damariscotta resident Jim Campbell expressed concern about the tenures of the three previous police chiefs. Young was the third Damariscotta police chief to resign after being placed on administrative leave in the past six years.

Both Lutkus and board of selectmen Chair Robin Mayer said they hoped Warlick would remain chief in Damariscotta for a long time.

“My only fear is we’ll lose him to a bigger agency down the road, but I hope not,” Mayer said.

Warlick will take the oath of office at the next selectmen’s meeting, on Tuesday, Aug. 1. The meeting will begin at 5:30 p.m. in the town office.