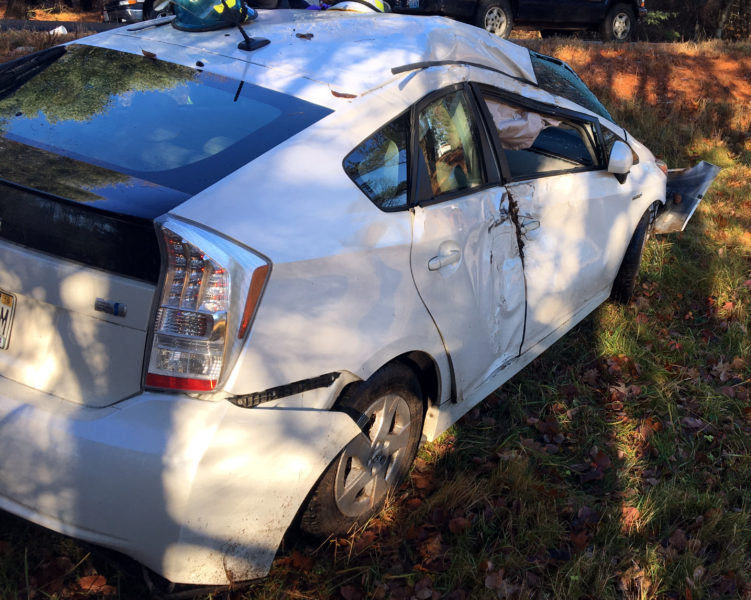 The driver of a 2010 Toyota Prius is at Maine Medical Center in Portland after an accident at the intersection of Biscay Road and Lessner Road in Damariscotta the morning of Friday, Dec. 2. (Photo courtesy Sgt. Jason Warlick)

A Damariscotta woman sustained serious but non-life-threatening injuries in an accident at the intersection of Biscay and Lessner roads in Damariscotta on Friday, Dec. 2. 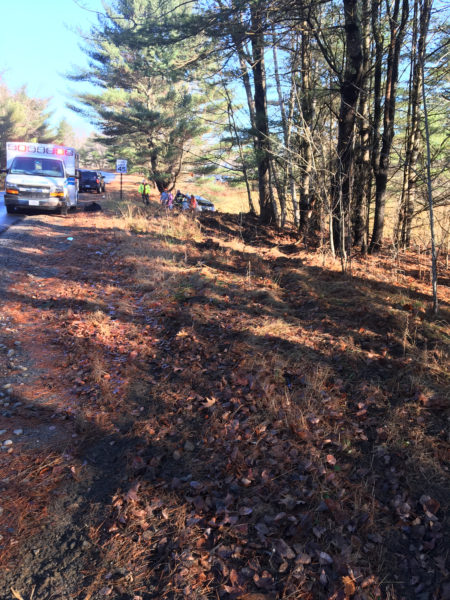 Tire tracks alongside Biscay Road in Damariscotta show the distance a 2010 Toyota Prius traveled after going off the road the morning of Friday, Dec. 2. (Photo courtesy Sgt. Jason Warlick)

Dorothy Brosseau, 75, was driving a 2010 Toyota Prius on Lessner Road toward Biscay Road at the time of the accident, according to Sgt. Jason Warlick, of the Damariscotta Police Department.

While approaching the stop sign at the intersection, Brosseau appears to have accidentally pressed the gas pedal instead of the brake, according to Warlick. The vehicle crossed Biscay Road, left the road on the other side, struck a large tree, and came to rest in a muddy area.

The Central Lincoln County Ambulance Service took Brosseau to LincolnHealth’s Miles Campus in Damariscotta. A LincolnHealth spokesperson said she had been transferred to Maine Medical Center in Portland.

Brosseau was wearing her seat belt at the time of the accident and the vehicle’s airbags deployed, according to Warlick.

The vehicle sustained damage to its passenger side and appears to be a total loss.

The accident was not a result of icy road conditions, Warlick said, unlike accidents in Bristol and Dresden the same morning. Damariscotta’s plowing contractor, Hagar Enterprises Inc., had salted and sanded the road some time earlier.

The Damariscotta Fire Department also responded to the scene.