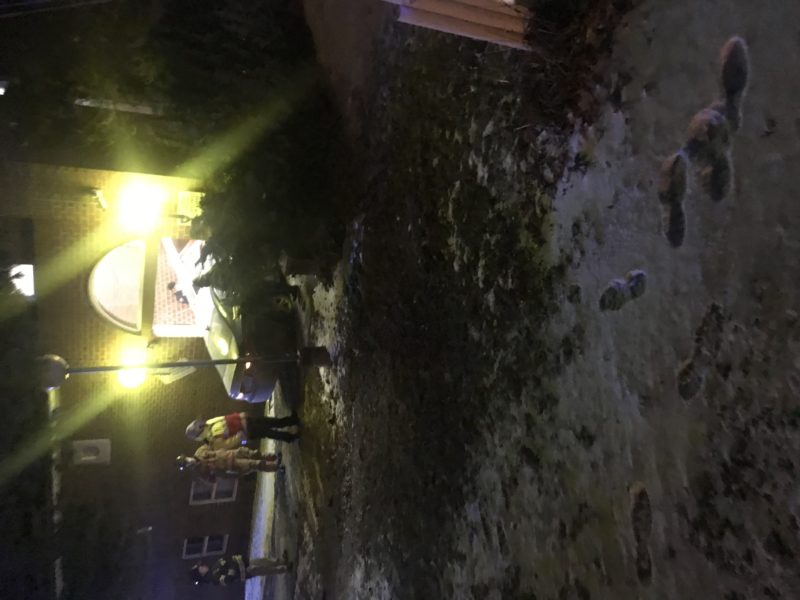 Emergency workers respond to a crash at the Lincoln County Sheriff’s Office in Wiscasset late Saturday, Jan. 30. The car was going south on Route 27 when it crossed the intersection with Route 1 and went straight through the front door of the sheriff’s office.

A defendant in the November 2020 robbery of Maxwell’s Market in Wiscasset crashed a car through the front door of the Lincoln County Sheriff’s Office, allegedly while under the influence, late Saturday, Jan. 30.

Kristen Crowley, 35, of Wiscasset, was driving a 2011 Hyundai Sonata south on Route 27, toward the intersection with Route 1, according to a press release from the Lincoln County Sheriff’s Office. Crowley “failed to negotiate the intersection” and instead drove straight across, off the other side of Route 1, and “directly into the front door” of the sheriff’s office.

The collision “pushed the entry door in” before a railing inside the lobby stopped the car, according to the release. Both airbags in the vehicle deployed. Crowley then “fled the scene on foot.”

Officer Jonathan Barnes, of the Wiscasset Police Department, apprehended Crowley on Federal Street in Wiscasset at about 11:55 p.m., 13 minutes after the report of the collision, according to the release. She was taken to LincolnHealth’s Miles Campus in Damariscotta for treatment of non-life-threatening injuries, then taken to Two Bridges Regional Jail in Wiscasset.

Crowley faces charges of leaving the scene of an accident, operating under the influence, and violation of condition of release, in addition to the pending charge of robbery.

Crowley and her boyfriend, Shane Lemont, allegedly robbed Maxwell’s the morning of Nov. 27, 2020. Lemont entered the store on Route 27, displayed a pistol, and demanded cash, fleeing with about $300 to a waiting car, according to police.

As of Tuesday, Feb. 2, insurance appraisers had yet to review the damage and the sheriff’s office did not have an estimate or time frame for repairs. In addition to the door and railing, the crash damaged a support beam.

The front door and doorframe to the Lincoln County Sheriff’s Office lies on top of a car after a crash in Wiscasset late Saturday, Jan. 30. The driver was operating under the influence, according to police.