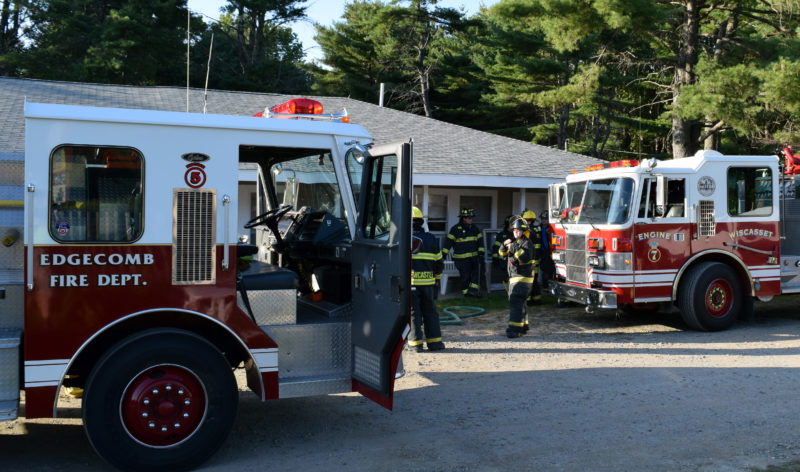 Edgecomb and Wiscasset fire engines respond to an electrical fire in a building at Pioneer Motel in Edgecomb on Saturday, Sept. 2. (J.W. Oliver photo)

A motel guest with a coffee mug and a firefighter with a garden hose helped prevent an electrical fire from spreading at the Pioneer Motel on Route 1 in Edgecomb on Saturday, Sept. 2.

Firefighters from Edgecomb and three neighboring towns responded to finish the job and clear the building of smoke.

The fire appears to have started in an exhaust fan in a bathroom, according to Edgecomb Fire Chief Roy Potter.

Dave Luby, of Mooers Forks, N.Y., said he discovered flames in his room while he was eating a sandwich. He filled a coffee mug with water and threw it on the flames, then repeated numerous times until the flames were under control. He then notified hotel management, who called 911.

When more firefighters arrived, they cut a hole in the ceiling and found a couple of charred beams, Potter said. They extinguished hot spots and used special fans to clear the building of smoke.

In addition to the Edgecomb Fire Department, the Boothbay, Newcastle, and Wiscasset fire departments responded, as well as Central Maine Power Co., the Lincoln County Sheriff’s Office, and the Wiscasset Ambulance Service. CMP shut off power to the building during the response.

The last firefighters cleared the scene at 6:27 p.m.