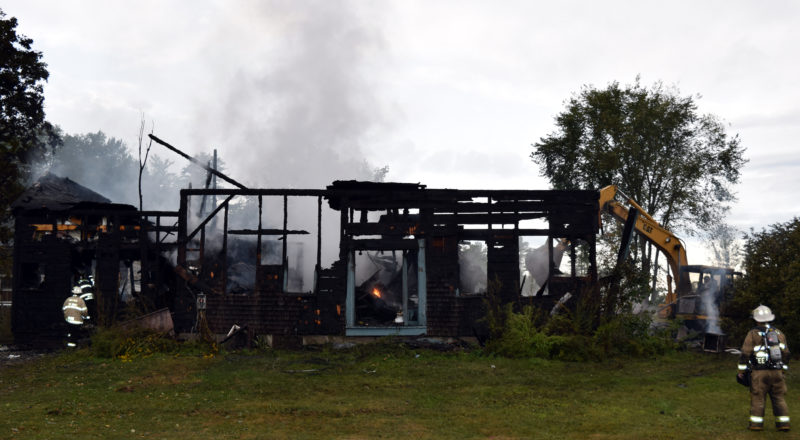 Firefighters and a local contractor work at the scene of a fire at 571 Town House Road in Whitefield the morning of Sunday, Sept. 3. A family of six escaped the fire at the 1850s farmhouse, which was once a hospital. (J.W. Oliver photo)

A family of six and their dog escaped a fire at an 1850s farmhouse in Whitefield early Sunday, Sept. 3. The house burned down and two cats are missing, but firefighters saved a nearby building with more animals inside.

Homeowners John and Melanie Pagurko and their four daughters were asleep when a smoke detector went off, according to John Pagurko. He got the family out of the house and attempted to douse the flames himself, but the fire grew quickly.

John Pagurko credited his wife’s attention to the smoke detectors, ensuring they were in working order and keeping batteries in them, with saving their lives.

“We wouldn’t have been here it if wasn’t for the smoke alarms,” he said.

The two-story farmhouse at 571 Town House Road was a hospital, Cottage Hospital, for a time beginning in the 1920s, according to John Pagurko. Area residents still stop by to say they were born there.

The nearby building, which Pagurko called the shop, was built in the 1920s. The shop once adjoined the house and was part of the hospital.

The Pagurkos now operate a pig farm, Big Daddy’s Farm, at the property.

The fire started in the area of a laundry room near the back of the house, according to Whitefield Fire Chief Scott Higgins. When the first firefighter arrived on scene, the house was already “pretty well gone,” he said.

With no chance to save the house, firefighters focused on keeping the shop wet and preventing the fire from spreading. John Pagurko said there was fuel in the shop as well as the animals.

The precise cause of the fire is unknown, but it probably started as an electrical fire, according to Higgins.

The firefighters had the blaze under control in about 30-45 minutes, according to Higgins.

Due to the extensive damage to the structure, the house was not stable enough for firefighters to go inside and finish the job, according to Higgins. A local contractor, David Jackson, responded with an excavator to knock down the remains of the building.

The Pagurkos did not have insurance on the house, according to Higgins.

A steady stream of neighbors and members of the family’s church were stopping by Sunday morning to offer places to stay and other assistance.

Firefighters cleared the scene at 9:17 a.m.