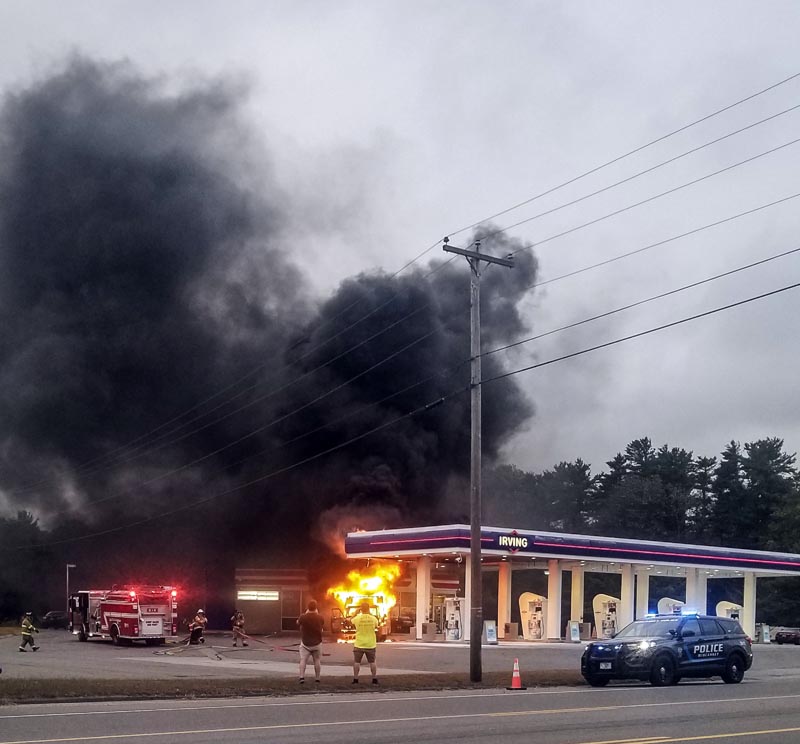 Observers watch as firefighters extinguish a burning camper at the Irving gas station and Circle K in Wiscasset on Sept. 24. The plume of black smoke could be seen from a mile away, according to bystanders. (Bisi Cameron Yee photo)

Fire engulfed a camper at the gas pumps at the Irving station and Circle K at 639 Bath Road in Wiscasset on Friday, Sept. 24.  There were no injuries but the camper and its contents were a total loss.

The fire was called in at 6:07 p.m. Officer Nathan Willhoite of the Wiscasset Police Department was the first to respond.

Willhoite said he saw a huge cloud of black smoke as he headed toward the scene. When he arrived the camper was completely ablaze and flames were igniting the overhang above the gas pumps.

Willhoite ensured the buildings were clear, and noted that two employees safely evacuated the store.

Wiscasset Fire Chief Robert Bickford said staff at Circle K did a really good job  shutting the pumps off quickly in response to the fire.

“They did everything they were supposed to do,” he said.

When the fire grew big enough, the overhead suppression system knocked down a big part of it Bickford said. Eight firefighters attacked the burning vehicle from both sides with hoses and responded to multiple flare ups as the contents of the camper, including furniture, appliances, and cabinetry continued to catch.

Bickford estimated they used 1,000 gallons of water to extinguish the blaze.

The camper was an older model and the fire was likely the result of a vehicle malfunction.

The canopy over the pumps sustained substantial damage on one side and will need repair. The pumps may still be operational since they did not sustain any direct flame impingement, according to Bickford, although possible heat damage could be a factor in the closest pumps.

The Circle K store itself was not impacted.

The operator of the camper, James Estabrook of Litchfield, said that he heard a backfire from the engine as he was pulling out and observed smoke coming from the vents. When he got out to check under the hood, he found the engine compartment on fire.

Willhoite said Estabrook, a female passenger, and a dog were able to escape the area of the vehicle without injury, but were highly distressed. The camper was the couple’s residence  and they lost everything to the flames.

Willhoite transported the couple to the Schooner Inn in Wiscasset where an unidentified good Samaritan paid for their room for the night. The Red Cross is providing additional assistance.

Both lanes of traffic on Route 1 remained open during the incident, but Willhoite said traffic was slowed as people pulled onto the shoulder to video the scene. He encouraged drivers and bystanders to keep moving to minimize risk of injury to themselves and others.