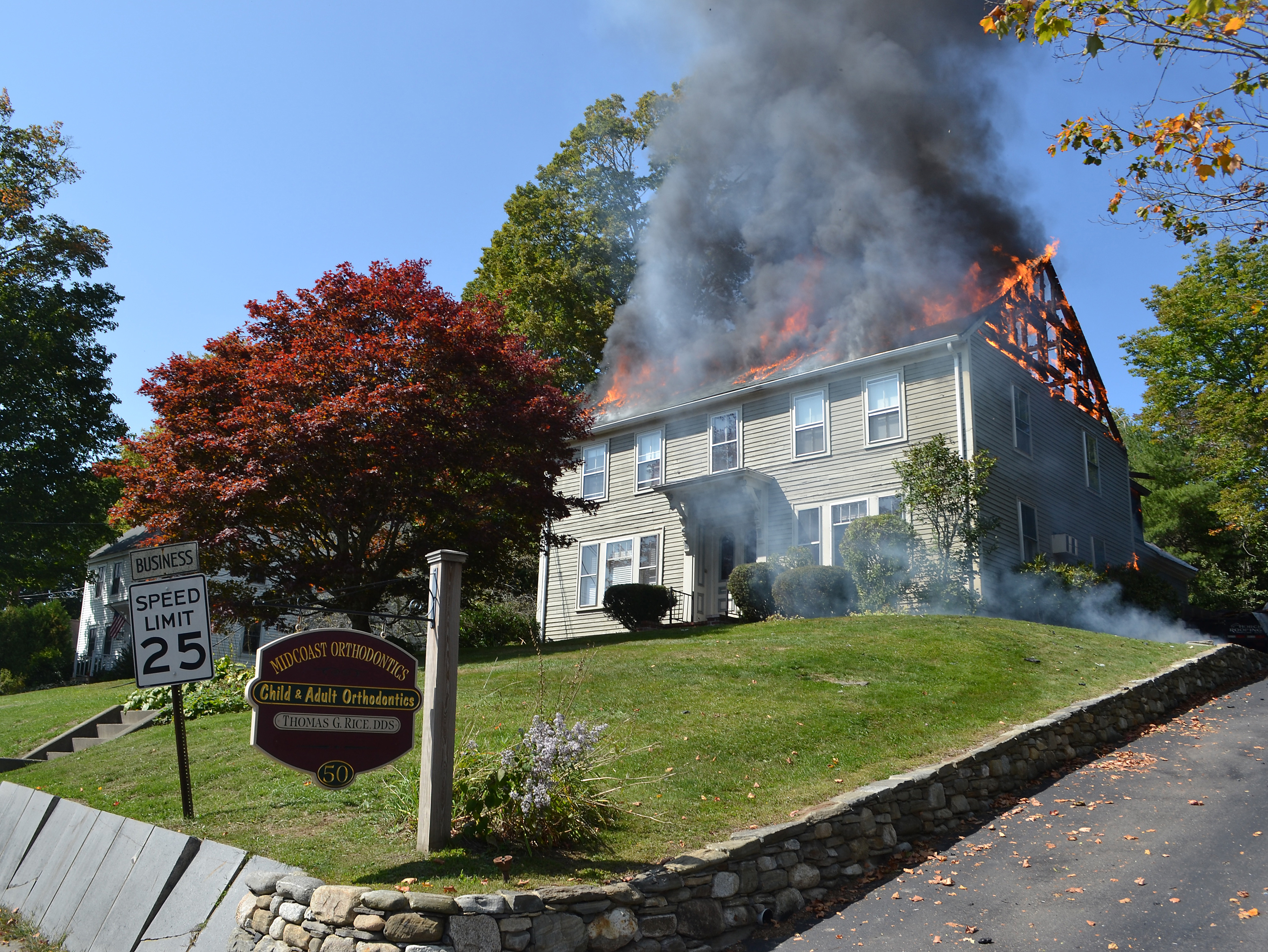 Flames and heavy smoke pour out of the roof of a building at 50 Main St. in Newcastle on Tuesday, Sept. 12. (Maia Zewert photo)

The Midcoast Orthodontics building at 50 Main St. in Newcastle is “likely a total loss” due to structural damage from a fire the afternoon of Tuesday, Sept. 12, according to Newcastle Fire Chief Clayton Huntley. The building contains three apartments in addition to the orthodontics practice.

The cause of the fire is under investigation. The Maine State Fire Marshal’s Office visited the scene Tuesday due to the building’s commercial use, as well as “potential, accidental third-party involvement,” Huntley said.

As of Wednesday morning, the State Fire Marshal’s Office is still gathering information, but believes the fire was accidental, according to Sgt. Joel Davis.

“We haven’t completed the whole investigation yet. There were people who were working on the building that we need to chat with today,” Davis said. “Nothing appeared to be suspicious. It looks to be an accidental fire originating from the roof area.”

A roofing company had been working on the building earlier in the morning, according to Huntley. He had not spoken to the workers and did not know what company it was.

One resident of the apartments was home when the fire started, but she was able to exit the building safely with assistance from the nearby workers, Huntley said. No injuries were reported.

The Lincoln County Communications Center dispatched the Newcastle and Damariscotta fire departments at 12:08 p.m. for a report of a structure fire in the vicinity of The Second Congregational Church and the Newcastle Publick House.

When Huntley arrived on scene, the flames were already through the roof of the building, and he immediately called for more help. Seth Hagar, of Hagar Enterprises Inc., happened to be nearby and provided “crucial help” when trucks started arriving on scene, Huntley said. 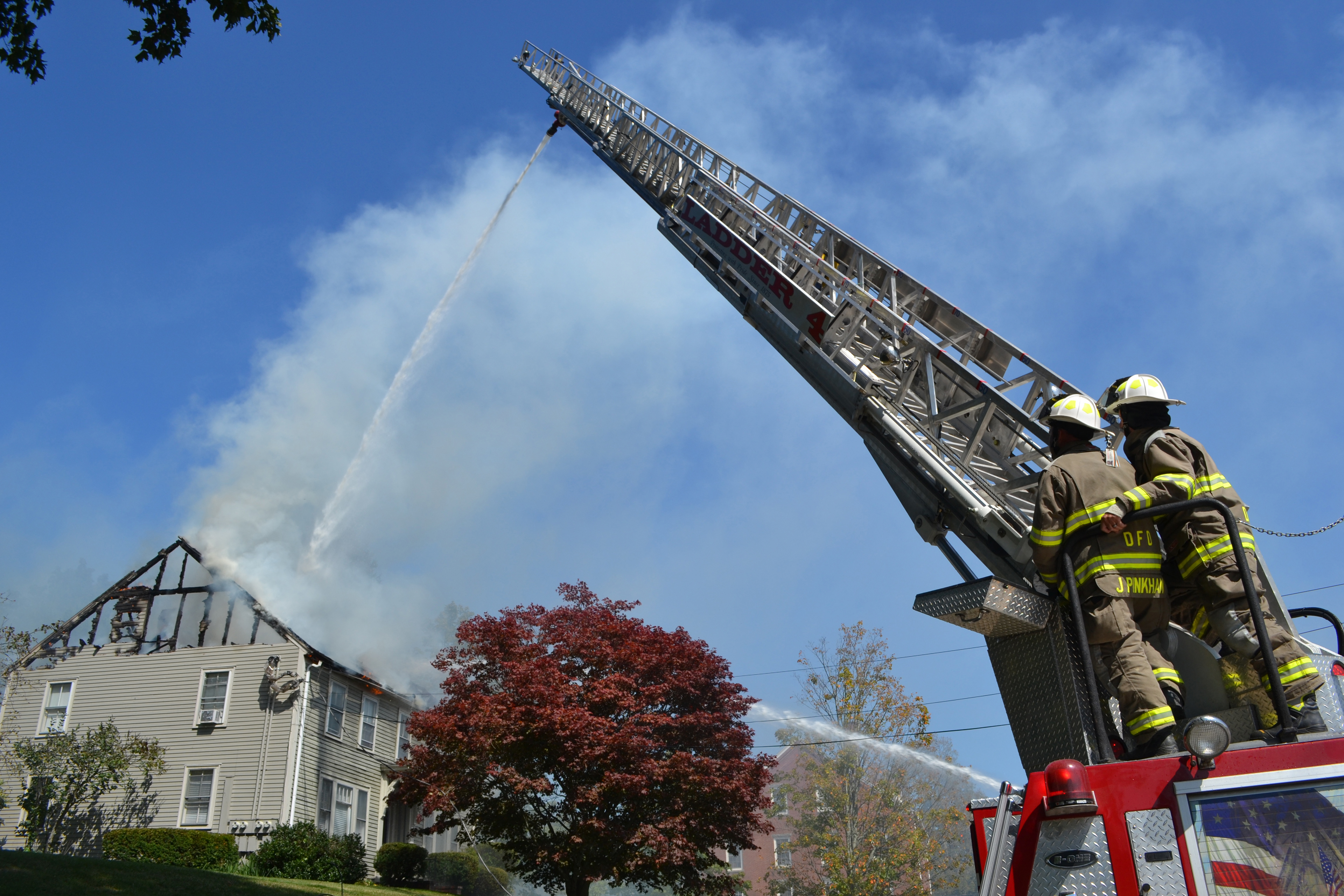 “He was really essential to helping us get set up when everyone was getting there, dragging hose lines to hydrants and getting the water flowing,” Huntley said. “I can’t say enough about how much that helped us. It’s just a display of the community jumping in and helping out when we need it.”

The firefighters quickly knocked down the fire from the ground before proceeding to an interior investigation for hot spots, Huntley said.

Main Street and the Route 1 northbound off-ramp were closed while firefighters fought the flames. The Lincoln County Sheriff’s Office provided traffic control. The roads reopened after the flames were extinguished.

The fire’s proximity to a home, as well as to The Second Congregational Church and the Newcastle Publick House, provided a challenge for fire crews, but the firefighters contained the fire, Huntley said. The fire was extinguished after 1 p.m. 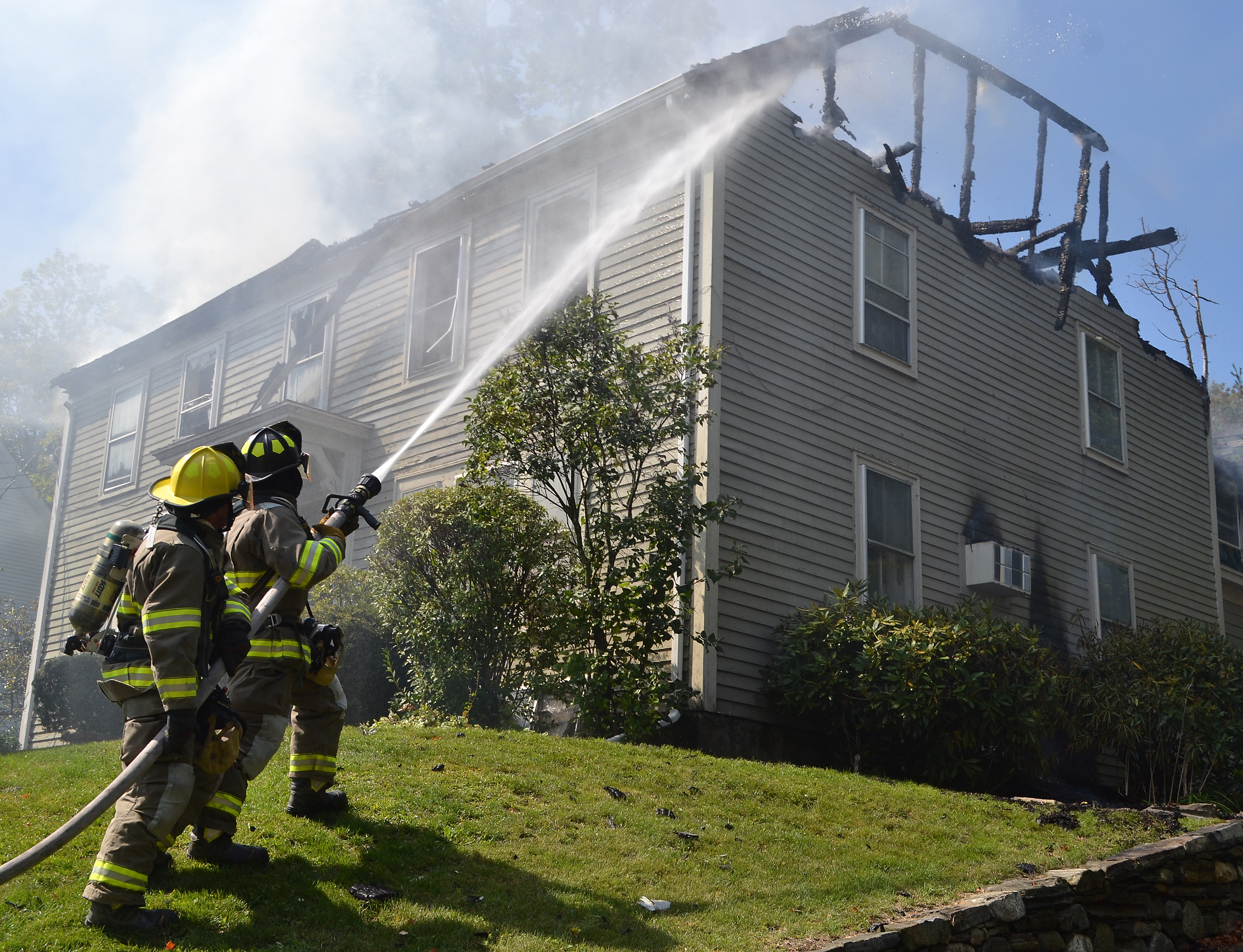 Firefighters douse hot spots in the remains of the roof at 50 Main St. in Newcastle. (Maia Zewert photo)

The first floor of the building, home to Midcoast Orthodontics, sustained smoke and water damage, Huntley said. The second-floor apartments sustained “substantial” damage and the attic and roof were destroyed.

The American Red Cross of Maine is working with the residents to ensure they have food, a safe place to sleep, and other essentials, according to a press release.

Dr. Robert M. “Rob” DeWitt Jr., of Damariscotta, owns the property. DeWitt was the orthodontist there for about 30 years before his retirement in January 2013. He now leases the practice space to Dr. Thomas Rice.

Rice also practices at 40 Summer St. in Bath, and will see his Newcastle patients there for the immediate future, he said. He hopes to find an office space in the Newcastle area as soon as possible, and invites anyone with suitable office space to call the office at 563-8756. The practice needs about 1,200-1,500 square feet.

“It’s rather upsetting to lose everything at one time,” Rice said, but the offers of help and the overall response from the community have been heartwarming.

The practice still doesn’t know what equipment it might be able to salvage, as computers and X-ray machines were still drying out.